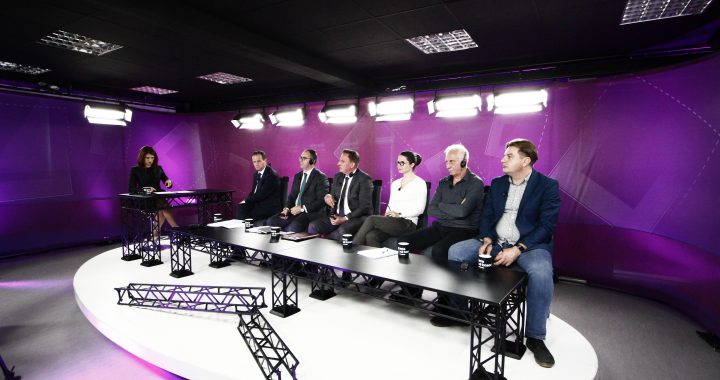 Challenges to the inclusion of Serb official documents in the Republic of Kosovo’s civil registry and the integration of Serb parallel structures into Kosovo’s justice system were discussed in BIRN’s latest #DebateforReal aired on Thursday.

The efforts to get rid of the parallel justice system in the north of Kosovo and the challenges faced by Kosovo Serbs to have access to civil registry and identification documents was  discussed in the most recent edition of #DebatiPernime, or #DebateforReal, a series of debates hosted by BIRN’s televised program, Jeta ne Kosove.

Judges, lawyers, government officials and citizens gathered in North Mitrovica to discuss the proper implementation of the Agreement on Justice reached in Brussels between Kosovo and Serbia in 2016, which foresees the integration of institutions in the northern part of Kosovo into the Kosovo justice system.

Citizens attending the debate also raised their personal problems with this system to the panelists, explaining the challenges of equipping themselves with official documents from the Republic of Kosovo, and having the same documents in the Serbian parallel system for many years after the war.

Enver Peci, President of the Supreme Court of Kosovo, as well as one judge from Mitrovica, said that the main problem is the finalized integration of the new court system in North Mitrovica but, nevertheless, according to him, there has been progress in resolving the cases.

According to him, one problem in this process is the lack of preparation of professional staff for translation of legal documents from Serbian into Albanian and vice versa.

Lavdim Krasniqi, director of the Kosovo Prosecutorial Council Secretariat, said they have managed to equalize the number of Serbian and Albanian prosecutors and are trying to do the same with the number of translators.

“The prosecution has been part of the integration agreement and, since 2017, access to justice has improved,” Krasniqi said. “The prosecutorial council has provided all the conditions for integrated prosecutors to commence their work and secured a number of translators.”

According to Krasniqi, they are trying to secure more translators, as the nine that they currently have is not sufficient.

Blerim Camaj, Director of the Civil Registration Agency, stated that since 2018 every citizen registered in parallel structures is entitled to be provided with all necessary documentation at the Office of Civil Registration.

Camaj also said that the municipalities in the north failed to accomplish their tasks as required because they have not recruited enough staff.

“Central level institutions have accomplished their tasks by providing access to all citizens in order to be outfitted with identification documents,” he said. “The local institutions were supposed to recruit employees in northern Mitrovica and they failed to do so. According to the agreement, 39 people were supposed to be employed.”

Milica Andric-Rakic, a journalist from the KoSSev portal, discussed her challenges getting the correct marriage certificate. She criticized the time period set within the decision that restricts which civil registration documents from parallel structures can be recognized by Republic of Kosovo institutions.

“The problem is last year’s decision. This is a valid decision for those who have completed their civil registration up to September 14, 2016, but excludes anything after this date,” said Andric-Rakic. “I was married in a Serbian institution on September 24 and I wasn’t included in this decision by a matter of ten days.”

“Does this mean we have to have another wedding? It would not be desirable for me having two marriages, in two different systems, at different dates,” she added.

Camaj said that according to the minister’s decision, Milica’s problem cannot be solved because marriages can only be recognized according to the decision between 1999 and September 14, 2016.

Nevertheless, Andric-Rakic expressed her satisfaction that citizens previously reliant on the parallel structures can now be outfitted with identification documents from the relevant institutions in Kosovo.

A decision from the Kosovo Ministry of Internal Affairs released in July 2018 allows all citizens currently registering birth, marriage and death certificates and other identity documents in Serb parallel structures between 1999 and 2016 to be able to register in Kosovo local municipalities from now.

Dejan Vasic, a lawyer from Mitrovica, said that the number of lawyers from the Serb community that can be integrated into the new system is relatively small.

“The court in Mitrovica was inoperable for ten years; therefore, the access to justice has been hampered. Of course, this has discouraged young and old lawyers to continue practicing this profession,” he said. “However, I expect this to change in the future, considering that the current court staff here in Mitrovica to a large extent are on the eve of retirement. I expect a large number of young people will join the legal profession,” Vasic said.

Nenad Radosavljevic, journalist from local television channel from north Kosovo, Mir, is of the opinion that if the judicial system was inoperable for the last 18 years, then it should be clarified whether citizens really need a court.

“If we imagine life for 18 years without having any communication and cooperation between police structures and Serbia’s justice system that has been installed in northern Kosovo,” said Radosavljevic. “Simply, we did not have a court, neither of Kosovo nor of Serbia, because the decisions of the Serbian courts could not be executed. The question now is whether we really need courts. We have lived for 18 years and nothing drastically has changed, in terms of the growth in the number of cases, criminalization or decriminalization.”

According to him, the Brussels agreement said that things would be coordinated, but in reality they were only served the agreement itself and nothing else to actually facilitate the process.

The Head of the Supreme Court of Kosovo, Enver Peci, added that these problems are not just a matter of the judiciary, but a reflection of political relations between the two countries as well.

For many of the panelists in the debate, professional Serbian-Albanian translation was raised as a problematic issue.

Radosavljevic said that the failure to deliver documentation in the parties’ official languages is due to the lack of professional staff.

“I am aware of this issue, because whenever I am in the Assembly and there is a request for translation, a really serious problem arises,” he said. “Furthermore, people still have not had the courage to ask for the establishment of a Slavic studies faculty at the University of Prishtina.”

“I think this frustration comes as a result of the last war, and the hatred created since then has shaped some prejudice and opposition to the idea. In this sense, if you are familiar with other languages, you are less patriotic,” he continued. “I think the law should be amended.”

Predrag Miljkovic, a citizen that attended the debate, shared his suggestions to Judge Peci for establishing an academy for teaching the Serbian and Albanian language to, in order to solve the translation issue.

“If we say that we are dealing with a major translation problem and that there is a lack of translators in Kosovo, then why are we not organizing an ad hoc academy, acknowledging that we lack 30 translators and that we will have them for next year? Subsequently, 30 young people could attend this academy and solve the issue,” Miljkovic suggested.

On the other hand, Vasic said that there are no translation problems at the court.

“Each court has its own translator, some translators are more focused, some are not, some are better, some are weaker, but a hearing has never been conducted without any translation,” Vasic said. “Whenever we had court hearings in Albanian, there was always an translator, and if the translator was not present, the procedure was rescheduled.”

Svetlana Rakic, coordinator for the Program of Social Inclusion of Minority Communities at the International Organization for Migration, IOM, is facing some problems with Kosovo’s citizenship requirements even though, so far, she has provided all the documents required, which is around 28.

However, Rakic said that her key problem is that Kosovo institutions require the apostille stamp on original Serbian documents in order to verify their origin, and that Serbia cannot issue this type of stamp on their official documents.

Camaj said that the apostille seal is required for all documents of other countries and not only Serbia.

Rakic had a question for the trio of panelists from Kosovo institutions, asking if they would support their staff by recommending that they learn the Serbian language.

Lavdim Krasniqi, director of the Prosecutorial Council Secretariat, said that not knowing the language is a barrier to all, but that he cannot impose language lessons on his staff. All possibilities must be available to them, he said, but it should not be mandatory.