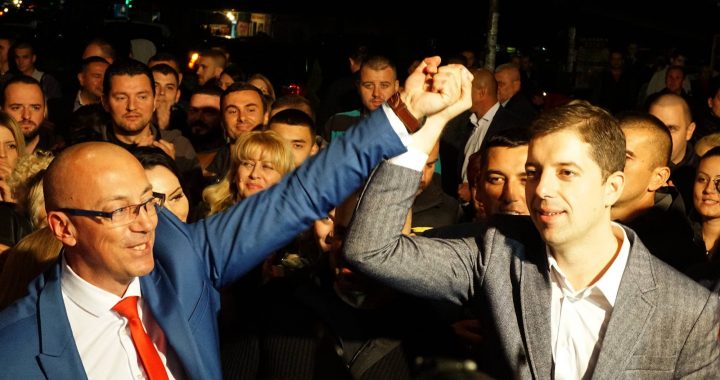 Goran Rakic, (L) the leader of Lista Srpska and Marko Djuric (R) , the director of the so-called ‘Office for Kosovo and Metohija,’ celebrating the victory of mayoral elections in October 2017 in North Mitrovica. BETA PHOTO/SASA DJORDJEVIC/EV).

Elections in Northern Kosovo: A one choice democracy

The lack of Kosovo Serb opposition parties running in Sunday’s mayoral elections in the north of Kosovo is another sign that democracy is ceasing to exist there, with even minimum democratic standards not being fulfilled.

On Monday, campaigning began for Sunday’s extraordinary mayoral elections in Kosovo’s four most northerly municipalities, North Mitrovica, Zubin Potok, Zvecan and Leposavic, which are all predominantly inhabited by Kosovo Serbs.

The elections were announced in April by President Hashim Thaci, after the mayors in the four municipalities, all representatives of the Lista Srpska party, resigned last November, in protest at the imposition of a tariff on Serbian goods by the Kosovo Government,

Despite the tariff still being in place, Lista Srpska will compete in the elections. Its leader and the former mayor of North Mitrovica, Goran Rakic, justified the party’s participation by stating that they do not want to see an Albanian being elected as a mayor in the north of Kosovo.

Three of the four mayors that resigned will stand again as candidates, while Serbian president, Aleksandar Vucic, has suggested that winning candidates from Lista Srpska may resign again if they are victorious.

Even more alarmingly, Lista Srpska will be the only Kosovo Serb political entity competing in the elections, inflicting harm on the very essence of democracy in the region.

Serbian opposition in Kosovo, that gather around opposition bloc “Savez za Srbiju” (Alliance for Serbia), have decided not to run at all, with many citing the murder of two former opposition members, Oliver Ivanovic and Dimitrije Janicijevic, and a lack of equal conditions for campaigning as reasons not to partake.

In previous elections, Kosovo Serbs at least nominally had a choice. Although Lista Srpska have won every election held in the region overwhelmingly, at least there were political opponents representing different voices for Kosovo Serbs living in the north. For the upcoming elections: there is only one option: Lista Srpska.

On the ballot paper, there will be three options in the mayoral elections; Lista Srpska, the Democratic Party of Kosovo, PDK, and Vetevendosje. Nonetheless, knowing the reality and the history of how Kosovo Serbs have voted, it would be illusory to believe that Kosovo Serbs in the north may have doubts over whom to vote for.

The lack of choice is a vivid portrait of the state of things in the north of Kosovo, where there is neither democracy, nor freedom of choice. This is the moment to ask ourselves what happened to democracy, and where our right to choose is when we don’t have candidates to choose between. Why do we even need to go to elections, when the winner is already obvious?

It is clear that these elections are organized in order to follow the law, and establish some kind of institutions in the north, but in this situation even the law seems to be nothing more than ridiculous. The law and the democratic process are being followed in order to create something that does not respect democratic principles at all.

The irrationality of mayors resigning, competing in the election and then quite possibly resigning again, all with the support of Vucic, without whose permission nothing happens, all add to the madness of the situation. It is a vicious cycle of playing games, with the same result and same ruler.

With the elections approaching, Kosovo Serbs in the north have only one option: one party, the same candidates who may resign again, no one to oppose them, and only one opinion in a political race for office. Is this democracy? Is this freedom of choice?

For some years already, the free will of Kosovo Serbs has been restrained, and the elections on May 19 will only help entrench this position. They don’t have right to choose, but most probably, as is traditional, Kosovo Serbs will be instructed to go to the polls and select the only party and candidate they can.

The Serbian Government, under the rule of President Aleksandar Vucic, has always pointed to the same ideal: that Kosovo Serbs should be united under one party. After the murder of Oliver Ivanovic and no other strong opposition leader emerging, this apparently is now a closed business. Serbs in the north of Kosovo have only one political representative, personified by the party created and ruled by Belgrade.

The type of election that is happening in the north of Kosovo is traditionally only seen in autocratic regimes where the winners are known even before the elections are announced. There are many factors that assure the existence of democracy, but free elections have always been a focus, and while there are different definitions of free elections, one thing is for sure: It is illusory to think of democracy without electoral competition.

The elections will pass, Lista Srpska will win, Serbian politicians will celebrate the victory as usual, but ordinary citizens will have lost the chance for any democratic participation. In all of this degradation, the scrapping of the freedom of citizens and denial of the democratic process, only one question remains: What else needs to happen to mark the burial of democracy?

Nevena Radosavljevic is a freelance journalist and trainer in peace-building and conflict transformation from Leposavic. She holds an MA degree in Peace and Security from the Institute for Peace Research and Security Policy at the University of Hamburg.