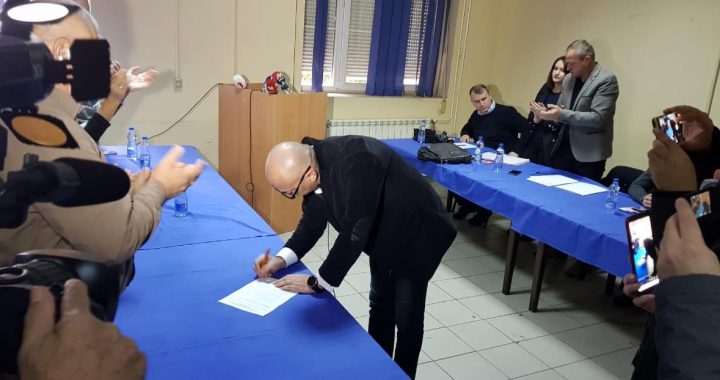 Prior to a protest by Kosovo Serbs against the 100 per cent tariff imposed on Serbian products, mayors of Serb majority municipalities in northern Kosovo have resigned from their posts.

Mayors of Leposavic, Zubin Potok, North Mitrovica and Zvecan – the four Serb-majority municipalities in northern Kosovo – handed in their resignation prior to a protest by Kosovo Serbs opposing the 100 per cent customs tariff for Serbian products imposed by the Kosovo government on November 21.

Goran Rakic, mayor of North Mitrovica, said that his resignation came as a result of “the discriminatory policies of the Kosovo government against Kosovo Serbs.” He stepped down during an extraordinary session of the North Mitrovica municipal assembly.

Speaker of the North Mitrovica municipal assembly Dejan Gurisic said that “Albanian institutions from Prishtina are not legitimate for northern Serbs anymore,” confirming that the mayors of Leposavic, Zubin Potok and Zvecan have also stepped down.

“Governing institutions in North Mitrovica and municipal services will not function and the municipal assembly will not gather. This decision is final and will remain in force until all discriminatory measures of Prishtina are withdrawn,” Gurisic said.

Marko Djuric, head of the Serbian government’s office for Kosovo, told Serbian media in Belgrade that mayors of these municipalities announced their resignation, and that other institutions will not operate until the tariff is withdrawn.

Kosovo Serbs are scheduled to protest at 12:00 pm on Tuesday in front of the Mitrovica Court building against the tariff against Serbian products, as well a Kosovo Police action that resulted in the arrest of three suspects for Oliver Ivanovic’s murder.

Nikola Kabasic, head of the Basic Court of Mitrovica, sent a letter to ambassadors and heads of international missions in Kosovo, urging them to use their authority to aid the withdrawal of the tariff in order to “normalize the situation in Kosovo” and “return trust to Serb citizens.”

Kabasic said that the Kosovo government’s decision to embargo Serbian products “has not only exacerbated human rights but has also put into question the existence of the Serb population in Kosovo.”

RTS, the Serbian public broadcaster, reported that employees of the court in North Mitrovica left their workplace in solidarity with the protesters.

The imposition of customs tax to Serbia was hiked to 100 per cent last week after the initial imposition of 10 per cent tax increase November 6. Kosovo Prime Minister Ramush Haradinaj has said that the withdrawal of the tax tariff would happen only when Serbia “recognizes the sovereignty” of Kosovo.