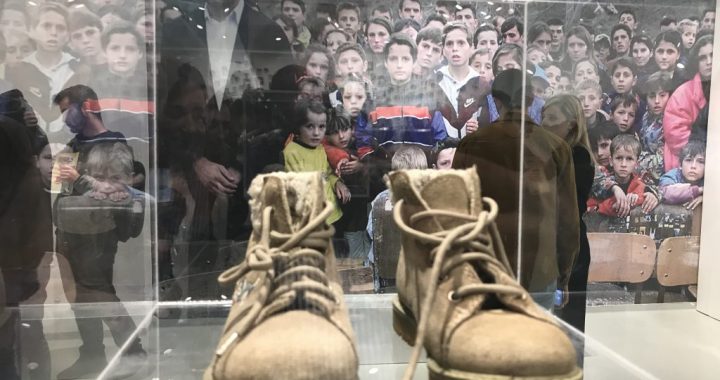 "Once upon a time and never again", an exhibition that remembers the 1,024 children killed in Kosovo between 1998-2000. Foto: Valon Fana.

Children killed in the Kosovo War commemorated at new exhibition

The “Na ishte një herë që kurrë mos qoftë” (“Once upon a time and never again”) exhibition, which opened in Prishtina on Monday, remembers the 1,024 children killed in Kosovo between 1998-2000.

Twenty years ago, seven members of the Duriqi family were executed in the town of Podujeva. On Monday, two decades later, at an exhibition organized by the Humanitarian Law Center in Prishtina, Enver Duriqi retold through tears how his family was killed on March 28, 1999.

Alongside his parents and his wife, four of Duriqi’s children were killed, two daughters and two sons. “The killing of my children happened on March 28, 1999 in the center of Podujevo. The youngest was 21 months and the eldest was 9 years old,” he recalled, holding his 9-year-old son’s school report card.

The Duriqi family came to the city to find shelter after relentless attacks from Serbian forces on the villages in the Podujevo region.

“My family was first sheltered with the Bogujevci family, when the ethnic cleansing started and we had to move the children from our village. They were caught in Podujevo, and executed together with Bogujevci family.”

At that time, Duriqi was a member of the Kosovo Liberation Army, KLA, and he is now a war invalid.

He remains dissatisfied with Kosovo institutions for failing to bring justice for the war crimes committed by Serbian forces. “They haven’t moved a millimeter on this issue,” said Duriqi, looking the photos of his children exhibited at the Center for Documentation at the “Hivzi Sylejmani” Library.

The personal effects of the Duriqi family were exhibited among other books, notebooks, report cards, shoes, clothes, school bags, toys, photos and short stories remembering Kosovo’s children that were killed during the war, who comprise nearly ten percent of the more than 10,000 people killed in total. Another 109 children are still missing from the war, among the 1,600 people overall.

Mejreme Kelmendi, another parent whose children were killed, came from Gjakova to see the exhibition. It was painful for her to remember the details of the deaths of her two sons, Besim and Haxhi, who were 12 and 10 years old. “In this exhibition, I see the blanket with which I covered my children,” she recalled.

“It would be better that those bullets would have caught me and not my children… so, I would not have seen their photos here,” she told BIRN, desperation in her voice.

Like Enver Duriqi, Kelmendi is also disappointed with Kosovar institutions’ handling of war crimes and hopes that there will be more commitment to bringing justice in the future.

“We have a lot of pain, and we need to gain a bit of courage because we are so tired,” she said.

The exhibition is open to visitors at the “Hivzi Sylejmani” library in the Dardania neighborhood of Prishtina until May 2020.