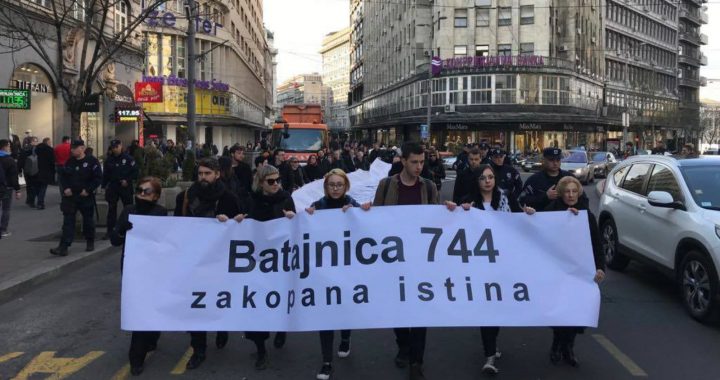 Serbian human rights activists commemorated the Kosovo Albanian victims of war crimes in 1999 with a protest march to the parliament building in Belgrade.

Activists from the Humanitarian Law Centre, the Youth Initiative for Human Rights and the Women in Black peace group marched to the Serbian parliament on Tuesday to commemorate Kosovo Albanians who were killed in the Kosovo war 20 years ago.

The founder of the Women in Black anti-war NGO, Stasa Zajovic, told media that in the past four years, Serbia has brought no criminal charges for crimes against Albanians in Kosovo.

“We also want to appeal to the citizens of Serbia to stop the silence about these crimes, to inspire compassion, empathy and solidarity,” Zajovic said.

Marko Milosavljevic from the Youth Initiative for Human Rights said that the dominant narrative in Serbia does not include innocent Albanian victims, but only focuses on Serbian ones.

“[Mass graves] are not spoken about; we’ve had 20 years of silence,” Milsavljevic said.

About 20 activists unfurled a banner in Belgrade’s central Knez Mihailova street with the names of 744 Albanian victims who were discovered in the Belgrade neighbourhood of Batajnica in 2001.

They symbolically covered the banner with dirt, then cleaned it up and carried it to the Serbian parliament building nearby, along with another banner that said “Batajnica 744 – the buried truth”. Police ensured security during the event.

The remains of dead Albanian civilians have been found in mass graves at four locations in Serbia since 1999.

A total of 744 bodies were found at a police training centre in the Belgrade suburb of Batajnica, 61 at the Petrovo Selo training camp, 84 near Lake Perucac and 52 in a quarry in Rudnica.

They fell victim to President Slobodan Milosevic’s offensive against Kosovo Albanians, which was ended after 78 days of NATO air strikes against Yugoslavia in 1999.

Serbian Public Security Department chief Vlastimir Djordjevic was sentenced to 18 years in prison by the International Criminal Tribunal for the Former Yugoslavia for the murder and persecution of Kosovo Albanians, including direct involvement in the cover-up that attempted to conceal the killings.