The first person to speak on television about her experience of wartime rape in Kosovo, Vasfije Krasniqi Goodman told the story of her lengthy legal battle in the Kosovo courts.

Breaking the silence about rape in Kosovo, Vasfije Krasniqi Goodman, a survivor of wartime sexual violence, has become the first woman to speak out about her experience during the Kosovo war between 1998 and 1999 in an interview.

Krasniqi Goodman sought justice before the courts in Kosovo, but in 2014 the Supreme Court acquitted two Serb policemen, initially indicted for her rape, on all charges.

Although she broke a taboo by speaking out on her ordeal and inspired many with her public testimony, human rights organizations are warning that justice appears to remain beyond reach for Krasniqi Goodman, and for many other survivors of wartime rape.

“It is very difficult to prove sexual violence in court, especially when the crime was committed a long time ago… there is often no forensic evidence, a lack of other material evidence and limited possibilities of finding any other evidence or eye witnesses,” Bekim Blakaj, the director of the Humanitarian Law Centre of Kosovo, HLC, told BIRN.

Blakaj added that identification of the perpetrators is a major challenge.

“Judges are sensitive about bringing verdicts in full accordance with the highest standards of respect for the rights of the accused, and often ‘reasonable suspicion’ is not enough to sentence the perpetrators,” he said.

He added that this means the perpetrators of rape often go unpunished.

“In such cases, especially involving sexual violence, judges should not be so rigid. They need to put in extra effort to seek possible evidence that will enable them to bring a just verdict,” Blakaj said. 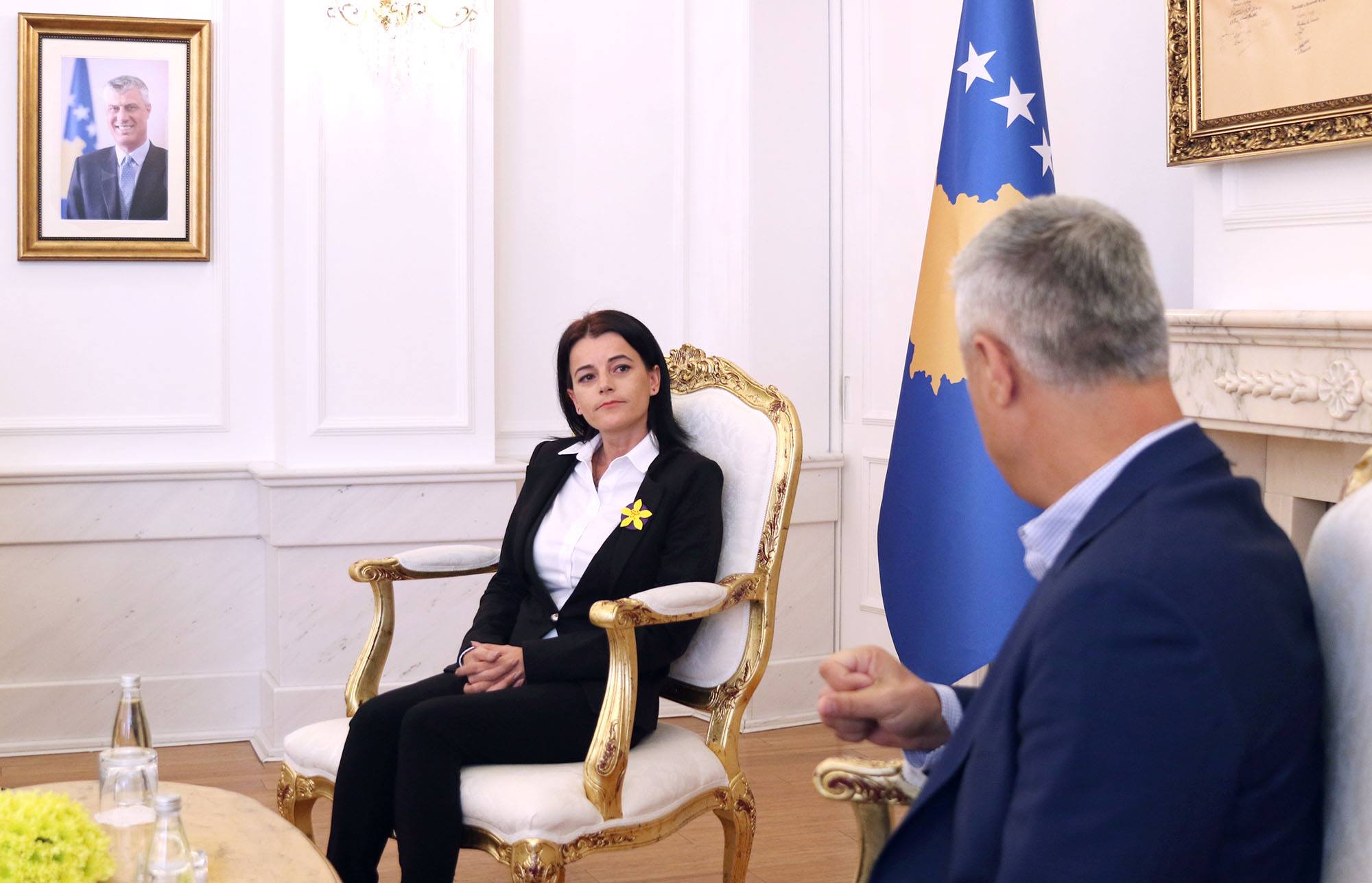 Vasfije Krasniqi Goodman after being decorated with the “Meritorious Citizen of Kosovo” by President of Kosovo Hashim Thaci on October 18, 2018. | Photo courtesy of the President’s Office.

Krasniqi Goodman was living in the small village of Stanoci i Ulet in Vushtrri with her parents and siblings when it all happened.

“On April 14, 1999 I was in the yard when I heard the door knock… I went to inside to tell my mother to open the door. We did not know if they’d come to kill us, or raid us,” Krasniqi Goodman said, recalling her ordeal on Tuesday with Kosovo’s public broadcaster, RTK.

She said a Serbian officer had arrived at the house and demanded to know where her father and brother were.

“Mother told him they were in Germany but he said, ‘No, they went to war’, and he came in and took me,” she said.

He told Krasniqi Goodman she was being taken to the police station to give a statement.

She soon realized she was not going to the police station after the car took a turn and ended up in the Serb-populated village of Babimoc, where she said the police officer raped her.

She said the officer told her: “You will pay for what your father and brother have done.”

“At that moment I just wanted to be killed with a bullet,” Krasniqi Goodman said.

Within hours, she said she was being raped again by another Serb, who was not in uniform.

He then took her back to the house. She felt she could not share her ordeal with anyone, until she later reported the case to the Kosovo Liberation Army, KLA.

Krasniqi Goodman was lucky to have the support of her family when she did this, which, in a socially conservative society, most of the other estimated 20,000 rape victims in the Kosovo war did not have.

Fearing stigmatization and even complete exclusion from society, thousands of them have lived in silence, some of them with serious health problems.

The negative perceptions of society and the difficulty in getting suitable medical treatment in a poor country like Kosovo has driven several of these rape victims to suicide.

The uncontested fact, supported by the Kosovo courts, is that Krasniqi Goodman was taken from her home in April 1999 by a uniformed person and raped twice in two different locations in Babimoc, by two individuals.

She began her battle for justice in 2012, when the Basic Prosecution in Prishtina issued an indictment for her case.

This accused two Kosovo Serbs, Jovica Dejanovic and Djordje Bojkovic, of war crimes against civilians and specifically of raping Krasniqi Goodman, who was a minor when the event occurred.

Within seven days they heard 12 witnesses, nine of which were invited by the prosecution.

On April 13, the court acquitted the accused of the charges, however, justifying this on the basis of legal violations in the course of the investigation phase with the identification of the accused by the victim and other witnesses.

The court said the process of identifying the accused through photos by the victim and witnesses contained irregularities, which meant that photographic identification could not be used as evidence.

The prosecution then appealed, after which the Court of Appeal of Kosovo gave a different verdict.

Its decision, issued on May 17, 2014, said there was sufficient proof of the guilt of Dejanovic and Bojkovic and sentenced Dejanovic to 12 years in prison and Bojkovic to ten.

The Court of Appeal assessed that the identification of the accused had been regular and that this proof was sufficient and convincing.

The decision of the court, composed of two EULEX judges, Manuel Soares and Annemarie Meister, and one local judge, Xhevdet Abazi, also said the court in Mitrovica had used a higher standard of identification of the accused through photos than Kosovo’s Criminal Code required.

The Court of Appeal accepted the existence of some violations in the process of the identification of the accused.

However, unlike the court in Mitrovica, it did not consider that they diminished the weight of the evidence.

The lawyers of the accused then filed a complaint against the appeal court’s decision, however.

Kosovo’s Supreme Court then annulled the verdict and acquitted both of the accused of war crimes.

This body was led for the first time by a local judge, Nesrin Lushta, alongside two EULEX judges, Willem Brouwer and Esma Erterzi.

The Supreme Court also focused on the testimonies of the witnesses and on the identification of the accused through photographs.

It said that “the descriptions of the perpetrators are general and unclear”, as a result of which it was not able to verify that the accused had committed the crimes.

On Tuesday, in her interview, Krasniqi Goodman said that no attorney in Kosovo had agreed to represent her, because they would not receive protection from EULEX to work in the Serb-majority north of Kosovo.

Krasniqi Goodman also said that one of her rapists still lives in Kosovo “and works for the Kosovo Police.” According to Daut Hoxha, spokesperson of the Kosovo Police, KP, Dejanovic was employed at KP between 2001 and 2017, when his contract was terminated. 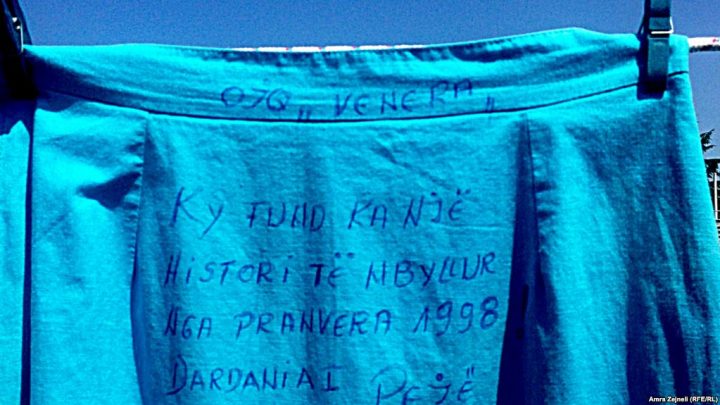 “This skirt has an untold history from the spring of 1998,” says one of the 5,000 dresses and skirts hung at the football stadium in Prishtina as part of an installation to honor victims of wartime rape in Kosovo. | Photo: REL

A report by Amnesty International said only a few of those held responsible for wartime rape in Kosovo have since been prosecuted.

The report said that in 2009, the International Criminal Tribunal for former Yugoslavia convicted three of the most senior Serbian political, police and military officials of joint criminal enterprise in war crimes and crimes against humanity in Kosovo, including for “sexual assaults” as form of persecution, and as a crime against humanity.

A fourth senior official was convicted in 2014 of “persecutions through sexual assaults, as a crime against humanity.”

In Serbia, two trials for rape in Kosovo have been concluded at the Special War Crimes Chamber in Belgrade. However, all were brought against Kosovo Albanian former members of the KLA; one resulted in a conviction.

In Kosovo, only three prosecutions for wartime rape have been completed; each ended in an acquittal after appeal, after the courts deemed that the evidence to identify and convict the alleged perpetrators was insufficient.

“Failed by UNMIK, failed by EULEX, it is not surprising that few survivors have any faith in Kosovo’s own justice system,” the Amnesty report reads.

The HLC has monitored Krasniqi’s case, and published a report that claimed there were a number of violations.

The report, “High profile trials: Justice Delayed” published in 2014, said the Basic Court of Mitrovica had handled the case poorly.

“HLC Kosovo considers the treatment, importance, and time given to this case very irresponsible,” the report reads.

“It is an extremely serious criminal offense which happened during the war and was part of systematic and pre-planned activities aimed at the intimidation of Albanian population and their removal from Kosovo.”

HLC focused on the importance of the testimony given by the victim in the process, which it says was not considered duly by the court.

“It is inexplicable … that the court did not take into account and honor the dedication of the victim and her family in their pursuit of truth regardless of the price they would pay in a conservative environment where rape is considered shameful for the victims and for their family,” the report said.

The ‘specter’ of the Special Court hangs over Kosovo