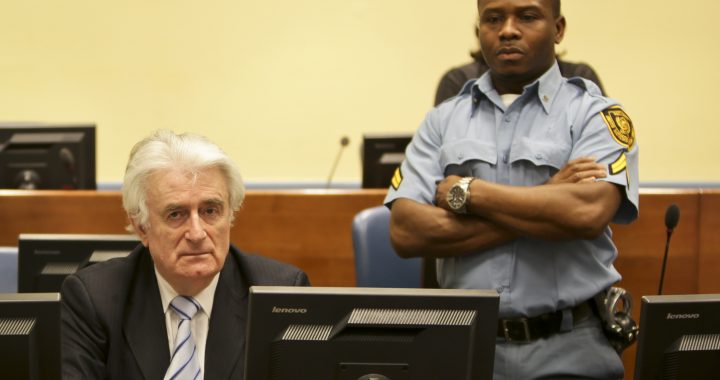 Radovan Karadzic during the trial at ICTY. Photo: BIRN.

Karadzic verdict creates only an illusion of justice

It is almost meaningless to celebrate the victory of ‘justice’ in the  Radovan Karadzic appeal verdict while the politics of denying war crimes flourishes all over the Balkans.

Years ago, while on a study visit to the International Criminal Tribunal for former Yugoslavia, ICTY, with a group of young people, we had the chance to follow the court hearings for Ratko Mladic and Radovan Karadzic from the visitors’ room. Being so close to the ‘genocide criminals’ was an uncomfortable feeling. Even more distressing was seeing the degrading gestures they made towards their victims, sitting next to us.

My empathy with the Mothers of Srebrenica was instinctive, the widows and mothers of the thousands of Bosniaks killed by Bosnian Serb forces under Mladic in the eastern Bosnian town in 1995. It was impossible not to think of how it would be for me to witness the former Serbian leader Slobodan Milosevic, or the others indicted for crimes in my own homeland of Kosovo.

I grew up with the idea that I had somehow to hide who I was as an Albanian – and a few years later my parents were sheltering my extended family escaping from the war, hearing of their imprisonment, of the disappearances and horrendous murders committed by the Serbian army and police – and finally being separated from my parents, expelled from Kosovo, like thousands of other Albanians. My childhood was well described in the indictment of Milosevic and others. Mladic and Karadzic are personifications of my perpetrators.

We left the room as the hearing session was closed for the public to meet representatives of the ICTY’s defence and prosecution. The anger that I felt in the courtroom grew as this language of justice made less and less sense to me. I struggled to find a balance between reason and traumatic emotions. I kept questioning what justice really means, and who defines it – what justice is to the victims.

Karadzic’s appeal verdict, sentencing him to life in prison, almost concludes the decades-long justice commitment of the ICTY. There is no doubt that it brings some satisfaction to the victims. But I am not sure it brings justice. The genocide in Srebrenica has been repeatedly denied, including by Serbia’s current leaders.

The statement of the ICTY chief prosecutor, Serge Brammertz, that Karadzic’s verdict sent an “important message that justice can prevail over evil” raises also the question of what that evil is. The genocidal act by itself? Does not it include its main drive, politics?

If not, we ought to face this problem of ICTY justice. If we call this verdict and others a victory for justice, while living amid the persistent denial of the crimes, the question of what ICTY justice means arises.

The domestic, political and social reality of the Mothers of Srebrenica, and mine as well, does not change much. Surveys show a high rate of dissatisfaction with the ICTY’s work among all the ethnic communities of the former Yugoslavia. A feeling of justice among them is almost absent. Meanwhile, the politics of the 1990s is very much alive. Victims live under the governance of the same politics, the same politicians and their former allies.

Brammertz’s own statement on the Karadzic verdict, noting that “opponents of the tribunal will claim that this judgment is a verdict against the Serbian people. I reject that in the strongest terms. Karadzic’s guilt is his, not his community’s,” unintentionally elaborates on this struggle.

The politics of impunity towards war crimes and genocide in former Yugoslavia has enabled this politics to maintain its power and continue governing. This is the politics that sustains the inter-ethnic divisions in both Bosnia and Herzegovina and Kosovo.

In Bosnia and Herzegovina, the political denial of war crimes has diminished any kind of justice and has prevented reconciliation in a state whose ethnic divisions are cemented in its constitution. In Kosovo, an equally intense politics of denial has been twofold: towards both the crimes and Kosovo’s statehood.

Serbian denial of war crimes provides the foundation for the denial of the Kosovo state, further preventing the victims from exercising their fundamental rights and functionalizing a state that would provide a forum for reconciliation. The ICTY’s legitimization of Kosovo’s independence, reaffirmed through the opinion of the International Court of Justice, has become futile against the politics of denial. The denial of Kosovo’s statehood denotes the denial of the ICTY’s justice.

State division along ethnic lines in Bosnia and Herzegovina, recently introduced for replication in Kosovo through the idea of partition or an exchange of territories among ethnic lines, stands against the ICTY’s rationale of justice. This rationale denotes that responsibility for crimes is limited to a handful of individuals, whose political ideology of ethnic division, superiority, and crime denial is easily exercised, or replicated. The “heroism” of Karadzic and other war criminals fuels today’s political denial of crimes.

While multi-ethnic states in which human rights are guaranteed and reconciliation takes place seem impossible in the Balkans, the ICTY’s individualized concept of responsibility has enabled the celebration of war crimes, and has permitted the politics of ethnic discrimination and segregation in all aspects of public life.

Today’s celebration of the victory of ICTY “justice,” at a time when the politics of ethnic division, superiority and denial of rights flourishes, therefore, is meaningless.

The politics of genocide and war crimes continues to hamper the dignified life of the victims and nurtures the animosity of future generations in the Balkans. The ICTY’s confirmation of wrongs must be acknowledged –  but the ICTY’s “justice” has just not been enough.

Raba Gjoshi has an MSc in Politics of Conflicts Rights and Justice from SOAS, University of London. Gjoshi is a clinical psychologist. She was a former director of Youth Initiative for Human Rights office in Kosovo.