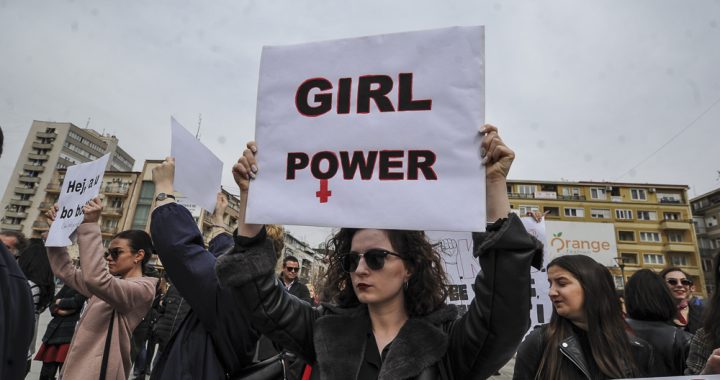 The minimalism of men’s feminism

Women of the feminist movement are their own biggest critics, and the men who have joined the ranks as protestors and activists need to brace themselves for the same scrutiny.

Critique has always been an integral part of the feminist movement. Worldwide, feminist views and actions have been thoroughly scrutinized not only by their skeptics and opponents, but by feminists themselves. Theorists, writers and activists constantly point out how the neoliberal approach to equality is damaging our attempts to support working women and protect those less privileged.

We criticize politicians and diplomats, powerful women with agency who push this approach, when they speak about ‘leaning in’ and attempt to sugarcoat the idea of corporate feminism. We call out these women when they use the rhetoric of gender equality, but nonetheless remain obedient to their political party or the institutions they work for, institutions led and dominated by men.

Fellow activists are not immune to inner criticism either, particularly when we notice hypocrisy in their beliefs or actions. “And you call yourself a feminist” is heard — we dismiss one another.

Writer and activist Roxane Gay calls herself a “bad feminist.” Refusing to deal with the pressure of being infallible, she admits that she feels a lot of pressure to, as she puts it, “pose perfectly,” to never disappoint and to always have the right answers.

“We demand perfection from feminists because we are still fighting for so much, we want so much, we need so damn much,” she said.

Not only it is expected that women worldwide own our work and prove our worth as feminists, but we encounter death and rape threats for speaking up and demanding change.

“I don’t think I can handle this for too much longer,” activist Gresa Hasa told me after she appeared on a TV debate regarding raped girls and murdered women in Albania. She had to scream out her remarks on anti-violence due to the harsh opposition she encountered from sexist panelists. One panelist blamed girls for not being educated enough to handle situations of violence, another blamed their mothers and their upbringing, whereas the man on the panel spent a good deal of time “explaining” women’s role and emphasizing their increasing disregard for significant tasks, especially the duty of reproduction and motherhood.

These experiences are never ending, and this is hard on our mental health and wellbeing. Acting on your feminist beliefs is a demanding job.

For several years now, more Kosovar men seem to embrace the idea of being a feminist. They proudly express themselves as such on social media, they attend feminist marches and protests, they write and speak loudly on gender equality debates and conferences.

And whenever men proclaim themselves ‘feminists,’ or simply claim to believe or stand for women’s rights and gender equality, we rarely question them. We welcome them with open arms and we applaud them. We say we need them, that gender inequality is not a woman’s fight only, and that equality benefits us all.

Feminist marches and protests seem to serve as an occasion where self-proclaimed feminist men promote themselves. They march and even shout feminist slogans and call against violations of women’ human rights. But when you think about how sexually entitled a man raised in a patriarchal society can be, it takes a serious amount of effort and will to unlearn and let go of that privilege.

Thus, it comes as no surprise when men who have stalked us, harassed us, and done us harm as women, are present in such events.

Several activists have expressed irritation in this regard, either on social media or in closed groups. It is necessary that we ask: “If a man cannot understand ‘no means no’, if he is unable to accept that he has no say in regards to a woman’s body whatsoever, if he cannot condemn a discriminatory practice when it happens in the family, at work, in a social circle or even worse, if he’s the one perpetrating it, what exactly is he doing in a feminist protest?”

Parenthood is another issue that highlights the double standards within feminist groups and advocates in Kosovo concerning gender. NGOs in Kosovo have, in the last five years, worked with the concept of fatherhood, and are trying to promote it as a means for equality among men and women. ‘Dad of the year’ is an annual award to fathers for their contribution on parenthood.

Mothers, on the other hand, are taken for granted. Pregnancy, along with its discomforts and possible complications, terrifying labor, birth (still a common cause of maternal death worldwide), baby blues and postpartum depression (utterly ignored by Kosovo society), sleep deprivation and serious exhaustion, all accompanied by societal expectations to keep smiling and lose weight, are perceived as nothing but ‘natural.’

No woman is rewarded for going through these hardships, for being the primary caregiver 24/7 (whether they’re single mothers or not), for being away from work until a proper solution is found for looking after the little one, or for contributing to the child’s upbringing.

But, if a father changes his own child’s diaper, an act as basic for a parent as the air we breathe and one of the easiest tasks in early parenthood, he gets an award and public social praise. He is not promoted as simply a good dad, but “the best dad.”

Women’s NGOs in Kosovo stand ready to share whatever platform they have with men, especially men in politics. We saw Prime Minister Ramush Haradinaj wearing a pink scarf in the annual march for breast awareness month. No one asked accountability from the person in charge of state institutions that must ensure women’s health. Instead, he is welcomed to hold a speech and march peacefully surrounded by balloons, dancing and music.

Male politicians are also invited to write on equality and women’s rights. “They’re our mothers, daughters, sister, wives” is among their favorite expressions when they speak and write on the necessity of gender equality.

But do we really need to read of piece of superficial text from men who actually have the power to help make gender equality a tangible reality? Members of parliament, ministers and other state officials, if willing, can easily adopt and implement laws that benefit women.

Take the Law on Family, for example. Since parental duties are perceived as synonymous with a mother’s responsibility in Kosovo’s society, they could propose that the law includes explicit provisions on the responsibilities of fathers.

By focusing legal attention on men’s concrete responsibilities in family life, we will see concrete results in higher levels of employment among women. According to the Kosovo Agency of Statistics, currently only two in ten women are active in the workforce.

Men can contribute to women’s equality if they simply stop hurting girls and women. The ugliest example that comes to mind is the case of the teenage girl from Drenas, who in February was thrown into the spotlight after reports of rape were made against her school teacher, and blackmail and rape charges against the police sergeant in charge of her case.

The lawyer spoke publicly on the girl’s behalf, fiercely defending her against the men who took advantage of her sexually and emotionally.

A group of students and activists from Drenas organized a protest asking for the men who abused the girl to be held accountable by law. The organizing council of the protest was quick to announce the lawyer a ‘hero’ for protecting the girl.

Weeks later, it was reported that the lawyer is currently being detained by police because of messages he exchanged with the girl, which according the the prosecution are evidence that he too took advantage of her, just like the other men he was claiming to protect her from.

For the time being, we must admit that Kosovo men are not our allies. They don’t have what it takes to be feminists and to live by feminist values. They have neither the legacy from their fathers and grandfathers, nor the proper upbringing. Currently, their support is phony and does nothing to make this country a safer and better place for girls and women. Their ‘contribution’ is not protecting us from violence; it isn’t improving our health or our opportunities for professional growth.

Even the most genuine exceptions won’t make much of a difference. Nobody deserves a prize for being a normal and responsible human being.

In her piece on Kosovo’s abusive men, Hana Marku says that when such men along with their friends abuse and assault girls and women, they know exactly what they’re doing. I would say that the same applies to the self-proclaimed feminist men who contribute minimally to women’s rights; they know they can do better but they choose to enjoy the status quo.

Therefore, instead of praising men for their minimal efforts and congratulating them prematurely, I say we wait long enough for them to prove how genuine their feminist beliefs are. It isn’t our job to educate and illuminate them either.

On the contrary, our job is to challenge them and assign them feminist tasks. We must make it clear that the epithet they have grown so fond of comes with great responsibility. I say we keep them accountable and demand that their feminism be a practical one.