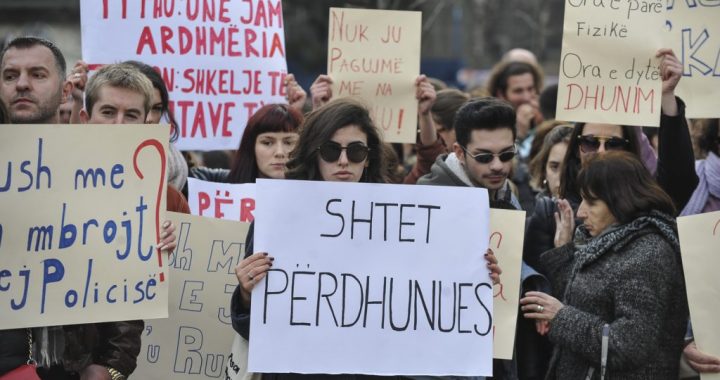 Signs held at Wednesday's protest concerning rape allegations against employees of public institutions state (L to R) "Who should protect us from the police?" "We don't pay you to rape us" "Rapist State" "First hour at school: physics - Second hour: Rape." | Photo: Atdhe Mulla.

A stench that won’t subside

Hana Marku responds to the allegations of rape and abuse of power involving public institutions that have gripped Kosovo over the last week, addressing deep-rooted notions of women and girls’ agency and the ‘gift of silence’ given to perpetrators.

I used to think men in Kosovo fail to understand how much violence is inflicted upon our women and girls. I imagined men as ignorant to the scale of suffering their fellow men inflict. If only feminists could collect enough data, publish enough reports, organize enough protests. To me, it is now obvious that Kosovo men know exactly what they are doing. They know precisely how often and to what extent our women and girls are brutalized – they are the primary perpetrators, after all.

The Kosovo man knows what he is doing when he tracks a woman down in the street, when he is hitting her, when he is raping her and when he is shooting or stabbing her to death. And he knows what his friends are doing too. I have to think, he and they must enjoy it. The adult men who raped that child in Drenas knew what they were doing and enjoyed it. Their friends must have known it too.

Kosovo’s hatred for its women and girls is like a dead body in a locked room. You can smell its stench everywhere. We cannot hide it, even when we pretend, collectively, like it’s not there. Survivors of wartime rape like Vasfije Krasniqi Goodman, who spoke publicly about her experience for the first time in October last year, are a testament to our inability to punish rape, even in the most extreme and egregious of cases. The many other survivors in this country who remain silent are no longer fleeing soldiers – they fear their own men. They have good reason to. Survivors in Kosovo have been kicked out of their homes by their husbands after telling the truth.

There is, of course, an additional dimension to the situation in Drenas. When adult men target a 16-year-old girl, it is likely that they think they can rely on her keeping silent or not being believed. They may be forgiven for thinking that no one cares about girls in Kosovo. As recently as 2014, 14 police officers in Suhareka were investigated for their involvement in the kidnapping and sexual assault of two teenage girls in a hotel – both girls spoke out, but one of them recanted her story. Her change of heart was of course, understandable. For a teenage girl in Kosovo to speak of being raped by a grown man is to be a whore.

Indeed, all too often the bodies of girls are considered fair game to any man who wants them. Many Kosovo adults believe that when a girl’s body reaches puberty, she is sexually available. Even in circumstances that make consent impossible, many Kosovo adults think it is plausible that an adult man can have an adult relationship with a child. Many Kosovo adults are ready to give their compassion to adult men who groom a child, rape a child and treat a child like a sack of flesh. His family, his career, his name deserve our empathy.

The police officer, whose name we now all know, initially maintained his innocence on every single charge. The teacher, whose name we know, is convinced he never raped a teenage girl. Categorical denial has worked for many men in our country, but I don’t think it will be quite so easy this time. We know their story and we know hers, and this time – maybe finally – enough of us will choose to believe hers. Not only do we believe her, we want them to be known. We circulate their names and faces, because experience has taught us that the law and ‘innocent before proven guilty’ does not work for women. Women are often dead by the time a man is proven guilty. Sharing their names and faces is an act of final desperation, a demonstration of our total lack of faith in the ability of sexist police and sexist judges to offer this girl justice. Regardless of what our broken legal system concludes, may they lose the one thing that men in this country seem to hold dear – their good names.

Beyond the rage of the moment, I also ask that we consider how this anger will change our day to day behaviour. When the protests die down, will we confront the abusers in our own lives or will we continue giving them the gift of silence? How will this anger change our feelings towards the men who we know hurt women and girls, be it with their words or with their actions? I was complicit every time I looked away and said nothing, because it wasn’t happening to me or because it was too uncomfortable to say something. It takes conscious effort to undo the ingrained instinct to be polite and look away, even when faced with outright disrespect.

When the Kosovo Assembly Parliamentary Women’s Caucus said on Wednesday “each one of us needs to find the courage to unroot these types of characters,” does that mean they will at least attempt to unroot their male colleagues who have actively harmed, debased and exploited women and girls? I certainly hope so, and I hope they have male allies in parliament to act in alliance with them. This work must be done by us all, men and women. Men stand to regain their humanity and women stand to gain liberation.

To the girl who refused to be quiet: I love you. I support you. I believe you.