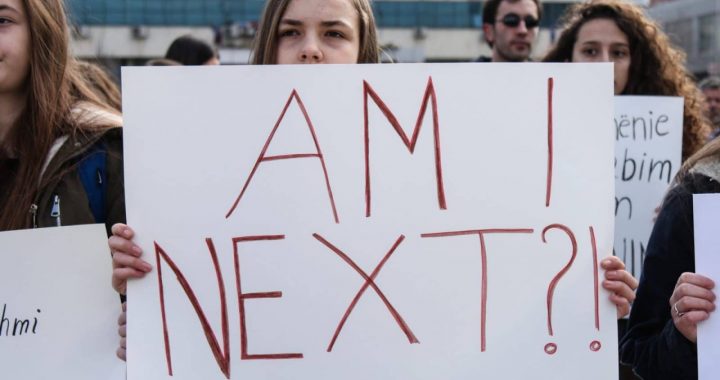 A protest against sexual violence towards women in Ferizaj on Monday. | Photo: Bardha Goga.

Coverage of the alleged sexual abuse of a teenager in Kosovo is prompting more victims to come forward.

Kosovo Police reports and activists’ campaigns are highlighting a growing number of sexual violence cases in Kosovo, following a recent case in which a teenage girl was allegedly abused by a teacher and police officer.

One alarming case she shared with BIRN concerned a young girl who committed suicide after her uncle raped her several times.

The case was apparently not reported to the Kosovo Police because her family “did not want the world to know about it.”

On Monday, in Ferizaj, women and activists staged a protest over the Drenas case, which has shaken the country. The first protest took place in Prishtina last week.

Some of the banners read: “Don’t be scared to raise your voice,” and: “Get our trust back,” referring to allegations of police inaction in this and other cases.

The policeman in the Drenas case, known as V.V., is accused of sexually abusing the teen after she tried to report being sexually abused by her teacher.

Police have since arrested the teacher and the police officer, and  a 30-day detention warrant has been issued for both of them.

A perception of inaction or complicity in such crimes by both police and courts in Kosovo remains strong.

While Kosovo police noted 58 new cases of alleged sexual abuse of persons under 16 in Kosovo throughout 2018, prosecutors initiated only 25 cases in relation to sexual abuse in 2018. That was less than half the number of cases recorded by the police.

As for sexual harassment, while 43 cases were reported to the police, only eight cases made it to court during 2018.

Adelina Berisha, from the Kosovo Women’s Network, told BIRN that such harassment in Kosovo remains routine.

“62 per cent of women in Kosovo have experienced sexual harassment,” she said, citing a study that the network has conducted.

The number of cases now reaching the public is growing.

As BIRN reported, after a girl from Fushe Kosove told police that on February 3 that a man had sexually harassed her, the police interrogated all parties, and decided to continue the investigation under standard procedure, in which the defendant is released and remains free for the duration of the inquiry.

In Gjakova, an indictment from September 2018 says a defendant, named B.V., while working as a teacher in the Mazllum Kepuska elementary school, sexually harassed 27 pupils, using seductive words and touching them inappropriately.

Another report from January 27 concerned a 26-year-old man in Gjilan, who used Facebook to intimidate a 14-year-old girl into meeting him and having sexual relations – threatening otherwise to publish intimate photos of her.