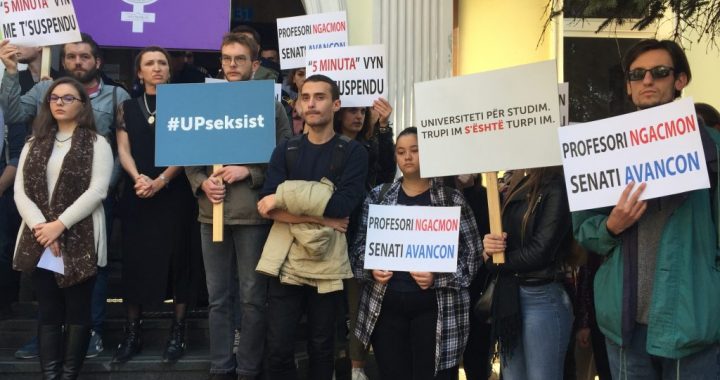 Protest against sexual harassment and sexism at the University of Prishtina in front of the rectorate building. Signs read "University is for studying. My body is not shameful," "The professor harasses, the Senate promotes." | Photo: Kallxo.com

Sexual harassment and assault allegations are stacking up for faculty members at UP. We need watchdogs to end impunity for harassers and make the university safe for its students.

Milaim Sejdini is an associate professor at the Faculty of Medicine at the University of Prishtina, UP. He is also an alleged sexual harasser. One of his female students, a candidate for specialization in stomatology, accused him of sexual harassment in July, claiming he invited her to join him in his room saying “It will only last 5 minutes.”

After a protest organized by students and activists demanding a halt to his promotion and his suspension, the Senate of the University decided Sejdini would not advance to a regular professor position because of the sexual harassment case, which is currently being handled by law enforcement authorities, with the senate also citing his unethical background of fraud and plagiarism as justification.

He is not the only professor currently under investigation by the prosecution for perverted behavior and official misconduct. Rexhep Osmani, former Minister of Education and professor at the Faculty of Education was suspended by the university when a student accused him of sexual harassment. He denied having touched her, but said to have only ‘hugged her.’

According to an analysis conducted in 2018 by Kosovo Women’s Network, KWN, the lack of definition of sexual harassment in Kosovo’s criminal code remains an obstacle to combatting the crime.

“Between 2015 and 2017, 416 harassment cases were reported to police, and 71 per cent of victims were women. During the same period, police documented other crimes involving gender-based violence, including five cases of degradation of sexual integrity and 97 cases of rape. Nearly all victims were women,” the report highlights.

Another obstacle, according to KWN’s report, is that the phenomena of sexual harassment remains underreported. “Evidence suggests that more sexual violence cases likely occurred, but either victims have not reported them or police have not recorded cases. The fact that speaking about sexual violence may contribute to public shaming likely precludes victims from reporting it.”

Bashkim Zahiti, dean of the Faculty of Law in Prizren, was suspended after two students accused him of having conditioned their grade in exchange for sex. Prosecution in Prishtina has said it possesses phone recordings of Zahiti’s scandalous demands towards his students. The initiation of his trial was postponed in May 2017 due to his claimed ‘poor health condition.’

An anonymous video recording was published years ago, where a student with her back against the camera spoke on behalf of her friend and roommate, providing accounts of the abuse her friend had suffered at the hands of Hasani.

Vulgar, explicit language is used, screaming and commanding the student that she continues to see him or arrange for her friends to do so, if she ever wants to finish her education. He is not an ordinary professor who demands sex in exchange for a grade, “He’s a rapist,” the student said.

While it was reported that Hasani claimed these accusations were fabricated by his political opponents, the truth of the matter lies in the fact that he himself is a powerful man with close ties in politics, and a quick reminder of Kosovo’s level of corruption and poor rule of law is sufficient to realize that men like Hasani are ‘granted immunity’ and can get away with the foulest behavior.

When professors sexually harass and abuse their students, and manage to get away with it because of their power and status, not only it is made clear that sexual harassment is tolerable, but it also normalizes stalking and verbal abuse on campus which is very common and often not even recognized as ‘harassment.’

In July this year, student Aulone Memeti had to expose her harasser online. He stalked her online and followed her around campus for two months, unable to accept her rejection. When professors are left free to harass, other men at university feel just as free to act on the harmful belief that women owe them sex.

And in societies like ours where women are reduced to sex objects, blaming and exposing the victim is emblematic of the issue of sexual harassment.

“This is the student who was sexually harassed by her professor,” the online media reported in March when a former student spoke openly of being harassed by her art professor in his office. Many men and women on social media chose to ignore her story and come up with predictable excuses to belittle her statement, be it her make-up or her outfit, or even the way she spoke.

Former vice-rector Teuta Pustina–Krasniqi, during an interview for a local television, had a message for the women at the university. Attempting to sound politically correct and condemning sexual harassment, she nonetheless couldn’t help but embody the very average conventional woman unwilling to shake the status quo. She urged women not to provoke others with their clothing since, as she put, “it has a psychological effect and can negatively impact the environment where students have lectures.”

After students and activists demanded she be fired due to her use of ‘sexist language,’ the Governing Council at the university (which along with Senate and the Rectorate constitute the main governing units within UP), dismissed her, emphasizing that “the Council remains deeply dedicated to fighting all negative phenomena at the University of Prishtina by respecting the law and human rights.”

Isn’t it ironic, though, how fast and effective the measures are taken when a woman is at fault. Her case was handled in typical patriarchal fashion. Inequality is fought at the very surface, you ‘burn the witch’ for a minor fault and ignore the root of the problem: the powerful men who sexually harass and abuse within one of the most important public institutions.

The question remains, how do we fight these repulsive men who harass, threaten, and destroy students’ lives?

While naming them is one powerful step, encouraging students to speak truth to power, it is not enough. Acknowledging an existing culture that blames its victims, it is a must to recognize the fact that these men are not just sexual harassers. There are lawsuits against them for fraud, plagiarism, and corruption. Professors like Sejdini, Osmani, Zahiti, Hasani and others have a network of other powerful men who protect their jobs and their reputation.

That is why becoming watchdogs through organized activities tracking their proceedings is a critical approach to keeping these men accountable and preventing them from exercising any abuse of power. Monitoring their cases, attending their hearings, protesting their return to the university are a must if we want the University of Prishtina to be a safe space where students are protected and supported by law.

Feminist rage, no matter how underrated, is just as crucial in keeping the fight going. “We believe the women” is the mantra that is encouraging women worldwide to share their stories of abuse and demand their abusers to be held accountable. The argument of ‘provocative outfits’ is harmful and outdated, and we must let it go once and for all.

Naming professors as abusers and witnessing their ‘fall from grace’ by going after them through the law is an important aspect of redefining the core values of the University of Prishtina. It is a significant aspect of fighting the corruptive behavior within UP, ripping abusive power to shreds and fighting against a rape culture that silences and demeans students.