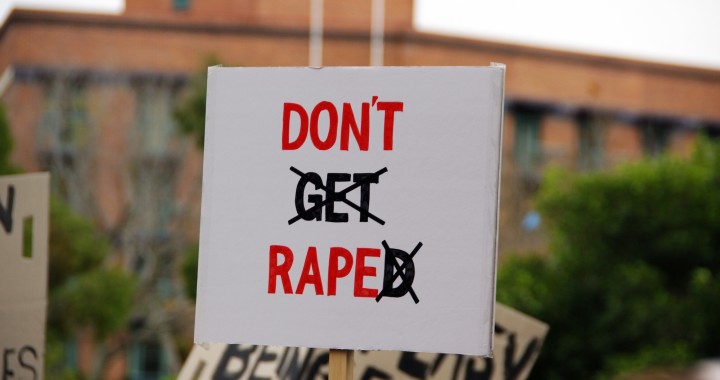 To explain a set of beliefs and an environment in which countless forms of sexual harassment against girls and women are legitimised, where victims are blamed while the justice system remains silent and passive towards perpetrators, in the USA in the 1970s, feminist activists invented the concept of “rape culture.” Rape culture manifests in various forms. It tolerates sexual violence, justifying it on the grounds of what the victim was wearing, when and where it happened, it demands that women ‘not get raped’ rather than focusing on rape as a criminal offence, or on rapists as violators and the justice system that keeps on failing us in this respect. Thus, when it comes to rape culture, social perception and response to rape and sexual harassment is key.

In Kosovo, rape culture is plain culture. It is legitimate since gender relations, roles and values in various fields and institutions keep on reinforcing the belief that manhood should be proven through dominance and aggression towards women (and other men), whereas women must prove their validity by being submissive, silent and passive. Rape culture is fostered in various ways: through rape jokes, sexual comments on physical appearance, any gesture or act that is not accompanied by enthusiastic consent from the woman, justifying rape or selective justification of rape in terms of war or other circumstances.

The sisters from Mitrovica, one raped and both beaten systematically by former Kosovo Liberation Army (KLA) personnel during 1998 on the charges pressed by EULEX, lost the trial. They were abused in a KLA headquarters for “having collaborated with Serbs.” Raped for patriotic motives. When the case was publicly debated, the sisters were deemed ‘whores and traitors’ for attacking the ‘sanctity’ of the KLA’s personalities; the patriotic “Sultans” will be forgiven. The idea of not recognizing that rape is rape, despite the ethnicity of the rapists and whether the women raped were Albanian, Serbian or Roma, is an indicator of rape culture.

Rape culture at the educational level

A professor of International Law and International Relations at the Faculty of Law and the Faculty of Political Sciences, former-dean of the Faculty of Law at the UP, former-rector of the UP, and former-head of the Constitutional Court, Enver Hasani, has been accused by his female students of demanding sexual favours in return for favourable grades. Beyond the veracity of the accusations of against the professor in question, it is the reactions of both women and men, fellow male and female students who seek to punish the victims, which are stunning. Their own fellow students accuse them of being dishonest, that they would do anything for a grade, or lack the courage to confront him (as well as others) publicly. This finger-pointing at those who are intimidated rather the one who is doing the intimidating is a sign of rape culture.

Similar sexual harassment complaints have been made public elsewhere in the media already. Bashkim Zahiri, a professor at the University of Prizren, was temporarily suspended last year for harassment accusations. In the past there were several complaints against the professor in question, as the dean confirmed. As the above video media reporting shows, students who are sexually harassed hesitate to speak out and report cases officially and openly. Such an attitude is a result of a culture of blame and shame for the ones being harassed instead of going after the harasser.

University literature legitimises rape. The textbook Kriminalistika by Professor Vesel Latifi, a book that guides new generations of lawyers, attorneys and judges, is an example. In the book, Latifi claims that victims of sexual assaults are the women easily deceived, careless, vain and faithless. Despite constant data that proves rape is an issue of power and control, an act of intimidation and subordination, and that it is caused by rapists and not just any man, the literature of UP remains dangerously archaic, as do the professors’ and students’ points of view.

A few weeks ago, it was reported that the LDK MP, Bekim Muja was arrested for sexually harassing a 13-year-old girl. Last year, Ramadan Sejdiu, an official from the Ministry of Economic Development, was arrested in Japan for sexual harassment. Sexual harassment and assault are common in schools as well. Such is the case in the “Frank Bardhi” Gymnasium in Mitrovica, in the primary school in Suhareka municipality, or the case in Malishevë. All of these cases show that teachers see their students as sex objects, and do not hesitate to violate their own dignity as teachers, nor the ethics or the law. The fact that such cases are both numerous and not considered criminal acts are indicators of rape culture.

Hip-hop and pop culture legitimise rape as well and reinforce this culture that regards sexual exploitation and subordination of women as male privilege. The well-known and quite admired Kosovo band Offchestra in their song “May I?” (Alb: “A bon?”) ask: “May I give it back tomorrow and you give it to me tonight, It would be better if I didn’t beg you, it would be great if I didn’t ask you at all.” Lack of consideration for female consent reveals the patriarchal tendency for men’s entitlement to women’s bodies. Explicit misogyny is way more common when you consider the song “Whore” by rapper Getinjo, or “The slut such as yourself” by rapper Cyanide that determines that the woman he is referring to in the song does not deserve love, a home, nor the right to breathe.

Once we make room for and find arguments to justify rape, attempted rape, threats of rape or any form of sexual violence, we will easily find ourselves as part of this culture that blames the victims, trivializes rape as a criminal act, or justifies the circumstances. Whether it is the boyfriend, fiancée or the husband, the MP or the school teacher, the university professor or the dean, the soldier or the commander-in-chief, or any other person accused of rape, they must be charged with the same punishment. No privilege for any of the privileged. Rape, harassment, threats, physical, psychological or verbal abuse, are all human rights violations, and the women (and men) affected are protected under national and international human rights laws and conventions.

In order to avoid rape culture from being normalized and actualized in institutions and society, we must expose and report it. Most importantly, we should provide protection for the ones hesitating to do so themselves, for the ones judged and punished by society more than the perpetrators. Women and girls of all ethnicities, ages, or sexualities, women we know and the ones we do not, women assaulted or threatened with rape, are psychologically violated and lynched in public when they ask for justice by sharing their stories. Once we give voice and power to the victims, once we consider rape a crime regardless of circumstances, once we cease to justify the men who rape, and once we strengthen the awareness of institutions in addressing rape as a criminal offence, rape culture will be silenced along with men’s entitlement to women’s bodies.