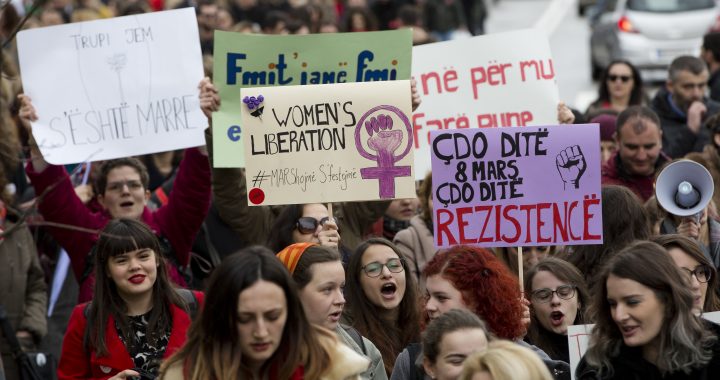 Protests will take place on Thursday in Prishtina and Friday in Drenas demanding immediate steps to bring justice and increase awareness on issues of sexual violence in the Kosovo Police.

In response to allegations of rape of a minor made against an employee of the Kosovo Police on Tuesday, protests organized in Prishtina and Drenas on Thursday and Friday will take place.

The organizers of the protest demand that the Police Inspectorate of Kosovo start investigations into the case and educate the police force to deal adequately with instances involving sexual violence.

The officer, a Police Sergeant based in Drenas identified only through the initials V.V., was arrested by police on Tuesday night and is to be detained for 48 hours by order of the prosecution, according to the Police Inspectorate of Kosovo.

The Police Inspectorate stated that investigations into the incident and into other individuals suspected of involvement are ongoing.

According to the Youth Initiative for Human Rights in Kosovo, the first protest to take place in front of the Police Station in Pristina on Thursday was organized to “protest against the legitimized violence within the Kosovo Police against women and girls.”

“The latest case, where it is suspected that a police investigator has raped, persecuted, threatened and abused a minor from Drenas, shocked us all, and this requires a far-reaching response,” the statement on the protest’s Facebook event reads. “We should not be silent in such cases, and let others develop in silence.”

A second protest was organized by a group of civil society organizations in Drenas, with a march to take place beginning at the ‘Gjergj Kastrioti Skenderbeu’ High School in Drenas on Friday.

In September 2017, a teacher of the minor involved in the case was suspended on accusations of sexual harassment. However, the investigation was dropped by the prosecution after the minor withdrew her accusations under unknown circumstances.

On Wednesday, in response to Tuesday’s arrest, the mayor of Drenas Ramiz Lladrovci announced in an press conference that he re-suspended the same teacher in order to reopen the original investigation.

“We have once again taken measures and we have written to the state prosecution that even then we considered it a serious case, and believed that it was not treated properly, and now it seems we were right,” said Lladrovci.

The civil society organizations in Drenas have set out a number of demands to the Police Inspectorate of Kosovo.

“The case of the misuse and mistreatment of a 16-year-old girl by those that are supposed to educate, protect and heal her is clear evidence of a systematic halt in the process of statebuilding in Kosovo,” the event reads.

“On our initiative, we demand that the Police Inspectorate initiate investigations into the entire police station in Drenas concerning these cases, and depending on the findings, to take measures,” they said, and “to organize trainings to raise awareness of the police staff on gender equality, the treatment of these kinds of cases and the code of ethics at work.”

The organizations also demanded that the Inspectorate organize awareness campaigns to increase citizens’ trust in the Kosovo police, cooperate closely with the civil society and youth organizations.