Following a trail of fresh evidence from wartime sexual violence survivors in Kosovo, researchers connect the dots and reveal the true pattern of sexual violence as a weapon of war and ethnic cleansing across the country.

The first time the crime of wartime sexual violence was given the label of “tool of war” was during the conflict in Bosnia and Herzegovina. Though targeting all ethnic groups, Serbian security forces used sexual violence systematically against Bosnian women as part of their strategy of ethnic cleansing.

Nearly 20 years after the Kosovo war of 1998-1999, survivors come forward and identify the date, the place and the circumstances surrounding instances of sexual assault. We can prove that sexual violence was used as a tool of war in Kosovo as well. It was never just a practice, a “bad thing” tolerated by commanders as the war raged on.

At the International Criminal Tribunal for Yugoslavia in The Hague, ICTY, sexual violence in Bosnia and Herzegovina featured prominently in the conviction of senior military figures. The trials of Serbian military and security leaders indicted for war crimes and crimes against humanity in Kosovo had different outcomes in regard to the count of sexual assault: General Nebojsa Pavkovic was convicted in the first instance, but Nikola Sainovic, Sreten Lukic, and Vlastimir Djordjevic were found not guilty, because only a handful of witnesses had testified. 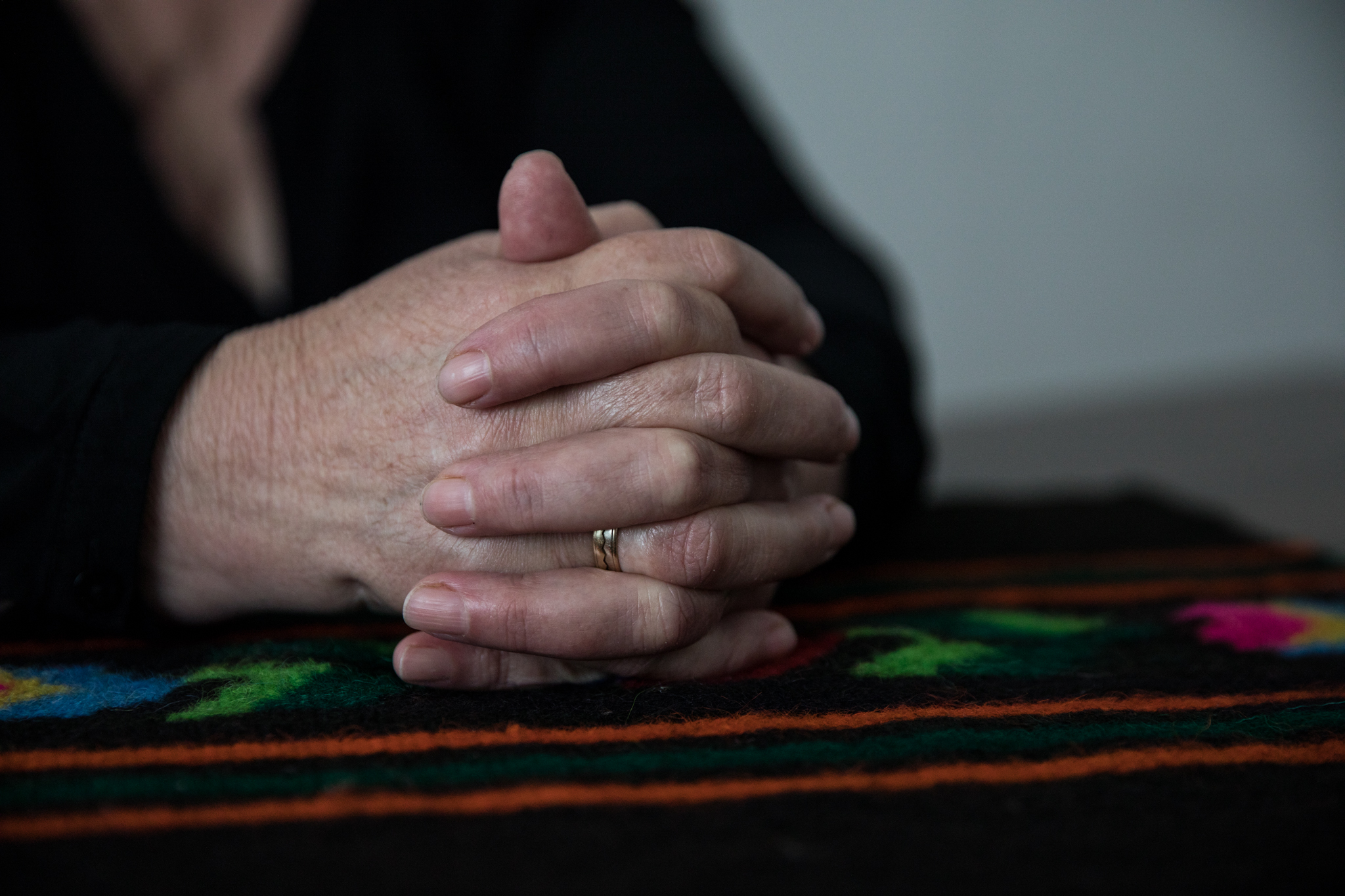 Only on appeal, in 2014, were all of them convicted on charges of wartime sexual violence. The Court ruled, reversing its previous trial judgements, that these leaders knew, but did nothing to stop, the widespread sexual violence that was occurring at the same time as destruction of property, mass expulsions and mass killing of Albanian civilians. In that context, sexual violence amounted to persecution of a group and a crime against humanity.

We can now add new and more damning evidence to the Court’s conclusion.

Data collected from 280 survivors of wartime sexual violence perpetrated by the Serbian Army, the police, and the unofficial groups of perpetrators they commanded, prove that there was a pattern, a logic and an intent to the use of sexual assault as a weapon deployed systematically and strategically along with mass murder, the burning and the pillaging of property, targeting Albanian civilians.

This evidence completely disproves the Serbian leaders’ line of defense: that they did not know their forces were raping Albanian women, that rape was never a strategy, and that if it happened, it was just a sporadic, opportunistic act.

The cases we analyzed are just a small number in comparison with the total count of survivors, but together with the complete data on civilian casualties compiled by the Kosovo Humanitarian Law Center, there is a large enough sample to map the strategy of terror and destruction planned by the Milosevic regime. 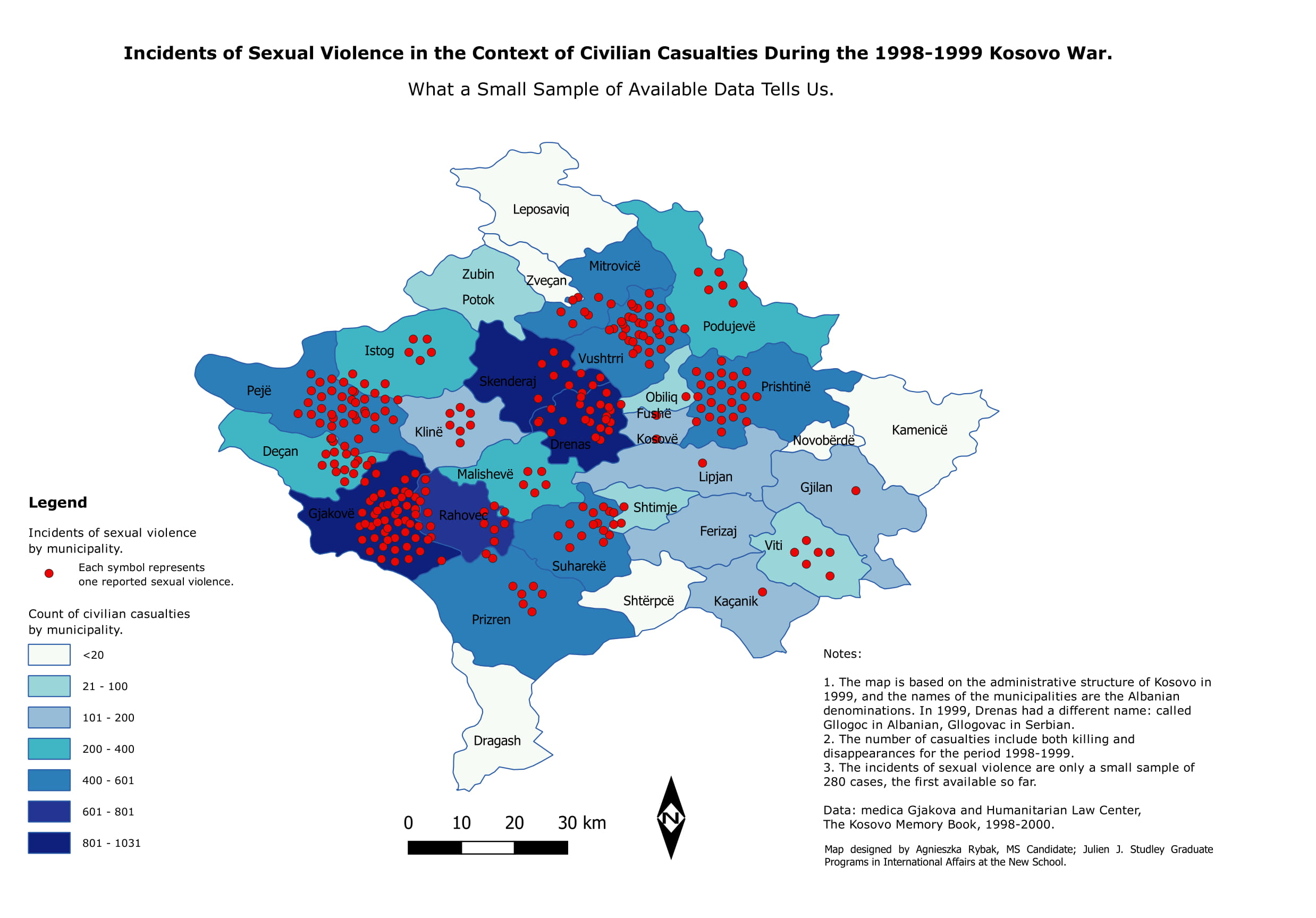 The map shows without any ambiguity that killing, disappearances and sexual violence in Kosovo during 1998 and 1999 were overlapping throughout  the war against Albanian civilians. It confirms what OSCE and Human Rights Watch investigators had concluded as early as 1999: sexual violence was “a weapon of ethnic cleansing” in Kosovo, like in Bosnia.

We looked at the data and asked the question: what was happening in those places at the same time that sexual violence was happening?  Looking into the stories of just a fraction of the survivors interviewed, we can affirm what the court was only ever able to imply.

The timeline: mapping sexual violence in the Kosovo war

We noticed a sizable number of incidents from Beleg and Carrabreg, just south of Decan, between March 25 and March 28, 1999. That is exactly when Serbian troops clamped down first on Upper and Lower Carrabreg, then on Beleg.

All the people, villagers coming from a larger surrounding area who had not found refuge in the mountains, were told they had five minutes to leave their homes; everyone was robbed of cash and everything of value they possessed; all the houses were burned; men were stripped naked, publicly humiliated and randomly shot; and several women, displaced from the larger surrounding area, were put in a barn and raped by multiple perpetrators.

Finally, they were all loaded on tractors and driven to the Albanian border. The final tally of civilian casualties is 38, and we now know that there are many more survivors of sexual violence than the two witnesses who summoned the courage to testify in The Hague: we counted a total of 15 in our sample alone.

A cluster of rapes happened in the larger area surrounding Shtutice and Verbec ,Drenas, on April 28 and 29, 1999. Then on the night of April 29, NATO bombed the Feronikel factory, a legitimate and legal military target, since it had been used as a base and a detention facility where torture was practiced. The bombing elicited an even more brutal attack on Albanian civilians, and more rapes.  Early on April 30 Serbian troops seized Shtutice and Verbec and killed respectively 44 and 80 civilians. All the houses were burned, and many more civilians were taken prisoners and held overnight at the mosque in Cirez.

The next day, during the transport to prison, 102 were taken off the trucks and executed at the Shavarina mines in Citakove e Vjeter. Before and after the killing, many women were tortured: we know of 17 of them.

Incidents cluster in significant numbers in Studime, the prison of Smrekonice, and Vushtrri, around May 2, 1999. On that day, columns of displaced people pushed by Serbian forces out of their homes in the surrounding area and converging on Studime, to the east of Vushtrri, were harassed and robbed by police and army despite the display of a white flag.

The women were separated from the men and a number of them were held in a school, many were raped, 22 in our sample, as the men were being killed, 106 of them in one day.

The rest of the displaced, taken to the prison of Smerkovice, endured from two to three weeks of illegal detention during which they were tortured, denied food, and held in inhumanely cramped quarters. 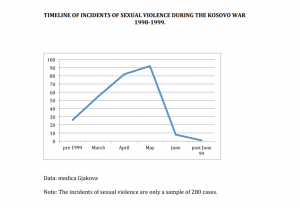 On May 22 they began to be released daily in groups and were marched to the border with Albania. Some were pulled out of the convoy and publicly sexually assaulted at the Ramiz Sadiku cemetery, as two survivors testified. From June 22 through June 8, about 3,000 men who had been detained at Smerkovice crossed the border into Kukes. Many had their hands broken from the beating and knew nothing of their wives and mothers from whom they had been separated in Studime.

Fighting had stopped there by end of March, and displaced people had gathered there, but Serbian troops returned on April 21, 1999, killing a dozen of men and raping several women. We counted 8 in our sample.

We looked at the data and heard the stories of survivor. They are all very clear about what happened. Victims were of all ages: at the two extremes, a nine-year-old and a seventy-year-old.

The majority of these survivors were not only raped, but also scarred with cigarette burns and knife cuts. They were the victims of multiple aggressors, cursed and insulted for their ethnic origin. They were left traumatized, as the living embodiment of the attempt to destroy an entire people. Their entire experience is a textbook definition of rape as a weapon in a strategy of ethnic cleansing.

Anna Di Lellio is a Professor of International Relations at New York University and The New School, NY.

Garentina Kraja is an independent researcher working from Kosovo.

Mirlinda Sada is the executive director of NGO Medica Gjakova.

Customs tariffs for Serbia and Bosnia increased to 100 per cent