Whether protest or party, pride marches on

As Kosovo’s LGBTQ+ community prepares to celebrate its second Pride parade on Wednesday, organizer of the parade, Blert Morina, describes balancing the scales between activism and celebration.

Last year, it was under the banner ‘In the name of love’ that Kosovo’s first LGBTQ+ pride parade made its way down the main boulevard in Prishtina. It was the first time that joy, music, rainbow flags and dancing accompanied marchers demanding respect and dignity for the LGBTQ+ community.

However, ‘In the name of freedom,’ this year’s accompanying slogan, may ring slightly different in your ears. Blert Morina from the Center for Equality and Liberty of the LGBT Community in Kosovo, CEL, explained that ‘In the name of freedom’ looks not just for respect, but asks that people reflect on their personal prejudices.

“It’s not just directed towards society or institutions, but towards ourselves,” said Morina. “I am open to my family and I’m really well supported, but there will always be people there to make you feel bad. Until we reach a level where sexual orientation or gender identity will be taken for granted, and it won’t need to be discussed, then it will be a real celebration.”

Morina is the director of CEL, one of only two NGOs in Kosovo working to promote and progress LGBTQ+ rights. He explained that despite the success of last year’s Pride, the LGBTQ+ community is a long way from achieving equality in schools, in the courtroom, in parliament, in the home, or even anywhere outside the capital city. 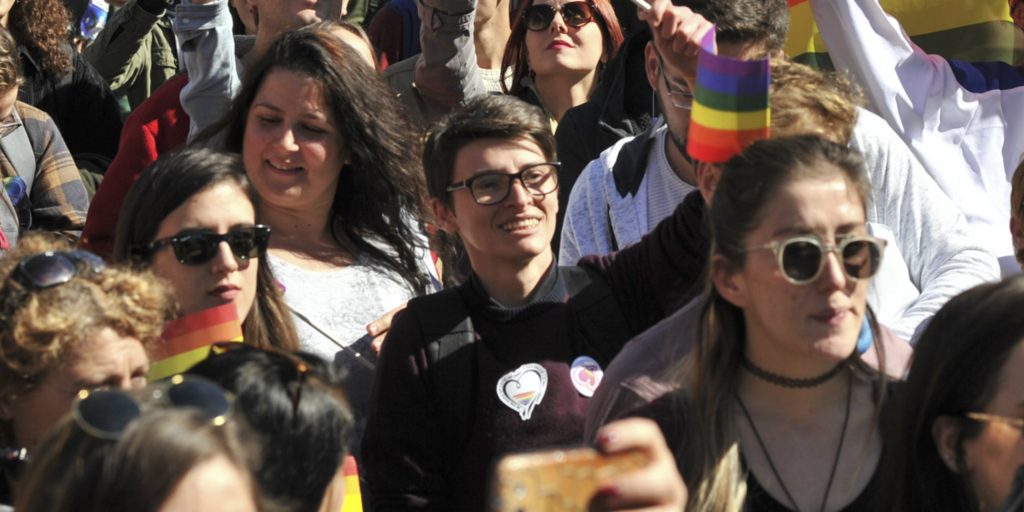 Whether pride has been celebrated in a country for two years or 20, LGBTQ+ parades represent a positive and inclusive blend of activism, protest and celebration. The ability to wave the rainbow flag is a nod to the progress achieved, while also creating a platform for individuals to demand safe spaces for self-expression and identity.

Morina believes that there is an imbalance in the way that organizations and civil society view LGBTQ+ rights in Kosovo, however, which can contribute to the isolation of the movement. The Pride parade is an opportunity to target these institutions and offer them a platform too to express their solidarity.

“This is a good moment to sit with our institutions, our activists and our civil society. Every time we fight for our human rights as the LGBTI community, these are seen as somewhat separate from the rest of human rights,” he said. “But we need to all be at the same table, you can’t prioritize human rights, it doesn’t matter who they’re for.”

Pride in Kosovo aims to draw attention to a number of intersecting issues that the LGBTQ+ community face, said Morina. Throughout the last year, CEL has been campaigning for name and gender change rights for transgender people, against domestic violence against the LGBTQ+ community and has been trying to educate young people in communities across Kosovo about equality and human rights.

Now is the time these subjects should be brought together and addressed, according to Morina.

“We’re going to have a lot of discussion and attention from media institutions and civil society surrounding us this week, so this is a good time to raise all of these issues,” he said. 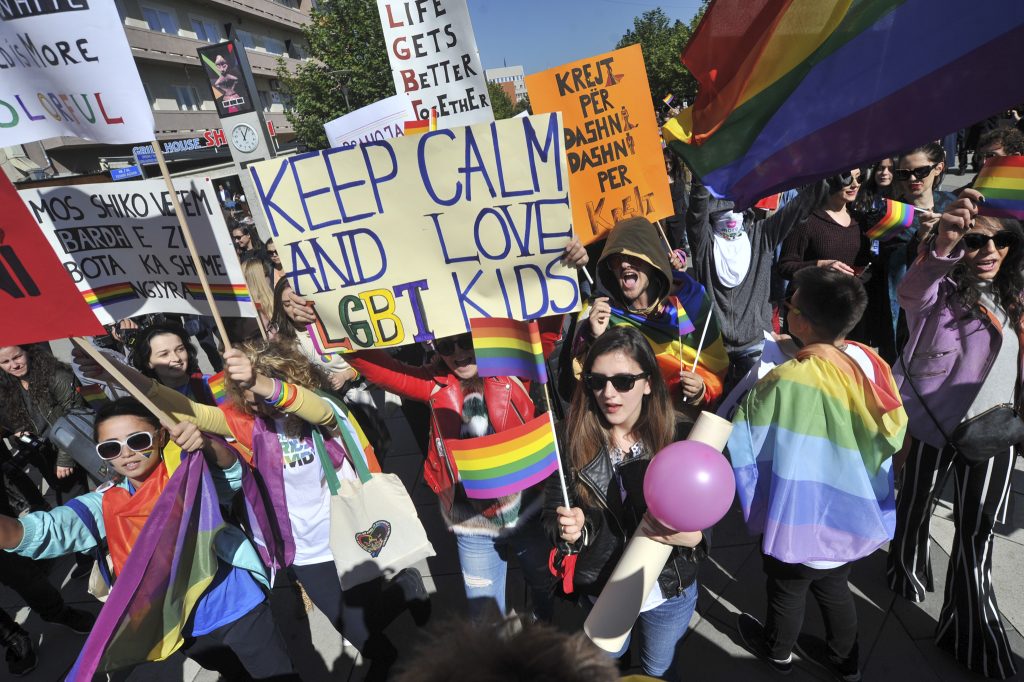 In February this year, the Center for Social Group Development, CSGD, released a report highlighting the problems that remain in Kosovo’s legal framework and media and social perceptions of the LGBTQ community in Kosovo.

While the Kosovo Constitution specifically prohibits discrimination on the basis of gender identity and sexual orientation, in a working group proposing changes to the Kosovo Criminal Code, CSDG’s recommendation to amend article 147 defining hate crimes to explicitly include these social groups was rejected.

On the other hand, CSDG’s recommendation to amend sentencing laws was ratified, meaning that if a perpetrator specifically targets a person because of their affiliation with the LGBTQ+ community, this could result in a heavier punishment by the court.

Although it inevitably makes for slow progress, Kosovo’s first Pride was a relative success, according to Morina. Comparing it to the first pride parades elsewhere in the Balkans, it ran smoothly in Prishtina, and despite constant apprehension during the parade itself, the organizers were overwhelmed with the number of people who came to support the movement.

“We received a lot of threats before the parade and they were reported in the media, so we thought that this was going to affect people showing up. It was a good feeling, and we were happy, because you look at how the first pride usually goes in the region, it doesn’t go very well, if we compare it to Belgrade or Budva, this went really well,” Morina said.

Pride week this year has expanded significantly, with workshops, art exhibitions, films and panel discussions being held in the five days running up to the parade. But according to Morina, the parade itself remains the most important event of the week, exposing people who would otherwise not be aware of the event to their message.

“We still use the word parade so that people will show up and it provides a place for people to talk about the LGBTI community,” he continued. “The main idea of the parade is just to make people aware that the LGBTI community is not something that was brought from the West, it’s not something brought by the international community, that most of us were actually born here, we’re Albanians or we’re Serbs, we are part of this society.”

“We call it parade, but let’s be honest, when you take a look at other pride parades, ours is not,” said Morina. “I was lucky enough to go to Stockholm and Amsterdam Pride, you see the difference. You know I was really happy, I was dancing last year in our parade, but at the same time, I had these mixed feelings, like ‘What’s going to happen? When are the attacks going to happen? Even though it was kind of scary, at least for a short time, we were dancing.” 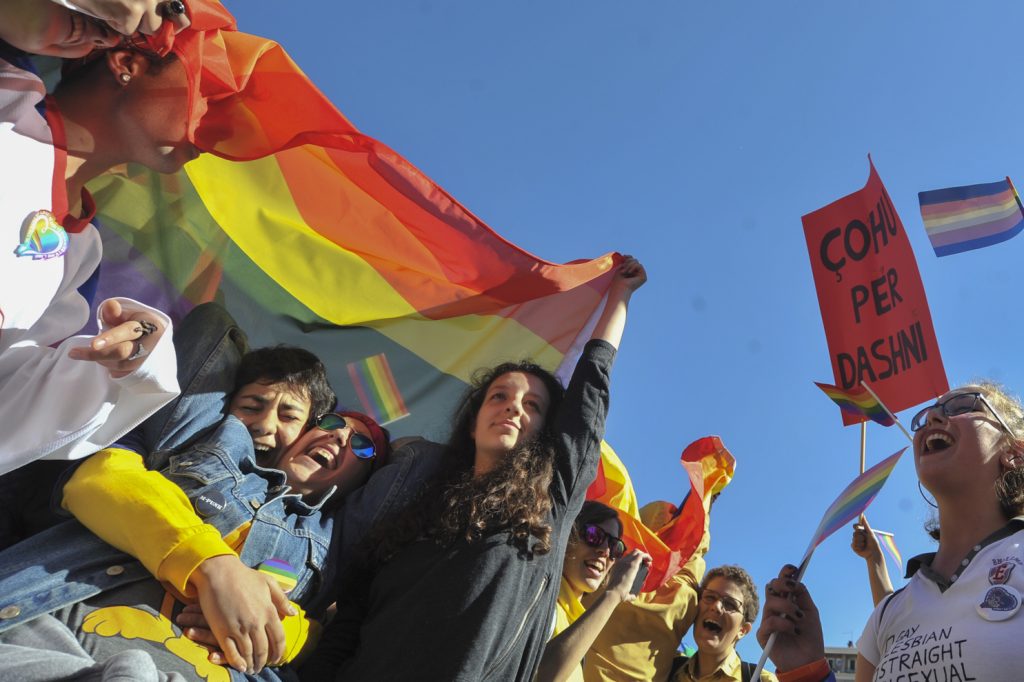 Many cities in the world support pride with cartoon-like exuberance, rainbow flags adorning every square inch of buildings, streets, people and pets in the days before and after the event. Kosovo’s Pride organizers are taking a few precautionary measures this year, however, and the celebrations may need to be a little less colorful.

Two attacks following the parade last October against individuals carrying the rainbow flags, associating them with the parade, spurred Morina and CEL to issue a warning prior to the march on Wednesday.

“Last year, the organizers and people from NGOs received a lot of threats. After the parade ended, two people were attacked because they were still wearing the flags. One of them was beaten up, the other managed to escape,” he said. “So we said that when you leave, leave in groups, remove any promotional material that would link you to the parade. We saw it as very important to put it in writing.”

Morina explained that keeping people safe will always be more important than waving the flag, and that often means accepting that those whose liberation they are marching for will not be there to see it.

“In the Balkans in general, this freedom is going to take a little bit of time. With the fact that many people still cannot attend because they’re not open or they’re too scared, of course it’s gonna take time before we celebrate,” said Morina.

Morina emphasized how important it has been for high-level politicians to express their support for the parade, and that it can give more credible visibility to the LGBTQ+ community. But the reception of Kosovo President Hashim Thaci’s appearance before the parade last year was darker than anticipated, according to Morina.

“Even though we said it would be awesome to have it endorsed by the president or prime minister, because that would present a different picture to society, but they didn’t even march. Most of them [media] saw him as a victim, that he was forced to be there by the international community,” he said. “I’m disappointed that as a president he gave interviews, but he didn’t even march with us. That shows hows much support he really has.”

In a press conference on Tuesday, political party Fjala rejected the initiative to hold the Pride parade, citing the extremist views of the LGBTQ+ community and their aim to destroy the Albanian family as justification for removing the Pride parade from public space.

Before last year’s parade, the head of the party, Gezim Kelmendi, had his Facebook post removed after writing a status deemed to be homophobic and against Facebook’s community standards in protest of the parade.

Reaching outside the boundaries of Prishtina is still a problem, and Morina acknowledged that the atmosphere of tolerance doesn’t go far beyond the city walls.

“A lot of the international community was based in Prishtina after the war, and that gave the city the feeling that things are more open and diversity is more well accepted,” he said. “But if you got to Gjakova for example, the place where I was born, it’s very different.”

Reaching outside the capital continues to be a struggle, both for Pride and CEL, said Morina. Despite trying to hold educational programs in cities selected due to their potential to accept progressive views, he recalled threats directed towards students and CEL by teachers, telling them not to attend.

“Two years ago we started having trainings in different municipalities, and we’ve been kicked out of the high schools even though we were given permission to be there,” said Morina. “In Ferizaj, in Mitrovica, we have had to move the trainings to a cafe.”

Morina says that sometimes, resorting to diversionary tactics is the only way to get the message across.

“Now when we go to schools, it has to be presented as trainings on human rights, with a little bit of LGBTI rights in there as well,” he continued. “We do it in collaboration with Kosovo Youth Council, this is the only way we can do it right now.”

According to Morina, this is not going to change if the education system and the way students are taught does not change.

“We still learn these things, and you see everything that you learn in school as right. I remember in my sociology books here, they still see it [homosexuality] as a disease, or transgender people as people who get satisfaction from wearing soldiers’ uniforms,” he said, laughing. “Which is normal if you’re in a homophobic society.”

by Nora Weller
Next: News