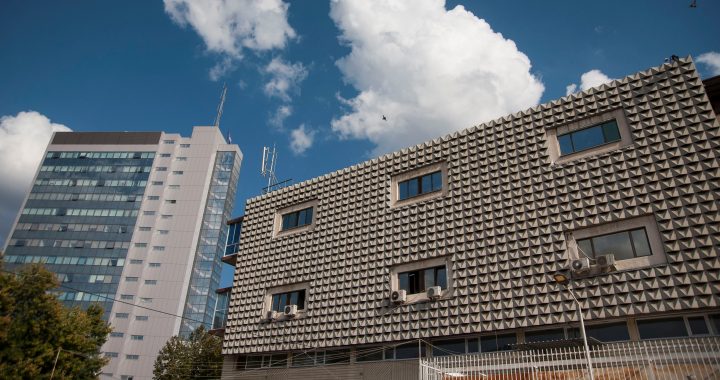 Controversy sparked last week surrounding the demolition or preservation of the communist-era shopping mall in Prishtina. Tear it down or not, room must be made in this debate for cultural heritage experts to voice their opinion.

The latest debate in Kosovo has revolved around whether the building of the former shopping mall, Germia, should be torn down and replaced with a brand new concert hall, or should its structure be protected as a piece of Kosovo’s cultural heritage, and turned into a gallery for contemporary art?

The European Commission has come forward with a sum of 15.4 million Euros to fund the construction of a building which would accommodate Kosovo’s first concert hall. Using the building of the former Germia was presented as an option, but is not suitable for the hall as it stands, so tearing it down is also a possibility.

The potential bilateral agreement between the European Commission and the municipal authorities is not clear, nor were the conditions contained within it made public.

No particular site for the hall was insisted on by the European Commission, but two conditions were publicized: the hall should be central, and it should not be close to the football stadium. This may sound very sensible, but considering the size of Prishtina and its limited options with infrastructure, this has already caused disputes and divides across social circles.

The idea of tearing this building down provoked a certain nostalgia, perhaps even an emotional reaction for some, that the world of the past was disappearing. This memory of past times was triggered and a petition was created to be signed against the tearing down of this building.

This reaction was countered by the group of classical musicians and artists who campaigned with understandable vigor for a concert hall to be built, even if it meant that the former Germia would be torn down or converted.

Contemporary artists replied to this, calling the campaign a heartless attempt to rip the city of its last remaining building of the past. Instead, they suggested, it should be kept and turned into a contemporary art gallery.

Further formal steps were taken by a local organization that deals with cultural heritage, which on the October 3, shortly after the public debate erupted, presented a formal request to the Ministry of Culture, Youth and Sports to enlist the former Germia as a cultural heritage site under the pretext that it holds historical, artistic, scientific, social, educational, economic and functional values, together with its rarity and the identity this building holds.

Following all this, the debate around the former Germia has unfortunately narrowed down to only two options: to tear it down or to preserve it as it is, and neither camp is offering professional or convincing arguments.

The Germia building is said to have been inaugurated in 1973, as a purposely built shopping mall. As a tiny child, I recall the fascination I felt seeing the escalators, they may have been the very first escalators installed in the country, and the massive glass windows which formed the edges of the building. The memory I carry of this building, the escalators and the massive glass windows no longer exist, given the interference with the building over the past twenty years.

The original architecture of the former Germia reflected the typical socialist/communist architectural constructions which were uniform throughout the former Yugoslavia. Identical buildings were constructed in different parts of the country, with numerous cities  having identical sport centers, for example.

In the meantime, substantial structural interventions have been made to it, inside and outside, presumably to accommodate its new functions. The front facade of the building has had windows added and therefore the typical communist architectural feature, the iron facade, has been altered by adding windows to it and now it looks modernized.

It is crucial that the correct information of Germia’s value as part of Kosovo’s heritage is obtained, be it architectural, cultural, both, or neither. Following this assessment, the protection that the Germia building should have will be determined.

Determining the value of a cultural heritage site is a complex matter, and it is not enough to say that it represents something of the past. A leading scholar on the sociopolitics of heritage at the University of Cambridge, Professor Marie Louise Sorensen, argues that “The past and heritage are not the same. Heritage is not the past, it is always in the present”.

Let us lift the building of Germia from the past and into the present for the purpose of this writing. What cultural values does it represent today? What sort of cultural, scientific or educational merit have we inherited from it?

The assumption that it has a certain cultural value should be rational, and it should be assessed and evaluated by the specialists in this field. Kosovo has cultural heritage protection legislation and it also has only a few but competent professionals who need to be engaged in the process.

Most naturally, it should also be determined vis-a-vis the popular view, and what cultural values it represents in the memory and history of the people and the community around it. The immediate assumption that the former Germia represents cultural heritage values and those values are shared by all, is a way of misleading public opinion.

What is almost immediately obvious is the fact that it contains typical communist architectural features, and as such, it may have architectural value. However, given the interference with the original features and the general appearance of the building, whether it qualifies as a monument of the past is also questionable, and depends entirely on expert evaluation.

Even if it holds architectural value, this does not mean that it falls automatically into the category of cultural heritage. I am very much inclined to argue that, in fact, it represents no cultural heritage value as it stands now. Its interior does not represent a particular unique way of life of a certain previous generation and era, which transmits to the current and future generations, also it does not exhibit valuable artistic and architectonic features.

I cannot imagine that we will narrow values of culture down to an escalator which does not even exist anymore. Furthermore, its originality was never maintained or preserved. Despite all this, one thing should be communicated clearly, even if it does not hold the anticipated cultural value, that does not mean that it should be torn down.

There are many examples worldwide of how to make use of a building without interfering with its original construction. For example in the city of Paris, France, experts use a method called “retrofitting,” in which older buildings serve a purpose and are of good use in the new era of their lifetime, while their structure is not interfered with.

Ironically, in the case of the Germia building, the reactions to preserve it come many years after the ongoing interference with its original structure. The current concern seems to be to preserve the building as it is, given that it is one of the few remaining with the architectural features from the past.

Perhaps this is a good sign, that we are facing a new level of awareness. Many buildings of socialist/communist times have been destroyed in Kosovo so far without much reaction from the general public.

Heritage in Kosovo with true cultural value, such as those of the Ottoman era which have shaped the culture, language and society overall, have been destroyed as a result of degradation, urbanization, lack of awareness of its historical value, or lack of timely state intervention.

Churches of the Serb Orthodox faith are not accessible for the majority of the Kosovo population, and thus many generations are being brought up missing an important link to the history and sharing of the cultural heritage which is in their immediate surrounding.

Movable cultural heritage, treasures from the National Museum were taken during the times of war and missing since 1998. Very little attention was extended to this issue. There are around 677 archeological artefacts and around 571 ethnological treasures missing from Kosovo, allegedly borrowed to travel to the museums of Novi Sad, Belgrade, and Subotica.

I chose to understand the reaction that the former Germia provoked as a cry from the people to the competent authorities that Kosovo needs to protect its heritage. Kosovo needs to engage historians, archeologists, art professionals and architects, and work in a coordinated and transparent manner to achieve a more effective way in identifying and preserving the cultural treasures of Kosovo.

After all, heritage is a means of connecting people and ideas, from the past to the present.