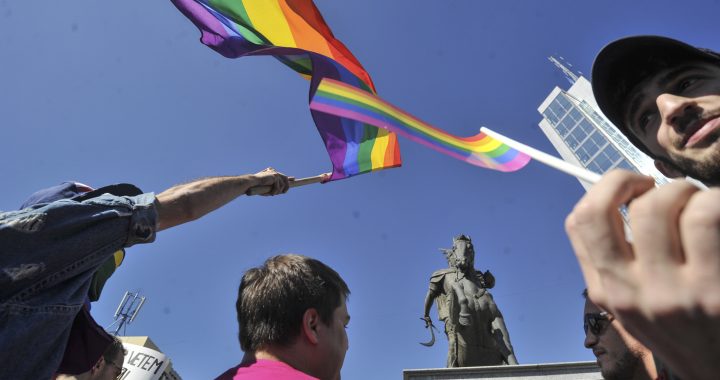 Color, pride, and the occupation of public space

As the saying goes, when someone comes out, the whole family transitions. The support and love, followed by opposition and hate, are all part of this struggle.

On Tuesday, Kosovo organized its first pride parade. As expected, once it was announced in the media, panic ensued.

Among the first to express contempt was Gezim Kelmendi, head of his religious political party Fjala and former MP. He wrote a homophobic status against the parade, only to have it removed due to its violation of Facebook’s community standards.

Another warning sent from an email address with the name “against homos” and signed under “revolted citizens” was sent to some media organizations threatening those who planned to join the parade. Meanwhile on the internet – Facebook, Twitter, and comment sections on websites – the hatemongers went rabid. “We need a jihad on faggots,” commented a Kosovar man on Balkan Insight’s article about the parade.

The hate and disgust continued online throughout the day, comparing homosexuality to pedophilia, bestiality, and necrophilia. Such fundamental ignorance towards the community is frightening. But what’s even more frightening is the unwillingness to have the conversation on the fluidity of sexualities and gender identities. Few are willing to ask questions, while the majority choose to regard LGBTI issues as a dirty joke.

It is common for the entire community to be reduced to homosexual men and gay sex, which is deemed disgusting, unnatural and dehumanizing. Strict views on femininity and masculinity are at the heart of these attitudes that seek to promote cis-dominance and heteronormativity. Religion, nationalism and ethnocentrism all promote this archaic dichotomy and insist that cis-gendered people (when one’s sex assigned at birth corresponds with one’s gender) and heterosexual people are the ‘normal’ way of being, and the rest can never be equal. Reproduction and ‘family values’ are the main arguments against the community, or as some homophobic apologists prefer to claim, “not against them, but against promoting them in public spaces.”

Kosovo is considered among the most homophobic countries in the region according to a poll on LGBTI issues conducted by National Democratic Institute in 2015. In the last three years, reports by the European Commission have noted some progress, mainly on data protection and high level political support for LGBTI rights.

However, even the later is quite superficial. In 2015, when he was an MP in opposition, the current Prime Minister Ramush Haradinaj called the Head of State Commission for Border Demarcation a ‘faggot.’ This year, however, the Prime Minister opened Pride Week, saying that “our constitution guarantees equal rights to all.” (Nevertheless, he did not show up at the parade.) Meanwhile, none of the candidates currently running for the Mayor of Prishtina attended the parade, justifying themselves with their busy campaigning agendas.

While political statements from high-level politicians play an important role in conveying a pro-LGBTI message to the wider public, they are hardly instrumentalizing their power to demand the decent treatment of the community from both radicals and the police. One way to do this would be to insist that verbal and physical harassment against the LGBTI community is properly investigated. Another would be to emphasize training of the police who sometimes, as LGBTI community have reported, mock people who go to the station to report abuse.

In December 2012, when Kosovo 2.0 was publishing its magazine’s print edition on sex and sexuality, a group of men entered the Palace of Youth and Sports in Prishtina where the activity was planned to take place and physically attacked one of the Kosovo 2.0 employees and destroyed the setup of the magazine’s launch party.

An investigation by Preportr reveals that the LGBTI community in Kosovo has lived in fear and discrimination. It presents the story of Blendi, a young man, a law student who was tricked online by a man and sent to a park where he was verbally abused, beaten, and his clothes were taken off by two other men who attempted to rape him. He encountered further abuse when he went to the police, who mocked him, and then at home with his father condemning him for the ‘shameful person he has turned out to be.’

Safety is a fundamental human right, and LGBTI people are amongst the most unsafe and shamed citizens in the country. That is one of the key issues that the LGBTI struggles with and fights for.

Overcoming dominance and abuse takes time and courage. While proper education on diversity and acceptance should start at the very early stage, Kosovo’s education system has a long way to go and struggles with basic necessities. Therefore, occupying the public space is a must. But instead of simply demanding people to come out, we must first fight for a safe environment that enables gender identities and sexualities to be demystified and deconstructed through parading, debating, listening and willing to have conversations on individuality, diversity and equality.

It is about giving the very basic message that transgendered men and women, gays and lesbians, are all human beings, and want to live their lives in peace and express themselves freely and love whomever they choose without constraint. That is why the community chooses the word ‘pride,’ to emphasize that sexuality is nothing to be ashamed of.

Tuesday’s sunny pride parade was just this. The majority mixed with the LGBTI community, marching and cheering, singing and dancing. Such support for the colorful community is a significant step. As noted in the Transparent TV show, “When someone in the family comes out, everyone transitions.” Hopefully, such activities will help the people in Kosovo transition into something more inclusive and help change people’s minds and attitudes towards gender and sexuality.