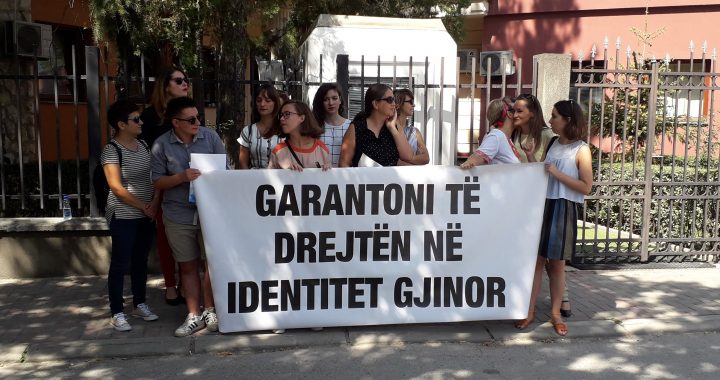 Activists holding up sign reading "Guarantee the right to gender identity" in front of the Constitutional Court in Prishtina in 2018 | Photo: Eve-anne Travers

A public gathering in support of Blert Morina, the first transgender person to request official change of name and gender marker in Kosovo, was held in Prishtina on Tuesday.

Citizens gathered outside of the Constitutional Court of Kosovo on Tuesday, demanding that the institution addresses a case submitted by Blert Morina, whose request to change his name and gender marker on official identification documents was rejected earlier this year.

Organizer of the gathering, Lendi Mustafa, said that this a human rights issue the court must review, and they should assess whether the decision made by the Agency of Civil Registration was in line with the country’s constitution.

“The Office of Civil Status in Gjakova and the Agency for Civil Registration have refused this request, violating Blert’s rights for privacy and their obligations for the protection of human rights, which come from the Kosovo Constitution and laws in power,” he said.

Morina’s original request was rejected in April, and despite a suit also being filed to the Basic Court in Prishtina, Mustafa said that no progress is being made in this regard.

“This lawsuit is not an effective judicial means because of delays in the procedures and the special circumstances of the case,” said Mustafa. “It does not address human rights violations in a reasonable time according to Article 31 of the Kosovo Constitution and Article 6 of the European Convention of Human Rights.”

The municipality’s response concerning Morina’s request to change his name and gender marker was that the official documents, as they stand, do not present any kind of barrier to his integration into society, offering no further reasoning.

“First we got the decision from the Municipality of Gjakova, and we thought the decision was discriminatory, so we decided to let the Ombudsperson Institution know,” Morina explained. “We knew it was rejected because the application also included a change in the gender on the official document.”

Article 6 of the administrative instruction on name change procedure allows for a person to change their name if it does not correspond to their gender identity. However, Morina explained that it was his request to change the gender marker from an ‘F’ to an ‘M’ that caused the problem, which has no clear legislative or administrative procedure.

Supporting Morina’s case, Mustafa said that it is time for local institutions and society to offer protection and respect to the rights of the transgender community.

“The lack of recognition of gender identity in Kosovo is a violation of fundamental rights, more precisely a violation of the right to privacy and dignified life, and [the state] fails to offer protection against discrimination for transgender people,” said Mustafa.

Morina explained that this will be the first time that the court has had the chance to deal with a case of gender discrimination like this.

“Having the march is super important before the decision is taken by the court,” said Morina. “We need to let people know that we are waiting for that decision and it’s important for the transgender community.”

Morina hopes that the outcome of his case will make life easier for others who hope to change their gender identification markers and name in the future, simplifying the administrative procedures and ensuring that it is not obligatory for individuals to undergo gender reassignment surgery before they have the right to change their name.

“There are persons who say ‘yes, I want to identify as the opposite sex,’ but not all transgender people decide to go through the full transition,” said Morina. “I think I’m in a pretty privileged position personally, so I want to use that position to raise awareness for the rest of the transgender community.”

Mustafa said that the needs of different social groups has to be reflected in the country’s legislation.

“The needs of the transgender community are needs of Kosovo citizens,” he said, “and their exclusion means failure in the protection of guaranteed rights through the Kosovo constitution.”

Plator Gashi contributed to this article.