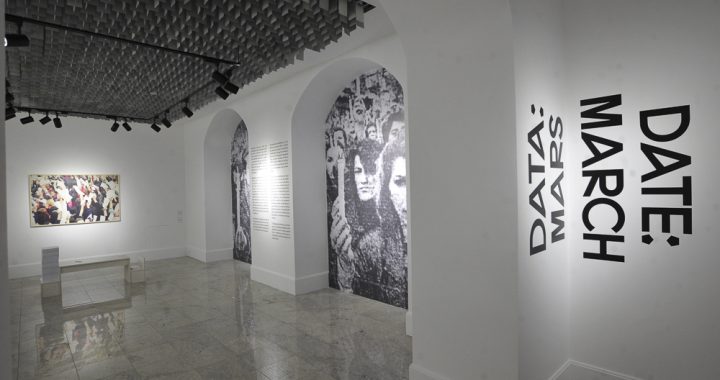 Exhibition shines a light on women’s political activism in Kosovo

A new interactive art exhibition exploring the participation of women in the March 1998 protests in Kosovo opened at the National Museum of Kosovo on Thursday.

Showcasing oral histories and a visual archive of photographs, press clippings and videos, ‘Date: March – women’s forgotten activism in Kosovo’ opened its doors this Thursday, August 30. Running until September 28, organized by the University Program for Gender Studies and Research in partnership with German peacebuilding organization forumZFD, the exhibition aims to start a conversation about political participation, featuring stories of women’s activism at the break out of the Kosovo war.

Using the month of March 1998 as a snapshot of a tumultuous decade in Kosovo, Date: March challenges the eradication of women’s experiences of that time from collective memory, and creates a space that allows visitors to engage with alternative narratives from a recent past.

“The exhibition was built in a way to invite people into conversation,” said Linda Gusia, professor of sociology at the University of Prishtina and researcher/organizer of the exhibition. “This is only one month of the long, large and dynamic activism of women in Kosovo during the ‘90s. We selected one month, March, to show what they have done with their activism, to create a conversation and invite for the documentation of women’s activism in the ‘90s.”

The exhibition combines conversations with prominent political activists, who shared their personal experiences about symbolic moments from that month, with artistic interventions including archived photos, sound installations and news footage that documented the women’s protests at the time.

On March 16, 1998 the ‘Bread for Drenica’ protest was held, where thousands marched towards Drenica holding loaves of bread in their hands to symbolize the dangers people in the region faced from Serbian authorities, just one of the events showcased at the exhibition.

“The idea is to have a conversation and reflect on the past, and get inspired for further activism, but also invite [people] for documentation,” said Gusia. “It is very important to invite everyone to tell their stories, photos, and build a common history, and to remember and reflect so that wars and crimes do not happen anymore. It is very important to remember for that reason.”

On International Women’s Day in 1998, thousands of Kosovar women marched to the American Center in Prishtina in protest of the widespread human rights abuses occurring in Kosovo at the time, holding up white sheets to symbolize that there was nothing left to say.

Date: March also looks to document the impact left upon the visitors to the gallery, in particular those that would not remember the protest themselves, Gusia explained.

Around the gallery, piles of blank sheets of paper can be found. Visitors to the exhibition are encouraged to fill the sheets with their own stories, experiences and impressions of the protests and of March 1998.

Later in September, a roundtable discussion will be held at the gallery, bringing together women activists to talk about the protests and reflect on their own experiences of activism 20 years later.

Plator Gashi contributed to this article.