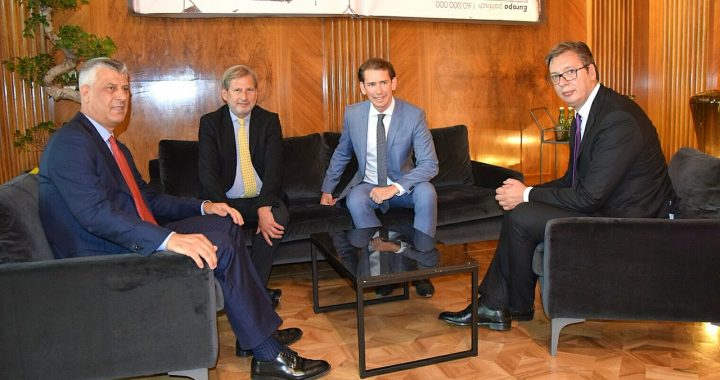 Why partition risks peace in Kosovo and the region

The consequences of a territorial swap won’t end with Kosovo and Serbia - this could open old wounds throughout the Balkans, paving the way for tension and conflict.

Presidents Hashim Thaci and Aleksandar Vucic, of Kosovo and Serbia respectively, have recently put forth a proposal for a land swap. Or in more precise terms, a partition of Kosovo.

While neither of the presidents have been clear on what the deal would entail, Thaci has repeated that it would be an opportunity for the Presevo Valley, a predominantly Albanian region in southern Serbia, to join Kosovo.

Ostensibly, the deal would settle once and for all the dispute between Kosovo and Serbia, Kosovo would be fully recognized and become part of the United Nations, and both countries could meander together towards a future in the European Union.

The National Security Advisor John Bolton said the United States will support any mutually agreed upon solution.  The European Union seems to tentatively agree that discussions should begin along these lines. Only Angela Merkel’s Germany continues to be against any border changes, a continuation of the policy once seen as sacrosanct by the international community.  Meanwhile, the idea has come under fire from many other stakeholders, experts of the region and more prominently from the three former High Commissioners in Bosnia and Herzegovina, who also issued a statement against any proposed deal.

Partition has never historically worked out well. From India-Pakistan, Ethiopia-Eritrea, Ireland-Northern Ireland, Palestine-Israel, Cyprus-N. Cyprus to Bosnia-Herzegovina-Republika Srpska. It has always been a violent exercise that inevitably becomes about ethnic hegemony and displaced peoples. “Partition remains something that powerful states may implement on the anatomies of weaker polities—as Serbia tried to do to Bosnia-Herzegovina,” the academic Brendan O’Leary noted.

It isn’t illegal however. The Badinter Commission, when providing legal advice on the breakup of the Former Yugoslavia in 1992 stated: “whatever the circumstances, the right to self-determination must not involve changes to existing frontiers at the time of independence except where the States concerned agree otherwise.”

At the European Forum Alpbach this year, Thaci said of himself and Vucic, “We’re not problematic guys – we are trying to do an agreement.” Yet, the agreement itself might be one of the most problematic deals with ramifications for both Kosovo and the entire region.

Some of the immediate regional ramifications look like this:

Republika Srpska, RS, Bosnia and Herzegovina’s Serb-ruled region,  would immediately secede – something that the RS President Milorad Dodik has been warning of for some time.  I have no doubt that this would soon be followed by Herzegovina, the Croatian part of Bosnia, seceding too and de facto hammering the last nail into the coffin of  the Dayton Agreement. Both would attempt to join Serbia or Croatia, respectively, and could potentially ignite another civil war as the remaining Bosniak dominated rump would try to hold onto their territory. The RS could attempt to seize more territory particularly if they have backing from the Serbian military.

Despite blithe assertions that Macedonia has overcome its nationalist past with a new multi-ethnic government that is pro-Atlantic in viewpoint and has neutered the former VMRO-DPMNE, nationalist Gruevski-led government, this situation is now only one year old. Macedonia still faces a crucial referendum on the country’s name in the fall that, if it is a yes vote, could pave the way to NATO and eventual EU membership. If Albanian nationalists in Macedonia decide to push for a ‘Greater Albania’ in the wake of a ‘land swap’ in the form of reunification with Kosovo and/or Albania, this last year of positive reconciliation processes in Macedonia would be finished, and again civil war may be a possibility.

Why stop here? Joining Kosovo with Albania would obviously come next. Then the Albanian part of Montenegro could rejoin Albania and Kosovo. Finally Chameria could join Albania from Greece. That way, we could restart World War II.

There was a reason for the international community’s insistence on a clause against the shifting of borders to be put into the Kosovo constitution. After years of peace, however unsatisfactory they may have been, shifting borders will create a chaotic situation that will once again swallow needless energy and lives. However, it will give great joy to the nationalists, warmongers and authoritarians who have long sought to destroy multi-ethnicity in the Balkans.

Out of all of the hot takes, twitter chatter, the learned academic analysis and think tankery, one question hasn’t been considered much: who benefits from all of this?

Let’s say that Serbia recognizes Kosovo, Kosovo gets the UN seat and the five outliers in the EU recognize its sovereignty. So far it seems the deal between the two states will not guarantee visa liberalization allowing Kosovo citizens to travel visa-free like the rest of the Balkans. Nor does it address issues like state capture or rule of law –issues which are currently bringing Kosovars onto the streets in their thousands to protest. Nor does it address education, healthcare or poverty.

But it’s these internal issues that are at the forefront of the average Kosovar’s life. While having a UN seat and being recognized by all of the EU members are the kind of macro issues that clearly need to be dealt with, that just over 57% of Kosovo youth are unemployed would seem to be just as pressing. A UN seat would not erase poverty in Kosovo.

Many ordinary Kosovars would also not agree to give up a swathe of land which holds one of largest water reservoirs in the country and has at least half of the largest mine.  Essentially, Kosovo is giving up strategic economic and structural assets for a piece of land abutting crucial road infrastructure that directly connects Southern Serbia to all points in the Mediterranean, while bypassing Kosovo completely.

Christopher Hitchens once wrote in an article from 2003, entitled the The Perils of Partition:

“The largely secular Muslims of Bosnia and Kosovo were, however, the main victims of the cave-in to partition in the former Yugoslavia, and are now the chief beneficiaries of that policy’s reversal. They were also among the first to test the improvised but increasingly systematic world order, in which rescue operations are undertaken from the developed world, assisted by a nexus of nongovernmental organizations, and then mutate into semi-permanent administrations.”

Kosovars are being told that this deal will end the isolation and allow Kosovo to develop into a strong, independent state. However, past history, much of it recent history from this region as well as globally,  rebuts that assertion. The question is: are we making the same mistake once again?

Bronwyn Jones is an international development expert, writer and editor. She has lived, studied and worked across the Balkans for almost 20 years. Currently, she works as a consultant for international organizations in Prishtina, is a member of the first women’s rugby club in Kosovo, and runs the blog SparkFest.