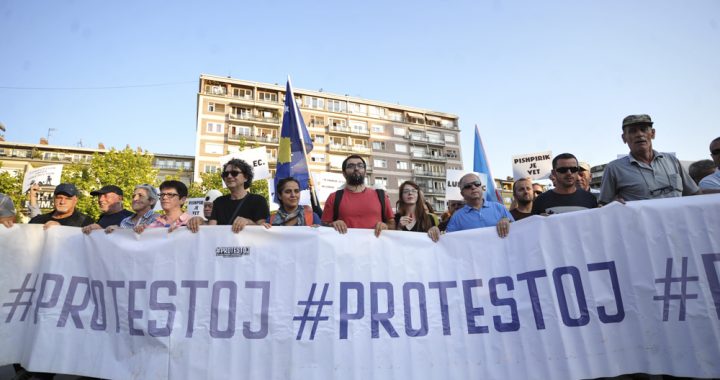 A protest for resignation and new elections in Kosovo

Protests in Prishtina against political interference in the Kosovo judiciary this week have extended to further calls for resignations and accountability.

From the beginning, the main demands of the informal ‘Protestoj’ group were the resignation of Kosovo Chief Prosecutor Aleksander Lumezi, vetting of prosecutors and judges in the judicial system, and the cleansing of thousands of fraudulent veterans from the Kosovo Liberation Army, KLA, veterans’ lists.

It is obvious that Lumezi was appointed to his position as a result of Pronto, which means he is a tool of the corrupted and blackmailed people in power. [The Pronto affair is a series of wiretaps revealed in 2016 that featured the Democratic Party of Kosovo, PDK appointing party members to control independent agencies and state institutions].

Furthermore, he interfered in the investigation of Elez Blakaj, a former prosecutor who publicly resigned after claiming intimidation from Lumezi and political pressure, Lumezi requesting explanations from Blakaj as to why he would interview Kosovo Assembly Speaker Kadri Veseli (as a witness no less – imagine if Blakaj had interviewed Veseli as an accused). According to Blakaj, Lumezi claimed that Veseli should not have been interviewed because ‘MPs have immunity’.

So, Chief Prosecutor Lumezi does not know that the Constitutional Court, in its interpretation of this issue, has never given anybody immunity when it comes to criminal acts. Moreover, Blakaj claims that Lumezi attempted to intimidate him by threatening to send him to the Disciplinary Committee if the indictment on ‘Pronto’, which had already been sent to court, was not reviewed.

Another demand is the vetting of members of the judicial system in Kosovo, which entails the reexamination of all decisions made by prosecutors and judges so far, and the verification of their wealth. To achieve this goal as a society, we also need to help of the international community.

Our third demand, which is closely linked to the first two demands, is the cleansing of thousands of fake and fraudulent veterans from the lists [KLA veterans eligible for pensions from public funds], who damage the Kosovo budget by millions of euros. How can you explain that they both dub themselves liberators, and also steal from the budget of their own country, the poorest country in Europe? I am convinced that if we had a quisling government, it would treat Kosovo’s budget with more frugality.

Speaking of the veterans’ lists, there need to be indictments for the commission members who inflated these lists, including Minister of the Kosovo Security Forces Rrustem Berisha, and his deputy Agim Ceku.

Of course, our demands should not be limited to this. It is shameful that 20 years after NATO’s intervention in Kosovo we are led by corrupt and blackmailed politicians, the very individuals for whom the international community founded the Specialist Chambers.

Also, it is shameful that we are led by a prime minister who insults Prosecutor Blakaj by saying that he “ran away to Bllaca” refugee camp in Macedonia during the Kosovo war, simultaneously offending almost a million other citizens of his country who were violently deported by Serbian forces.

Prime Minister Ramush Haradinaj and other ‘liberators’ need to know that 2000 Serbian policemen and 1500 Serbian soldiers were supposed to remain in Kosovo, but in May 1999 the international community decided that none of them could stay, because Kosovo Albanian refugees would refuse to return. This means that the refugees (including those in Bllaca and Stankovec) are the liberators of Kosovo.

Also, it is insulting that we are led by President Hashim Thaci who, without consulting other institutions, political parties, and most importantly the citizens of Kosovo, unconstitutionally discusses the territorial integrity of the country.

These individuals have never had the legitimacy to speak on Kosovo’s behalf. Also, the international community, especially Kosovo’s allies that have recognized its statehood, should not support the main institutional heads in Kosovo because of their involvement in these crimes.

The author is an activist of the ‘Protestoj’ group. The opinions expressed here do not necessarily reflect the opinions of the other members of the group.