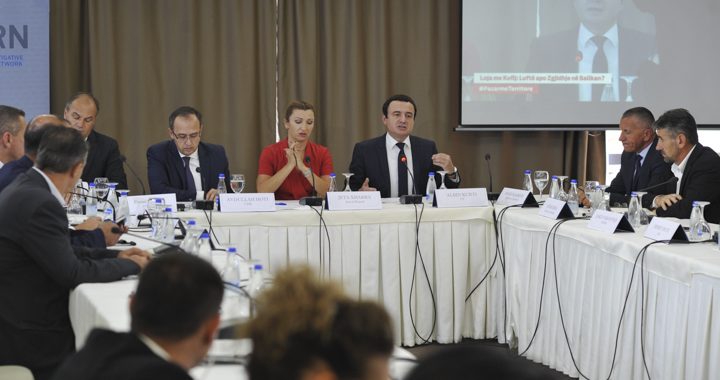 Politicians from Kosovo and southern Serbia told a BIRN Kosovo roundtable discussion on Wednesday that border correction was a dangerous idea that would play into Serbia's hands.

A roundtable organized on Wednesday in Prishtina by BIRN Kosovo’s show “Jeta ne Kosove” heard local politicians warn that a territorial swap between Serbia and Kosovo could worsen regional instability.

Albin Kurti, leader of Vetevendosje, told “Border Games: War or Solution in the Balkans” that Serbia had been waiting for an opportunity to correct the borders all along. Kurti said Serbia was only waiting for Kosovo to make the first move.

“Serbia always wanted territorial exchange, but whoever asks for territorial exchange first gives up the territorial integrity of his state,” he said, adding that “some exponents of power here gave up the [mainly Serbian] north [of Kosovo], but they’re not getting the valley of Presevo [in southern Serbia].”

“There’s a German expression in chess, ‘zugzwang,’ I believe, which is a unique situation where you want your opponent to have his turn,” he said.

“This is also the situation with territorial exchange; whoever takes the first step is in the lower position,” Kurti explained.

Kurti compared Kosovo’s and Serbia’s presidents to autocrats, accusing them of treating territories as their own private lands.

“Now all we need is for Thaci’s son to marry Vucic’s daughter and we’re back to how it was a few hundred years ago,” Kurti stated.

The opposition parties initiated by the Democratic League of Kosovo, LDK, said they were willing to vote for a resolution which has only one point – that “nobody has the mandate to negotiate about territories”.

The head of LDK’s parliamentary group, Avdullah Hoti, said Kosovo President Hashim Thaci had no authority to put “border corrections” on the negotiating table with Serbia.

Hoti said that the idea of border correction would be “tragic” for those citizens who become involved in “these games”.

“What’s even more tragic is the position being held by our president, his behavior in Austria, where he said, and I quote: “Please leave myself and Vucic to settle our disagreements on our own,” Hoti continued.

Shaip Kamberi, the mayor of Bujanovac, a mainly ethnic Albanian town in southern Serbia, said he did not support any land swaps. “We did not say, ‘You get the North while take the Presevo Valley,’” Kamberi said.

However, he added that Kosovo was “obliged to discuss, if not territorial exchange, then the the rights [of Albanians in southern Serbia]”.

Salih Salihu, head of the local assembly of Presevo, another mainly Albanian town in Serbia, said that while Albanians wanted the Presevo Valley to join Kosovo, it would remain a dream.

“As if Serbia will give up the Presevo Valley without any territorial exchange! As we know Serbia, this is impossible,” Salihu said.

Salihu complained that Kosovo’s governments had not helped the Presevo Valley in the same way that Serbia was helping Serbs living in north Kosovo. “The [Presevo] Valley should be included in the Kosovo budget,” he said.

Enver Hoxhaj, the Deputy Prime Minister of Kosovo and deputy head of the ruling Democratic Party of Kosovo, PDK, agreed with the representatives of Presevo Valley that there had been lack of support from Kosovo in the last ten years.

“We haven’t had a state approach on how to deal with Albanians in the Presevo Valley; we don’t have a strategy for many other things as well. It’s difficult to make a political strategy, never mind political action,” Hoxhaj said.