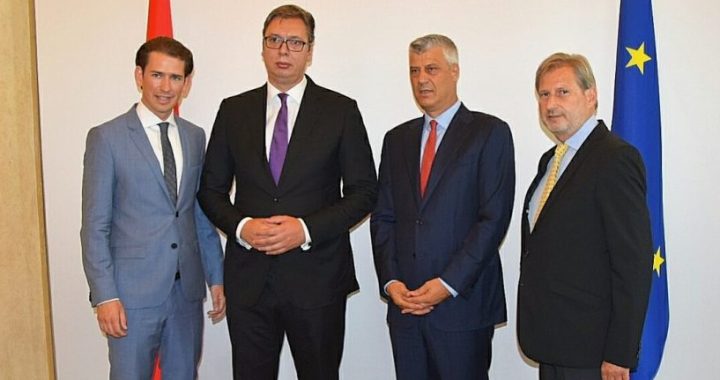 The international community would accept territorial swaps between Kosovo and Serbia, provided Kosovo’s role as a political pawn remains steadfast.

Proposals for swapping territory between Kosovo and Serbia have previously been dismissed by the EU and US as naive and implausible at best; outdated ethnic-reductionism, incompatible with contemporary international norms at worst. And yet, while not universally endorsed, the idea is now evidently gaining western support.

This has, of course, come as a shock to Kosovo’s Albanian population, who, since 1999, have seen the West as a steadfast friend. Yet, the plans now afoot highlight the reality of the relationship between Kosovo and its external patrons; the West has always been interested in Kosovo not because of any particular love for its people, but rather because of its instrumental value.

This instrumental value stems to some extent from geopolitical considerations, but it has more to do with Kosovo’s propaganda worth. “Saving” Kosovo, and thereafter building a “peaceful” Kosovo, are tropes which have been employed habitually by the West since 1999 to craft an image of its own power, capacity, and benevolence to be presented to the rest of the world. Like so many foreign powers before them, the West does care about Kosovo, just not necessarily the people who live there.

The West’s instrumental view of Kosovo can be seen throughout its recent history; when Kosovo’s assembly declared independence in 1990 it was simply ignored by the West; when Kosovo’s elected yet unofficial President Ibrahim Rugova asked to attend the European Union’s “Conference on Yugoslavia” in August 1992, he was advised to stay away. Ultimately, Rugova’s policy of peaceful resistance in Kosovo – in stark contrast to the violent tactics of others at the time throughout the former Yugoslavia – won him little more than empty plaudits, culminating in Kosovo being simply ignored at the Dayton Agreement in 1995.

Of course, NATO did launch a military intervention in 1999, yet while this was unsurprisingly welcomed by Kosovo’s Albanian population, even then the West’s support was clearly limited. To avoid incurring casualties, the NATO intervention was limited to air-strikes from 15,000 feet; while this guaranteed NATO’s safety, it significantly limited their capacity to protect civilians on the ground. Indeed, NATO’s intervention precipitated a massive round of ethnic cleansing perpetrated by Serbian forces which NATO aircraft were powerless to stop. But protecting victims of Serbian aggression was arguably not the primary aim of the intervention; as General Wesley Clark, Supreme Allied Commander of NATO at the time, stated, “this wasn’t a conflict strictly about Kosovo. It wasn’t even a conflict ultimately about ethnic cleansing. It was a battle about the future of NATO, about the credibility of the United States as a force in world affairs.”

That NATO was not purely motivated by a desire to help Albanians in Kosovo was naturally of minor concern to the hundreds of thousands of refugees who returned to Kosovo in the wake of Milosevic’s capitulation to cheer their liberators; UNMIK and KFOR were thus welcomed by the vast majority of Kosovo’s Albanians who believed these organizations were committed to helping them build a new free and prosperous Kosovo.

Yet, when NATO’s intervention ended, a mafia-like group from within the KLA began to capture Kosovo’s institutions, often through the use of force. Rather than confront this group, the internationals turned a blind eye to their activities in return for assurances that a veneer of “order” would be maintained, understood narrowly as the absence of large-scale conflict and assurances that Albanian separatism elsewhere would not be supported. Of course, the ordinary people of Kosovo suffered as a result: as the elite plundered Kosovo’s meagre resources, the people endured poor education, inadequate healthcare, environmental pollution and an increasingly corrupt political system, although it goes without saying, the hardships endured post-1999 were tolerable in comparison to those suffered during the Milosevic years.

Ultimately, the livelihood of the people of Kosovo mattered less than the image of Kosovo presented by the West. In their determination to craft a “Kosovo” that could be put to PR use, international actors engaged in extreme micro-management. Indicatively, Kosovo’s flag, anthem and even its constitution were designed by the internationals. While each were intended to create an image of Kosovo as “multi-ethnic”, “free” and “prosperous”, the reality was quite different. Kosovo has continued to suffer from high unemployment, widespread corruption and ethnic segregation. The latter – evidenced in the sharp divides which persist in Mitrovica and Serb-majority towns like Gracanica – are themselves evidence of the contrast between the rhetoric of the internationals and the reality of the policies they have imposed. Ethnic quotas in parliament – and other governmental institutions – and the creation of ethnic municipalities, are both policies foisted upon Kosovo by the internationals.Yet, far from creating a functioning multi-ethnic republic, these policies have legitimised ethnic difference as an acceptable political cleavage. Thus, despite the claims whispered wistfully by foreigners when they lament Kosovo’s lack of progress, Kosovo is not so much beset by “ancient ethnic hatreds” as it is the victim of external mismanagement.

Though ostensibly independent since 2008, in recent years Kosovo has been forced to agree to a series of demands made by the international community despite a pronounced lack of public support; this includes the creation of the Kosovo Specialist Chambers and the border deal with Montenegro. Far from being designed to better the lives of people in Kosovo, these deals have primarily been aimed at facilitating the integration of Kosovo’s neighbours into NATO and the EU. Yet, paradoxically, Kosovo’s own prospects of joining these organizations remains negligible. Thus, in many ways the internationals love Kosovo’s people when they are “grateful foreign victims”; they are not keen, however, on treating them as genuine European equals with independent agency, who can be admitted into their ranks. Perhaps the most obvious evidence of this is the fact that Kosovo and Belarus remain the only countries west of Russia that do not qualify for Schengen visas. “We support you” appears to be the logic, “so long as you stay where you are, wave our flags, and toe the line.”

The distribution of power at the international level has shifted and Kosovo’s patrons are re-evaluating their priorities and alliances. As has been the case so many times throughout its history, Kosovo is now prey to the vagaries of the great powers. As the US and the EU scramble to steer a new course, the depth of their commitment to ostensibly inviolable liberal norms, such as pluralism and territorial integrity, is laid bare; so too, is their true commitment to Kosovo and its people. The proposed border changes – or whatever particular euphemism is employed – exposes Kosovo’s status as a pawn whose very contours can be carved up to serve external interests.