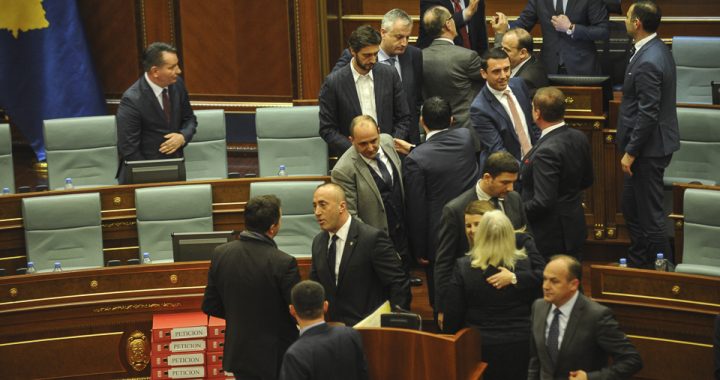 With 80 votes in favor, the Kosovo Assembly ratified the border demarcation agreement with Montenegro after Vetevendosje made several attempts to obstruct the session with tear gas.

The Kosovo Assembly reached the 80 votes needed to ratify the controversial border demarcation deal with Montenegro on Wednesday evening, following two days of debate and interruptions with tear gas in the Assembly.

The agreement was ratified with 80 votes in favor and 11 against.

Early on in the session, four tear gas canisters were released in the Assembly room, leading the MPs to take a brief break.

As soon as the session continued and Veseli called for a vote, a second round of tear gas was set off by two Vetevendosje MPs. The Assembly continued to break and reconvene until around 7:00 pm, with Vetevendosje setting off tear gas canisters on four separate occasions.

“Congratulations on the first day of spring. Today, the long political winter for Kosovo citizens ends. Today, the spring of free movement starts for our citizens,” he said.

Over two and a half years have passed since the border demarcation deal between Kosovo and Montenegro was signed in Vienna. The original deal, opposed by current Prime Minister Ramush Haradinaj and opposition party Vetevendosje, had struggled to make it to the Assembly floor for a vote amid protests inside and outside of the Assembly.

In February this year, President Hashim Thaci issued a joint statement with Montenegrin President Filip Jovanovic, amending the original agreement with a promise to form a joint task force to redraw borders once the deal is ratified by Kosovo parliament. Until today, however, this breakthrough had failed to draw the necessary number of votes to pass the deal, which is one of the two remaining criteria for a visa-free regime with the Schengen Zone.

On Wednesday, the governing coalition made up of PDK, AAK, Nisma, AKR and 6+ all voted in favor of the deal. Opposition party LDK also supported the bill. Vetevendosje, which originally opposed the deal in tandem with AAK and NISMA, obstructed the vote with tear gas but was not in the hall when the vote finally happened. The Group of Independent Deputies, 12 MPs who recently split from Vetevendosje, also opposed the deal.

Initially, MPs of the previous legislature from Vetevendosje, the Alliance for the Future of Kosovo, AAK, and NISMA were steadfast in their refusal of the agreement, claiming that with it Kosovo would lose some 8,000 hectares of land.

They employed various methods to reject the deal, from throwing eggs and water bottles to the setting off tear gas canisters to disrupt Assembly sessions.

Violent protests followed, with MPs and party members arrested and even sentenced for using hazardous weapons. One Vetevendosje MP and three activists were accused and sentenced on terrorism charges by the Basic Court of Prishtina related to an attack on the Kosovo Assembly building. A few weeks ago, the Court of Appeal released the accused, sending their case to retrial.

After the vote, Dardan Sejdiu, a former Vetevendosje MP who is now the leader of the Group of Independent Deputies, stood by his argument that the border demarcation deal is harmful for Kosovo.

“Through its vote, the Group of Independent MPs showed that it believes that this agreement is harmful and 8,200 hectares of the Republic are being given away,” he said.