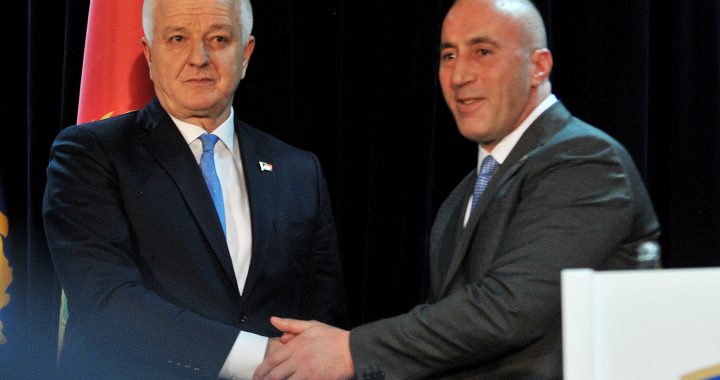 In a joint statement, the presidents of Kosovo and Montenegro announced a new annex agreement, a breakthrough in finalizing the border demarcation between two countries.

A joint statement issued by the Presidents of Kosovo and Montenegro at an extraordinary press conference in Prishtina foresees the ratification of the border demarcation deal, leaving open the possibility for ‘correction’ of exact borders later on.

According to this new agreement, the two countries will establish a Joint Working Group that will delineate the border once both countries parliaments’ have ratified the original agreement.

Montenegro parliament has already ratified the agreement, but in Kosovo the deal was received with controversy, as opposition parties claimed the deal was unfavorable for Kosovo. Rejecting the deal, opposition parties staged walk-outs and released tear gas in parliament to stop the bill from going to a vote, eventually sending the country into snap elections in June last year.

“The parties agree that during this process, the joint working group will identify and address potential disagreements during the demarcation of the border according to this annex agreement,” the joint statement of the two presidents reads.

“In this anniversary of Kosovo’s Independence, I am happy that today we have achieved this annex agreement for the ratification, review, and correction of border demarcation with Montenegro. Today it was sealed that the sectors in direction of Cakorr and Zhlep will be reviewed and corrected,” Haradinaj wrote on Facebook.

The major breakthrough comes immediately after a state visit of Montenegrin Prime Minister Dusko Markovic in Prishtina, during which he met with Prime Minister Haradinaj and President Thaci.