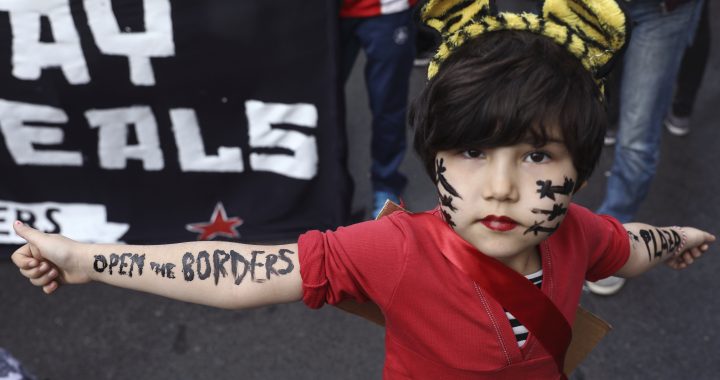 A girl poses for a photo during a rally against the EU-Turkey deal blocking mass migration into Europe , in Athens, Saturday, March 17, 2018. | Photo: AP Photo/Yorgos Karahalis via Beta.

The number of Kosovars seeking asylum decreased last year, similarly to other countries in the region, but Albania continues to be a concern with over 20,000 applicants in the past year.

There were 5,310 first-time asylum seekers from Kosovo in the EU during 2017, according to new data published by Eurostat, the EU statistics agency.

The number indicates a drop of first-time applicants over the past few years: 9,200 Kosovars applied for asylum in 2016, a stark contrast to 2015 when almost 70,000 Kosovars sought asylum in western European countries, often after crossing into the Union illegally through Hungary.

The number of asylum-seekers in the EU was cut almost in half in 2017 compared to 2015 and 2016, when around 1.2 million people applied for asylum at the peak of the Syrian crisis. Germany remains the main country of destination, accounting for 31 per cent of the total applicants.

Following this global trend, Kosovar applicants have also dwindled during the past year, but the number of young and minor applicants remains a concern.  In 2017, 2,140 of the asylum seekers from Kosovo were between the age of 18 and 34, while a large number of them — 2,055 — are under the age of 18.

Kosovo, recognized as a safe country of origin by most EU member states, is the only western Balkan country without a visa-free regime for the Schengen Zone. In the past, experts have argued that one of the major reasons for the continued delay of Kosovo’s visa liberalization is the fear that Kosovo poses a high-immigration risk. According to Kosovo’s roadmap for visa liberalization, however, the only remaining criterion, after the ratification of the demarcation deal with Montenegro, is an improved track record on the fight against corruption.

Albania, which has also experienced a drop in asylum applicants over the past few years, remains on the top seven list of origin countries. Over 22,000 Albanians applied as first-time asylum seekers in western Europe in 2017, a slight drop from 29,000 in 2016 and a stark contrast from the 66,000 that fled the country in 2015.

Meanwhile, Serbia trails close behind Kosovo, with 5,055 asylum seekers in 2017, a slight drop from numbers in 2016, when almost 9,000 Serbs applied for asylum in the EU.

Macedonia, which is a candidate for EU membership, follows closely behind, with over 4,000 applicants.

Other Balkan countries seem less interested to apply for asylum in Europe, with Bosnia and Herzegovina having only 1,765 asylum applicants, and Montenegro slightly over 500.