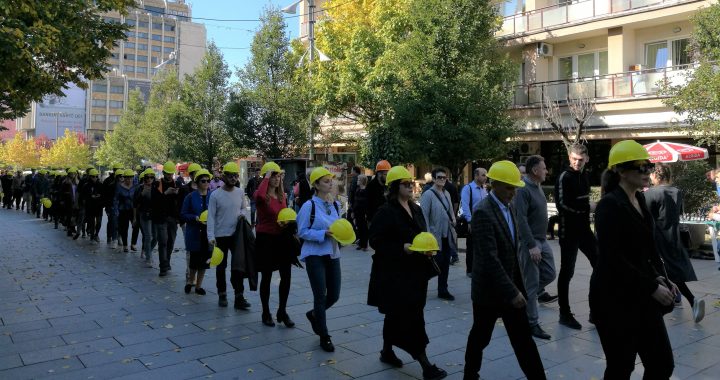 With 93 yellow hard hats, each representing a lost life, protesters in Prishtina demanded a halt to workplace deaths in Kosovo and better conditions for workers overall.

Bearing numbered safety helmets, a few dozen protesters marched through Mother Teresa Boulevard to the government building in Prishtina, demanding improved working conditions on construction sites, and accountability for the 93 recorded cases of workplace deaths in the country in the past five years.

Called “The buildings are yours, the lives are ours,” the protest concluded with participants placing all the helmets on the guard rails that surround the government building.

“And if the government, or somebody else, decides to remove the helmets without our permission, they can be considered collaborators with the people responsible for these cases,” said Kushtrim Mehmeti, organizer of the protest, who emphasized that helmets will be added to for every future case.

Mehmeti, who is part of Beyond the Wall, an NGO based in Skenderaj that focuses on civic activism, said that the protest aims to convey the miserable conditions that workers deal with in Kosovo, and voice that there has been no progress towards solving the problem.

“As long as there is no result, something is going wrong. I request all people that are responsible for these deaths that they do something,” he said. “We’re in October, and 18 individuals have died [this year], and by December we may have [a statistic of] two deaths per month. I do not know how 2019 will be.”

He said that one of the most noteworthy shortcomings is the low number of inspectors who evaluate whether workplace conditions are up to par. According to Mehmeti, inspectors also often fall prey to bribery, which hinders improvement.

“One of the most concerning things is that the number of inspectors is 42. With 42 inspectors, they aim to cover the whole of Kosovo. We demand that there are more inspectors before 2019, and have more security for inspectors when they go and do their job, they shouldn’t be bought with a lunch, or a hamburger,” Mehmeti said.

Jusuf Azemi, head of Independent Syndicate of the Private Sector of Kosovo, said that country has had the highest number of workplace deaths in the region in the past years.

“Every year we have a tremendously high growth [in workplace deaths]. Most of them didn’t even have work contracts, and as such they have no institutional support,” he said.

Azemi said that, despite the presence of the Law on Labor in Kosovo, it is oftentimes not respected, and that institutions fail to open their ears to the advice and suggestions of the syndicates.

“We have said it before, our workers are being treated like slaves. I am convinced that in other countries in the region or elsewhere, if they had this figure, the minister [of labor] and maybe even the prime minister would recognize that these are human lives and we are losing them because we are not careful,” he said.

He said that change is only possibly through direct actions from responsible institutions, and that there are few positive signs of change at the moment.

“We receive the cases, we talk about it for a few days and we forget them. The worst is that many of them are breadwinners, and when their life ends, their families in a way also lose the right for social assistance, cases happen and we do nothing about them,” he said.

“We have followed these cases, and if they are won in court, they only got a symbolic sum of support and everything ends with that.”

Mehmeti invited protestors to join future gatherings in support of workers in Kosovo, saying that they will be more assertive.

“I say that this is a war situation, 18 people die in 10 months, something is not going well, I do not know why they consider this normal, and it is an extraordinary situation,” he said. I do not think that our future actions will be as peaceful as the one today, they will become rougher, and we ask that our lives are protected.”