Violations of workers’ rights in Kosovo are commonplace, and unions are powerless and politically-influenced. We need to establish new forms of labor organization–grassroots and democratic.

It is a widely accepted fact that Kosovo is one of the most impoverished countries in Europe. With the unemployment rate at 26 per cent (although other sources like the World Bank would suggest it to be between 30 – 35 per cent), youth unemployment at 61 per cent, and a frightening minimum wage (130 euros for workers under 35 years old; 170 euros for those above 35), a third of the population lives in poverty.

Thus, the 1st of May is always a sight to behold in Prishtina. Thousands upon thousands of people, old and young, workers and unemployed, students, farmers and the landless go out of their homes and, in what looks like an invasion, pour in from all sides of the city and surrounding areas into the well-known Germia park and… celebrate?!

The meaning of the particular tradition originating from Yugoslav times as a celebration of (state) socialism, and the meaning of the 1st of May in general, has faded into obscurity in the minds of many of those lounging in the park. As one unemployed youngster put it, “Vallahi, I think it’s ‘the day of workers,’ but I came here to have fun.”

With 18 years of the neoliberal project, constant ideological brainwashing by the media and politicians about the sanctity of private property, appeals to individual success, and the demonization of everything that resembles collectivity or socialism as, at best, inefficient and old, and at worst, as Yugoslav (read: pro Serb), it is not so surprising that Labor Day, and with it labor rights, reside now in the realm of oblivion.

But do not despair. There was some labor-focused activity for the 1st of May: last year about 25 people gathered in front of the government to protest for workers’ rights and  against unemployment, in contrast to  2015, when a sole person stood at the same place with a banner reading “I want work.”  The only “significant” protests were those of  2010 and 2013 , both organized by the Labor Union Confederation, BSPK, which gathered about 100 people each year.

The reason for the low turnout at the Labor Union protests can be traced back to serious structural problems within the unions as well as a general ideological shift towards some schizophrenic version of neoliberalism.  Even though at first glance to a layperson this might be seen as a novel attempt by the weak unions to factorize themselves and raise awareness about labor issues, the truth about these unions is a much more sinister reality of power struggle, nepotism, incompetence, shady deals with economic and political elites, and sometimes sheer absurdity.

Often when thinking of “a worker,” images of a rugged, masculine factory worker dressed in overalls and laboring non-stop on the factory floor come to mind. Though certainly there are thousands of workers, both women and men, toiling in factories in abhorring conditions in enormous danger to their physical and mental health–for example the flotation unit in the Trepca mine where workers work in led-filled air without breathing masks, or the furnaces of Ferronikeli with worn-out heat resistant clothes)–they are not the whole story.

Kosovo’s economy is predominantly made of service and trade sectors (wholesale, business services, accommodation and food, and so forth), leaving manufacturing and construction way behind. Thus it is accurate to think (in over-simplistic terms) of workers today swarming pop-up-faster-than-mushrooms call-centers, supermarket checkouts, storage and sorting facilities as waitresses, cleaners, security guards, and so forth.

In addition, with the ever-growing neoliberal trend of outsourcing, self-employment, service contracts, internships, freelance and project-based work, a large percentage of the labor force in Kosovo finds itself in a precarious position. With no regular pay, paid vacation, stable work hours or work, the growing army of translators, designers, programmers, NGO employees, social and cultural workers and others find themselves in a real struggle to secure a stable future. 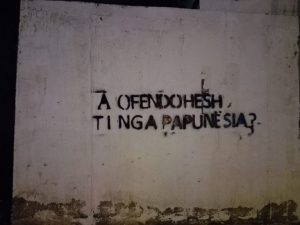 Grafitti in Prishtina on the eve of May 1 “Are you offended by unemployment?” | Photo: Solidariteti Klasor blog.

Depending on the sector, in which some of the following are the norm, employees often work without (or with fictional) contracts, working-hours are a mere vague guideline, long-term contracts a dream, livable and regular wages a joke, weekends, fully paid vacation and sick leave a luxury, workplace safety unheard of, unlawful firing a regularity, and workplace organizing an absurdity.

The situation of women is the most precarious. In addition to being exploited at home, they face gendered jobs and discrimination at work because they “might” ask for maternity leave. After women workers overcome patriarchy at home, and state and capital control over their uteri, the system throws yet another hurdle at them: sexual harassment.

The data about all these violations is hard to come by, and research is superficial and rare. But a simple a small-talk with a cashier in a hypermarket, a taxi driver, a call-center worker, a cleaner, a technical worker, a builder – basically anyone – is enough for one to understand the working conditions in Kosovo. In the last seven years alone, around 70 people reportedly died in the workplace (six of them since the beginning of this year), and around 550 were injured in work-related “accidents.” A majority of these incidents happened in the construction sector, a highly corrupt and mafia controlled sector.

Kosovo unions are organized into sectoral federations, which make up the national Confederation of Unions, required by law to be present in some important decision-making bodies such as the social-economic council, in drafting relevant laws and regulations, singing collective agreements, et cetera. As a result, federations, and especially the Confederation, have a great influence on some of the most important political, economic and social issues.

Labor unions in Kosovo have shown time and again that they have difficulty organizing collective actions.

Thus it’s no surprise that there is an internal power-struggle for union control, especially between leaders backed by political parties. That is not to say that the unions come directly under the control of any political party – unions have agendas of their own, but they operate on an “I scratch your back, you scratch mine” sort of relationship that is based on personal interests of the leadership. For example, the current head of the BSPK Confederation, Haxhi Arifi, was strongly backed by the government (though majority of sections are against his election) and in return the Confederation sided with the government on various labor issues such as denying the payment for workers or on the process of privatization itself.

Beyond political and ideological problems, unions have another crucial problem: the lack of actual power. “An injury to one is an injury to all,” goes a historic Industrial Workers of the World slogan, emphasizing the solidarity and collectivity of the working class. In any case, the true strength of any particular labor union and syndicate lies in the ability to call upon workers and organize a collective action against the employer, with strikes being the most notable instrument. Labor unions in Kosovo have shown time and again that they have difficulty organizing collective actions.

Kosovo unions mostly rely on their negotiation power, or more precisely, their power to bluff their way into an agreement. In some cases, the unions rely on pressure from the international community or certain political groups to push their agendas forward. With the exception of the teachers’ union, no other union federation has shown potential to organize a strike. The Confederation, as the highest representative of workers, has never managed to organize a strike or a collective action. Thus in post-war Kosovo, not a  single general strike has been called.

The issue of workers has shifted from the rights of the working class, to 'employee's rights.’ Thus workers’ organizations today have lost their true purpose and power.

The unions in general tend to be highly undemocratic institutions in which workers are only able to vote once in three or four years for the union leadership. Meanwhile, they are completely detached from any form of decisionmaking. Unions mostly operate as bureaucratic “offices for complaints” for the individual workers; they are often based in an office far from the workplace -and are  governed through top-down hierarchical structures, while membership fees move from bottom-up. Far from historical unions (called syndicates), which represented a political and economic force of the working class, unions now represent bodies focused on short-term economic gains.

Declaring themselves “apolitical,” they represent the capitalist rationale of individualizing the struggle and turning it into a technocratic problem. The irony is that for an “apolitical” entity, party politics are rooted into every single pore of the labor unions’ work. No wonder then that most of the workers in Kosovo frown upon the idea of joining unions.

What is needed is a radical rethinking of unions and their role within society. With the shift towards identity politics and the prevalence of representative democracy, the issue of workers has shifted from the rights of the working class, to ’employee’s rights.’ Thus workers’ organizations today have lost their true purpose and power (we can thank social democracies for this).

We need new forms of labor organizations, ones that are based in grassroots solidarity networks, heterogeneous, horizontal/democratic, politically active, involved in different social movements from women’s rights to LGBT rights, and that fight for short term economic interests and long term political goals. We, the workers, need to disregard labor unions and form our own worker organizations. We need to move away from labor unionism and into new forms of syndicalism. Only then can we see workers becoming a subject in their own right having power to confront the challenges facing labor today. Only then could we see the true meaning of the “working class.”

by Sarah Hehir
Next: Opinion

Order vs. Justice in the Balkans