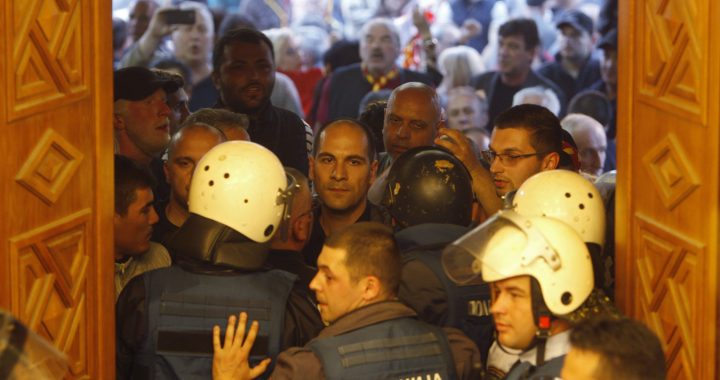 Order vs. Justice in the Balkans

The attack on the Macedonian parliament by thugs is symbolic of the rise of the right worldwide and a result of decades of sacrificing justice for the sake of order in the Balkans.

There are not many Germans living today who would be conscious enough to remember Germany of the early 1930s. But had they been exposed to coverage of the events in the Macedonian parliament last week, memories of “brownshirts” – Nazi stormtroopers disciplining political behavior – would immediately come up. Fascism is on the rise, or perhaps the “winds of change” in the international political scene are just removing the dust that has been covering fascism in the region and elsewhere for some time now. To say that the Macedonian MPs (both Macedonian socialists and Albanians) were attacked, as many in the media and political circles did, would be quite apologetic to the fascist attackers. Throwing tomahawkish objects aiming at MPs’ foreheads is an assassination attempt, not a simple attack. Despite the bloodshed, no one died. But this may be just the start.

When faced with a moral choice between order and justice, it is not difficult to decide – generally speaking, going for both would probably strike the right balance in any social setting. But in reality, one is often compelled to choose between the two. After the disorder of the 1990s, order has been chosen over justice for the Balkans. It was thought that justice would follow order, but justice was soon swept under the rug. To be sure, justice has been part of the international and local discourses throughout these years, and continues uninterrupted to this day. Justice was simply too important to not talk about. But when it came to practice, order was chosen over justice. I presume that the justice that would follow–partly by prosecuting the ruling criminal and wealth-accumulating elites, who served as order-keeping machines for the international actors present in the region–was thought to be a game too risky to play.

Let us not kid ourselves. I would challenge anybody who can find a former Yugoslav state in which the ruling elite in 2017 is even slightly different from the war-mongering ruling elite of the 1990s. From Vucic in Serbia, Izetbegovic in Bosnia (and the leaders in its sub-states), to Thaci in Kosovo, and Gruevski and others in Macedonia. For the sake of accuracy, there is one main difference between the two periods. At present, all of the ruling elites exert immense control over public opinion through the national media they have captured, and have accumulated wealth to disproportional extents through the transfer of national wealth to private enterprise. Employment has become a private party enterprise and not a national goal. Anybody characterizing this sort of elite as an outcome of free and fair elections, even when elections are “free and fair,” would not be paying due respect to proper democracy. The usual claims made by many international actors that it is the people who are democratically electing this kind of leadership are simply cynical excuses for the prevailing policy of order over justice.

What happened in the Macedonian parliament is certainly not only a matter of the Macedonian national context. It is of course also not only a matter of the regional Balkan context. It goes even wider, covering the political changes in Europe and the United States, where right-wing extremist political insurgencies are taking over institutions and soon will become mainstream political bodies. Four years ago, when Merkel was set to win in Germany, one worried about her being too right-wing of a person to be happy about her election. The same Merkel and her same neo-liberal economic advising team in today’s international political scene, where the mainstream is constantly moving to the right, soon might strike as socialist. The neo-liberal economic and finance brain behind Merkel, Wolfgang Schaeuble stated recently in Washington that “Narrowing the gap between rich and poor is key to avoiding a destructive rise in populism.” No joke!

Unfortunately, in the recent debates about the future of the Balkans, there were two options on the table. One was the option of disorder and “national justice,” portrayed best in a recent Foreign Affairs article calling for the creation of national states – based largely on a misinterpretation of the facts on the ground. The author of this piece would most likely find the recent crisis in Macedonia as one between ethnicities, and would probably miss the point that the Macedonian socialists were beaten up as much as the Albanian MPs, and that the fascist attacks did not come out of Albanians wanting anything more than what is stated in the Ohrid Agreement. The other option, which was offered as a response to the first, unfortunately ended up in proposing the preservation and protection of the current order; falling in the multi-ethnic trap and shoving off the fundamental economic structural problems that exist in the present order.

Calls for order can be found on three levels in the Balkans: amongst the international circles, mostly those European, present in the Balkans; the national ruling elites; and, unfortunately, the intellectual class. But there is a reason for this agreement between these three sectors, if you will. For the international actors, the present order preserves the so deeply desired stability. For the national ruling elites, the present order preserves their wealth and power. And for the intellectual class, it preserves their privileged position in society. Justice is something to be talked about, because it is simply too important not to be talking about it.

What is the justice that one should seek if order, but a just order, is to be maintained in the Balkans? Of course, the list is long, but one can start with the fundamentals. First, one should not expect the international circles to stop supporting the unjust ruling elites that serve as their machinery for stability (even if the creation of national states would suddenly be supported). Second, one should not expect a smooth and non-violent transfer of power by the present national elites (even in a hypothetical context of national states). Third, one should, however, expect the privileged intellectual class to start sacrificing their privileged, often undeserved, position in society, be it in a national or multi-ethnic context. This can be done by a serious discussion that needs to start about fundamental changes in the structure of the region’s economies – a structure that benefited mainly the above-mentioned three circles region-wide.

The post-1990s economic structure implemented throughout the region with unchecked markets and trade promised a liberal rule in which concern with the community (ethnicity or nation) would be replaced by a concern with the individual. This did not happen. What happened is that wealth became an individual goal reachable only through the ruling politicians and their pawns. Both production and the welfare states (even the examples of current European states) were ironically dubbed as archaic and reminiscent of the past. In other words, the maxim of free market on the one hand, but a very restricted labor market on the other, became the region’s unchallenged religion.

Feelings of inter-ethnic injustices do exist, and such feelings are warranted given the failed post-war settlements of clearer identification between victims and culprits in regional but also in national/state contexts. Despite this, and the evident divisions between nations/ethnicities, Gruevski, Vucic, Thaci, Rama, and Djukanovic have much more in common than they do with the respective societies they represent. That is, their ability to amass an incredible amount power to control political and economic behavior, mostly through their direct and indirect control and possession of wealth through private enterprises. Fear of losing these benefits is another feature common among them.  To conceal these similarities, they throw nationalist dust around everybody else, so that the problem becomes again the ethnic structure, and not the economic structure of the region that they exploited. Serbia provokes Kosovo with “Russian” trains and what not, Thaci and Rama provoke the region with Greater Albania, Gruevski provokes others with his “brownshirts” – these exemplify their readiness to strike another war to again become the international community’s post-war mediators of peace, and thus maintain same old positions of power and wealth.

Changing this is not easy, and it should begin with discussion and then the possible avenues to fundamentally change the actual structure of the economy. While there is space for a ‘vibrant’ private sector in the region, its limits should be recognized, and the present law of wealth gravity that pulls towards the ruling elites should be challenged.

Mobilization of people to produce products and redistribute wealth should replace the current mobilization of “brownshirts” ready to storm into any place when the buttons of fascism are pressed. This will require a direct confrontation with those holding power in the current political structure for more than two decades now. One can take this either as a choice or as a necessity.

Either option would determine the course of events in the region. Unlike in the beginning of the 2000s, Europe of 2017 is found immersed into its own immediate problems and seems to be too tired and worn out to deal with the Balkans. Stakes are too high to wait and see what Europe will do. It should be clear to any conscious mind that even membership in the EU will not solve the deep structural problems of the region, as some of them are inherent in Europe itself.