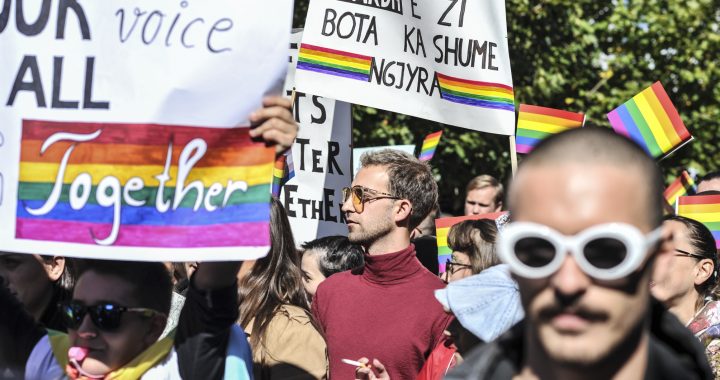 A sign reads: Don't see only black and white, the world has a lot of colors.

LGBTI activists look back on 2017

Throughout 2017, LGBTI activist groups attempted to bridge the gaps in Kosovo’s legal framework when it comes to issues affecting the community. The Center for Social Group Development, CSGD, presented these efforts in a new report published today in Prishtina.

One issue highlighted in the report, titled “The LGBTI community and their rights in Kosovo,” regards the Law on Civil Status.

“The Law on Civil Status lacks sub-legal provisioning for the process of gender reassignment covering modification of data on public registers and documents,” the report states. CSDG has been coordinating with the Ministry of Interior and civil registry agency to draft an administrative action that will address this issue.

The most important legal gap, Kosovo Ombudsperson Hilmi Jashari said at the presentation of the report on Wednesday, is in the Kosovo Criminal Code, KCC.

CSGD participated in the working group for the revision of the Criminal Code and recommended to change Article 74, which if ratified, will include hate crimes based on sexual and gender identity.

However, the working group dismissed CSGD’s proposals to include sexual and gender identity explicitly in Article 147–which defines incitement of national, racial, religious or ethnic hatred, discord or intolerance–because “it’s not explicitly stated as such in any Council of Europe country.” .

Riccardo Serri, the EU Office in Kosovo’s head of section for political, economic, and European integration, spoke about the oft-heard comment that Kosovo has a good legal framework but lacks adequate implementation. However, he emphasized,  Kosovo’s legal framework was nevertheless a great achievement.

“There are still more than 80 countries in the world in which same sex relations are criminalized, and in some countries, relationships can be punished with the death penalty,” he said, referring to research on world and European divides on LGBTI rights.

“Having a good legislative framework in place is very positive. We have worked with you to further improve the framework,” he added.

Oliver Mains, officer at the US embassy, echoed Serri.

“Unfortunately as we know despite the strong legal framework… many still live in fear and isolation, and remain closeted due to fear of persecution from friends and families,” he said. He emphasized the need for improved visibility of the LGBTI community, improvements to healthcare services, and ending violence against the community.

Cooperation between LGBTI organizations and Kosovo Police was assessed as positive in 2017. The report authors also noted improved cooperation with the Ombudsperson Institution.

There were no new LGBTI-related court cases in 2017; however, the report notes, there is “not yet a tracking system for the data related to the number of cases reported to the police and prosecution and those handled by the courts.”

“Media was often in service of strengthening negative perceptions and social rejection of the LGBTI community,” the report states.

Still, according to the report, increased visibility of the LGBTI community has led to a more positive manner of reporting. According to CSGD’s media monitoring from January-October 2017, there were 258 reports on LGBTI issues published online, of which 149 had a positive approach, 68 neutral, and 39 negative.

The report also criticizes Assembly members for failing to engage in open advocacy for LGBTI rights. CSGD praised Kosovo President Hashim Thaci’s appearance at Kosovo’s first pride parade, saying that it was “of a significant importance given the high degree of social resistance that commonly results in discrimination and violence against the LGBTI community in Kosovo.”

However, Rina Braimi from the Center for Equality and Liberty, CEL, emphasized at the panel on Wednesday that President Thaci’s participation at the parade was not enough to shift the overall mentality of people in Kosovo. She spoke about a recent incident in Ferizaj, where CEL was meant to give a presentation on the LGBTI community at a local school, but were obstructed by the school director.

“Even after the parade and the participation of the President, we still had this case in which a school director said offensive words to us… This is very worrying and we need to do a lot more to change this,” she said.