The landscape of Dardan’s daydreams

Conceptual and visual artist Dardan Zhegrova presents his new exhibition, “The anchor of my own landscape.”

It moves us when an artist can transform the banal aspects of everyday life into the remarkable, and revert the truly life changing to the unremarkable.

Inspired by artists that play with reality and emotion, Dardan Zhegrova’s new exhibition, opening Friday in Prishtina, explores how humans cope with their daily lives by clinging to the imaginary.

Sitting in the corner of a cafe next to LambdaLambdaLambda Gallery, Zhegrova talked to Prishtina Insight about the relationships and experiences that influenced the creation of “The anchor of my own landscape.”

“You can look through all my work and see the effect that someone has had on me, or the effect I’ve had on them,” Zhegrova said, examining one of his prototype pieces for the upcoming show, a large swathe of pink fabric he draped across the table.

We use daydreaming as a way to stay sane.

“Lately, I’ve been writing down and drawing the daydreams I’ve been having, and printing them on these fabrics as well. It’s helping me understand how, actually, we use daydreaming as a way to stay sane.”

Zhegrova was one of the first artists to be showcased at LambdaLambdaLambda, the international gallery for contemporary art in Prishtina, opened in 2015 by Isabella Ritter and Katharina Schendl.

“The anchor of my own landscape” will push the boundaries of Zhegrova’s oft-used artistic mediums, combining his signature work using fabric and sewing with drawings, illustrations and engraved glass work.

“Our daydreams are a mechanism that we use to protect ourselves, particularly when we miss or lack something in our lives. We have a tendency to fixate on something that’s imaginary, but that imaginary thing is what helps us stay grounded day to day.”

For his new pieces, Zhegrova has been researching the power of his own daydreams by sketching the conversations he has with himself. 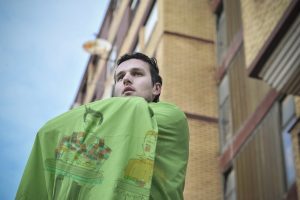 Rather than represent these feelings through the poetry seen embedded in his previous art installations, he is learning how to translate the poetic vibe of his older work through the pieces themselves instead.

“I wanted to challenge myself by channelling my feelings through different media. What’s most important to me is to follow the idea, and not the form,” he explained. “The emotion or feeling that I want to convey will dictate what tools I use. Glass feels like the right medium to etch my daydreams onto.”

While this new exhibition will not showcase his poetry, Zhegrova is keeping his eye fixed on developing this body of work for other audiences. He will be reading some of his poems in a live performance at the Kunstwerk Institute for Contemporary Art in Berlin this month under his pseudonym Lucky Pierre.

What’s most important to me is to follow the idea, and not the form.

Though he studied journalism and worked as a journalist after finishing high school, Zhegrova always found himself drawn to art and culture, and continued experimenting with poetry, photography, drawing and filmmaking both through journalism and in his spare time. Zhegrova had been taking part in numerous collaborative projects with friends before his first solo exhibition at LambdaLambdaLambda in 2015.

“Art is about having what I don’t have, creating situations and creating worlds that will never exist in reality,” he said. “When I first started making art, this was completely spontaneous and natural, but now I’m starting to understand what I’m really trying to do.”

His artistic focus on personal relationships is also seen in his enthusiasm for collaborative work.

“Working with other people means you develop and push each other. I like that when two minds combine it raises the possibilities of what can happen,” he said. In 2016, Zhegrova wrote one of his poems for filmmaker Samuel Weniger, who he met while working in Switzerland. They decided to visualise its message, turning it into a short film together, I kissed your kiss on you girlfriend’s cheek, it was still wet.

“It’s something special when you like working with someone on an artistic and a professional level, and we’re planning on doing it again very soon,” he said.

Poetry has found its way not only into his film work, but also physically sewn into his installations.

Some of Zhegrova’s most striking work with fabric has been his series of installations that combine poetry and sculpture inspired by voodoo dolls, a pop culture reference to the voudon effigies historically created to help manifest something the maker yearns for. There are seven so far, each piece a personal love story represented through life-size dolls combined with audio elements, which are reactions to intimate relationships he’s encountered over the last few years.

“My poems are inside the dolls. They are all interactive installations, you can lay your head on their chests and their hearts talk to you.”

The materials Dardan has used for his installations have been inspired by his mother, a tailor, and he has worked with her from the beginning to make his art using different fabrics. 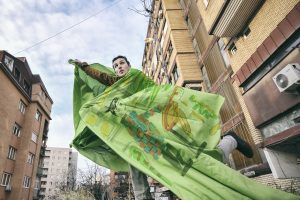 “The two of us don’t have the closest relationship, but this is why working together is so important for us. It’s become the form of communication that we never had before,” he said. “My work with fabric and material with my mother is all the more important because it’s not just technical. It gives a little more intimacy to the process, and this makes it very powerful for me.”

If I had to put into one phrase what I’ve been doing, it’s representing love.

“If I had to put into one phrase what I’ve been doing, it’s representing love. Not in a traditional sense, but rather exploring the idea of a relationship between two people, how you and I feel towards other human beings, these essential elements of personal connection. It’s not necessarily romantic, although it can be.”

It’s not just people, but places that give Zhegrova the opportunity to evolve. Despite his previous hesitation taking residencies abroad, Zhegrova could not resist the invitation from other international galleries to develop his work somewhere new.

“By just staying in Prishtina, there’s a low chance of finding new experiences. Working in different places, I think the geographical aspect, new people and cultures and the energy of the place you’re in influences the work that you produce.”

“Even though being able to make art is sometimes perceived to be a luxury, I still think it’s essential to communicate ideas through art. It’s a chance to play with different ideas, and show that our daydreams and emotions are not isolated or static but something that everyone feels,” he explained.

“This is why I love art,” said Zhegrova. “It gives me a chance to put the spotlight on the little things, to show their importance and their influence on us.”

“The anchor of my own landscape” opens on February 9 at Prishtina’s LambdaLambdaLambda Gallery.  Angelo Plessas will perform an opening ritual titled “Sisterhood and Brotherhood Talisman” at 6:00 pm. The exhibition will be on view until April 7th every Thursday, Friday, and Saturday from 2:00 – 6:00 pm.

LGBTI activists look back on 2017

An overview of Krypometer’s highlights of 2017