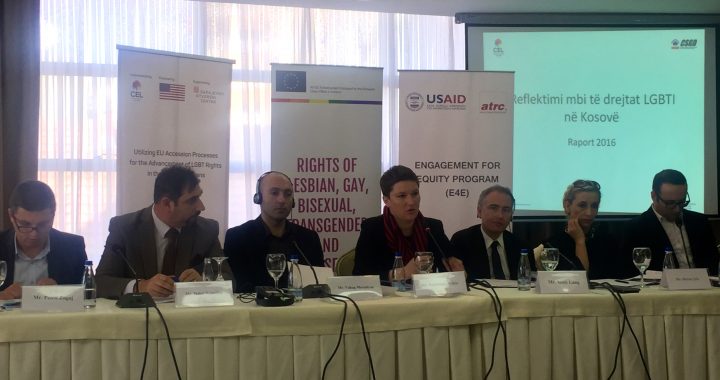 “When it comes to violations of rights of people related to their sexual identity, when a case gets to the prosecution, it is classified differently–not as a hate crime, but as physical assault,” said Rajmonda Sylbije from the Center for Equality and Liberty, CEL, at the launch of the report “Reflections on LGBTI Rights in Kosovo” on Tuesday.

“Offenses are not being classified properly,” Sylbije insisted, alluding to a problem in gathering data on harassment faced by LGBTI community members.

The report, co-authored by CEL and the Center for Social Group Development, CSGD, assesses the legal, political, and educational issues Kosovo’s LGBTI community faced in 2016.

Because victims of hate crimes often hesitate to report to local police, CEL introduced a “Report” campaign, encouraging victims to report directly to them and offering legal and psychological support.

Six cases were reported to CEL in 2016, two of which resulted in victims receiving assistance to access an LGBTI shelter in Tirana, Albania. Four of the victims asked for information on seeking asylum.

Still, there maintains a high reluctance for citizens to report LGBTI hate crimes to the police.

“All [six] victims have refused to report their cases to the police, as it usually occurs that the perpetrators are their families,” the report states.

Only four cases of hate crimes against LGBTI community members were reported to the Kosovo Police in 2016, though “because of the lack of a tracking mechanism, there is an inconsistency of data on the number of cases reported to the police.”

However, the authors said, cooperation with the Police and LGBTI organizations improved last year.

“There has been an increase of police officers who work on these cases closely with the community. The Kosovo Academy for Public Safety has worked a strategy on protection of these communities into its curriculum,” said Arber Nuhiu, CSGD Executive Director.

The report emphasizes that the Laws on Protection from Discrimination and Gender Equality provide high guarantees from sexual orientation and gender-based discrimination in public and private life.

Yet the authors argue that the legal framework is incomplete.

For example, there is a contradiction between the Kosovo Constitution, which declares that “based on free will, everyone enjoys the right to marry,” and the Kosovo Family Law, which defines marriage as between a man and a woman. Additionally, the Law on Civil Status lacks provisions for gender reassignment.

“Despite the advanced legal framework with some noted flaws… the main hurdle [is] the implementation of these acts.”

Surveys cited in the report found prosecutors to be “the greatest opposition to LGBTI rights” amongst other public servant sectors.

There was a visible improvement in media coverage during 2016, with less offensive and abusive language used in reporting on LGBTI issues. Overall though, the report maintains, journalists have “shallow and inadequate knowledge of LGBTI issues.” The report also criticizes media websites for failing to moderate online comments inciting hatred and violence towards the LGBTI community.

Although Kosovo politicians make positive statements on LGBTI issues during visits of foreign dignitaries, denigrating comments are made both publicly and, as leaked wiretaps have shown, privately to the domestic audience, unveiling “the superficiality of the institutional commitment towards the values which they adopt in law.”
“Reflections on LGBTI Rights in Kosovo” was supported by the US Embassy, the EU, and Sarajevski Otvoreni Centar.