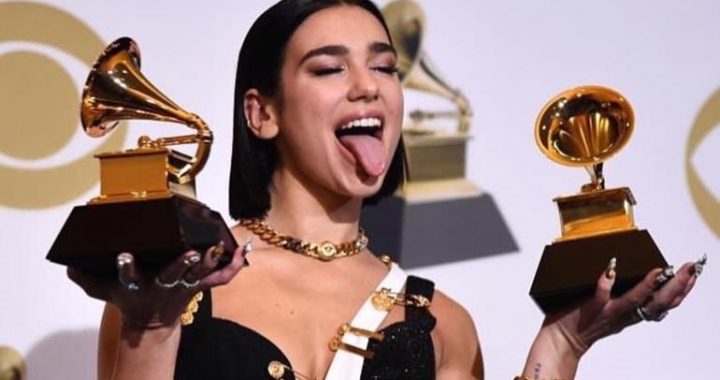 Dua Lipa comes out on top at Grammys

Kosovo-British musician Dua Lipa performed and won two awards at the 61st edition of the Grammy Awards on Sunday, celebrating the number of women nominated and winning alongside her.

Lipa, 23, took home two awards on Sunday, the first for ‘Best New Artist’ for her 2017 single ‘New Rules’ and the second for her single ‘Electricity’ which won ‘Best Dance Recording.’

“Thank you so much, I meant to begin by saying how honoured I am to be nominated alongside so many incredible female artists,” said Lipa, who was put forward for the category celebrating 2017 and 2018’s biggest breakout musicians alongside five other women artists.

“Anyone that hasn’t realized how special they are to have a different story, a different background, a name that honours their roots, because they just want to be normal, whatever the hell that means, just know that no matter where you’re from, your background, what you believe in, never let that get in the way of you and your dreams,” said Lipa as she accepted her award.

In 2018, Lipa founded and organized the Sunny Hill Festival, a three-day music event held in the Germia park close to Prishtina, hosting a mixture of celebrated local and international artists with Lipa as a headline act, as well as Martin Garrix and Action Bronson.

Another breakout music artist with Albanian roots, Bebe Rexha, was nominated for two Grammys on Sunday, the first in the ‘Best New Artist’ category beside Lipa and the second in the ‘Country Duo/Group Performance’ category for her collaboration with Florida Georgia Line, ‘Meant to Be.’

“So many women!” Lipa continued. “I guess we really stepped it up this year.”

According to Rolling Stone, this comment on stage was a direct rebuttal to remarks made by The Recording Academy President Neil Portnow, former head of the organization that runs the Grammys, who said last year that to attain the prominence and equal representation, women in the music business would need to “step up.”

Lipa also commented that the release of a new album is on its way, but without revealing any further details. “You’ll be hearing from me soon,” she said.

Correction:  A previous version of this article introduced Dua Lipa as “Prishtina-born.”  This has been changed to “Kosovo-British musician.”