From garage to gold

A trio of sisters from a village near Gjilan have dominated the table tennis world in Kosovo since 2006, and humble beginnings in their parents’ parking garage never stood in their way.

Usually, the garage of a house is built for storage, everything from car parking, coal and wood, to keeping tools hanging on its walls.

However, the garage of a house belonging to Skender Zeqiri, in the village of Pasjak, has a different story.

The three daughters of the family, table tennis champions Egzona, Linda and Hanife, train and prepare for competitions in the garage below the house where they live, at least for the time being.

The Table Tennis Federation of Kosovo lists Linda at the top of the women’s senior league, while Hanife is listed as second.

Their coach, Jeton Azizi, explained the exercise regime that the Zeqiri sisters go through. 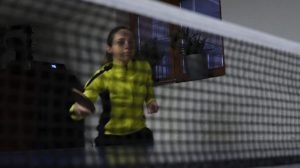 Training in the garage for the Zeqiri sisters is a routine. | Photo: BIRN.

“It was extremely difficult, but the great motivation coming from the girls goes beyond all, and in addition to sacrifices and difficult conditions, we managed to organize their training,” said Azizi. “I have given my contribution in terms of technical and tactical work, while Linda has never stopped going, and has made all the necessary preparation in regard to stretching and exercise.”

The eldest sister, Egzona, recalled when she first began training, again in another garage, with her first coach, Naser Hasani.

“Initially, it was my father’s idea to start with the table tennis. We decided to go and try it out to see whether we liked it or not,” she said. “We tested it out for one week, and we liked it, so we continued with it almost every day even though our home was located a bit far from the garage. The conditions were not adequate, there was a table to play on, but it was a narrow one.”

The 27-year-old said that inadequate training conditions motivated them to work hard and prepare in a better environment, a goal that Linda, the current Kosovo champion, managed to achieve.

“Exercising under these conditions motivated us to work towards and reach victories, as well as to create a better environment for us, at least for Linda, who has gone to Prishtina, continued her studies and trains on a table that is adequate for the sport,” said Egzona.

Azizi said that his work with the girls is done on a voluntary basis, without a single penny of compensation.

“Having in mind the great motivation of this family, especially the motivation of Linda’s father, to support his daughter on her path of winning titles, this has given me the motivation and I volunteered to be witness to Linda’s growing success,” he continued. “Initially, it was a challenge, then a privilege and a pleasure at the same time because training an entire family and having three champions from that family, this has been an extraordinary experience.” 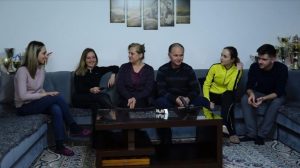 The Zeqiri family have continually supported the three women in the pursuit of sporting success. | Photo: BIRN.

Linda explained that as a table tennis player in Kosovo, it is not possible to cover even the smallest financial training requirements, and the sisters rely on their father, a police officer, to cover the costs.

“Financially, we haven’t had any funding even for our basic needs, such as equipment for table tennis,” she said. “You wouldn’t even consider trying to live off of it.”

Azizi explained the difference between training in a proper table tennis hall for other athletes, and in the family’s garage for the sisters.

According to Azizi, access to facilities like this is essential, but there are other problems that come out of small training areas as well.

“The garage is missing a suitable gym, then there is the height, the length and width of the hall. All these standards are required in games where the competition is of an international level,” he said. “We have gone so far on motivation alone, and you are witness to the conditions and circumstances we are training in.” 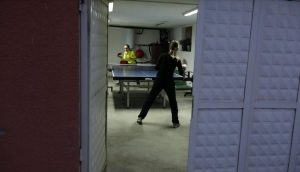 Hanife, the youngest sister in the Zeqiri family, began playing in 2010 at the age of 13, and said that Egzona and Linda inspired her to play, too.

Her main goal was to reach the final against the best table tennis player in Kosovo, which is her sister Linda, a goal that she achieved in 2018.

She lost that match, but for her and her family that match was a win, as their only goal was to bring home one more title.

“In fact, I consider my sister’s victory as a victory for myself because, for us, it was always of high importance to bring the cup home, no matter who it belongs to,” she said with a smile.

Named best table tennis player in Kosovo three times, Linda said that she was lucky when, in 2006, she was selected to represent Kosovo in Bratislava, the capital of Slovakia, where she won seven consecutive games.

Linda has won every title she worked towards since 2006, but according to her, the most special title she won was the one against her sister Hanife in 2018.

In 2010, Linda moved to Prishtina to go to university, as well as to train with her coach Samir Ajeti, in far better conditions than her sisters.

“I have been training in Prishtina since 2010 at the Palace of Youth and Sports,” she said. “Nowadays, we do not train together but we play in the same team.”

After winning everything that can be won Kosovo’s table tennis world, despite the difficult conditions that made such success that much harder to reach, Linda has a message for younger generations. 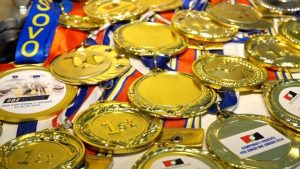 “I would share one suggestion with the younger generation, especially to women, asking them to take up exercise. Not just table tennis, but whatever sport they like,” said Linda. “Physical activity gets kids more socialized, and improves their health at the same time.”

Linda said that even if she does not continue playing table tennis, her legacy as a table tennis champion will, and the future she has in store goes beyond Kosovo’s borders.

“The final goal is to achieve international medals, if not as players then at least as trainers with the younger generation,” she said.

Dua Lipa comes out on top at Grammys