The eighth edition of the HardhFest festival has attracted more visitors than ever to a joyful celebration of the rich food and drink traditions of this part of Kosovo.

While pure Rahovec brandy flowed from a copper cauldron, hundreds of locals and tourists celebrated the Rahovec grape festival in the west of Kosovo on a meadow among the vineyards.

As darkness fell on the land, local winemaker Gazmend Daka lit the fire with the wood on which the grapes had ripened. In a classic cauldron placed in a corner, the winemaker explained the process of making the local Rahovecian drink.

After a simple distillation process, visitors who had come to Rahovec to enjoy the grape festival, HardhFest, had the opportunity to see the results of Rahovec’s earthy treasure. 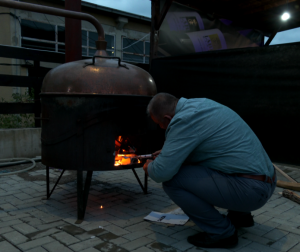 A grape harvest festival has been held in Rahovec since 2001, the only such agricultural festival in Kosovo. The celebration then turned into a proper festival, called HardhFest, organized by local organizations, to attract more visitors.

“This is the process of roasting or distilling with the classic method still done in Rahovec. This means copper cauldrons in which the roasting takes place … because copper is more resistant to high temperatures and is cleaner, so it does not conduct other parts of metals,” Daka told Prishtina Insight.

Although Daka himself has only a few vineyards, he obtains enough grapes for production from other Rahovec farmers. Besides having a business with grapes, the most important thing for him is inheriting this culture from his ancestors, which he hopes to carry on to new generations.

Daka says he feels proud to have inherited such a special culture. To prove how pure Rahovec brandy is, he burned a small glass of brandy with a match.

“We have been dealing with this culture for a long time, we have a very long tradition. Based on word after word over the years, I am the sixth generation involved in the production of brandy and wine, maybe even more,” he says.

“It is known that Rahoveci has a tradition stretching over three thousand years of cultivating grapes, which produce brandy and wine,” he adds.

According to him, the drinks they produce here go all over Kosovo, and they also export to other countries. Meanwhile, the HardhFest festival helps them to promote their work to foreign tourists.

Winemaker Blerim Shulina, a third generation winemaker, says the annual festival in Rahovec is helping him to promote his products. He invited all visitors to visit Rahovec to drink local drinks that have reached top quality – and are now exported to Albania, Poland, Finland and Switzerland.

“HardhFest has now garnered quite a big response. Even two years ago, we had about 70,000 visitors and it creates an opportunity to promote the products of the country,” he says.

In honor of a much-loved poet

On the meadow where the grape festival is being held, you can see grapes from Rahovec and on them, the festival motif “Ca kokrra rushi..” (Some grapes…)

In honor of the late poet from Rahovec, Xhevdet Bajraj, this edition of the festival is entirely dedicated to him, starting from the motto, which is inspired by his book, Ca kokrra rushi të Rahovecit (Some grapes from Rahovec). 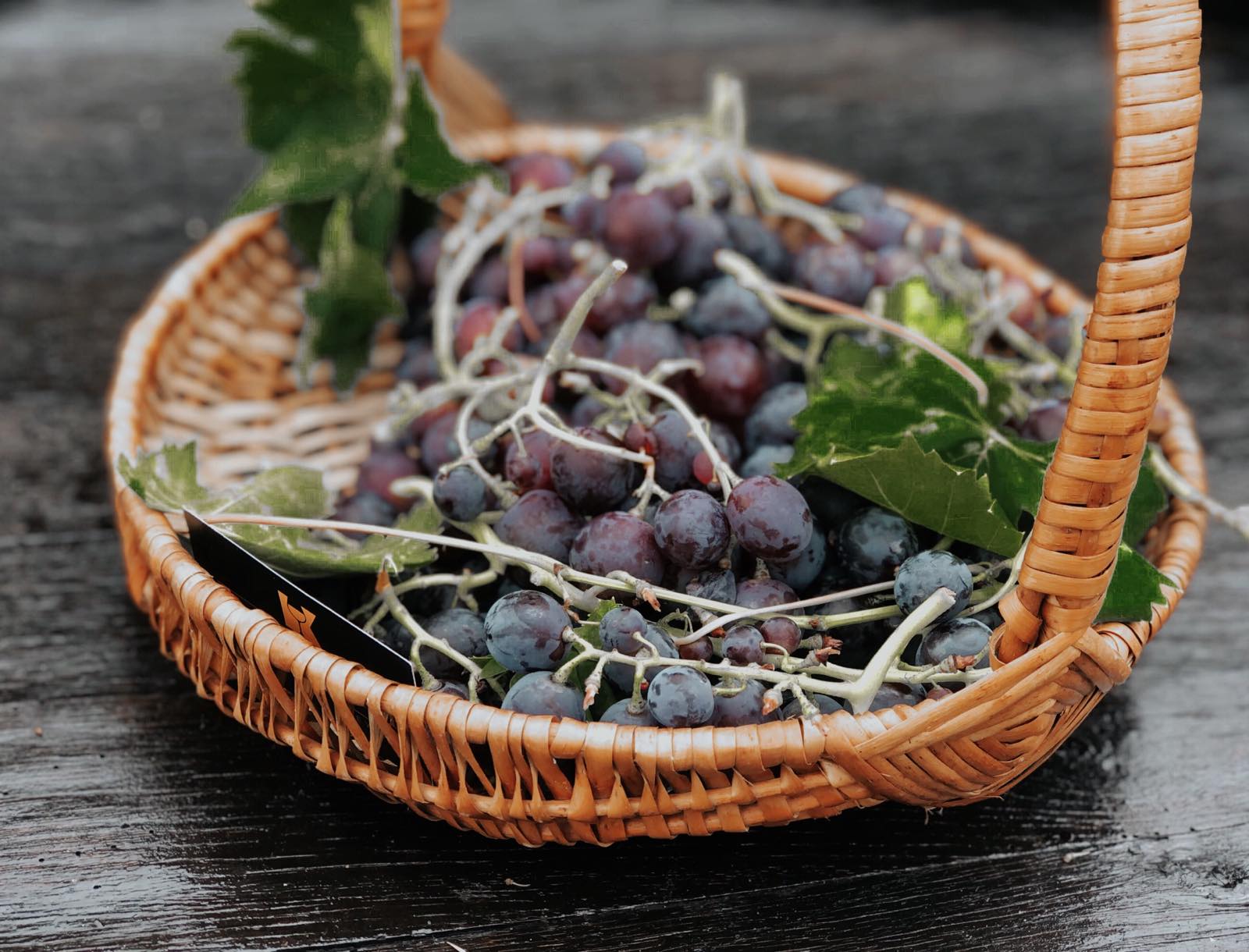 The design of the festival is made with an image of the well-known poet’s glasses, his iconic hat and eight grapes that symbolize the eighth edition of the festival. Bajraj died this year in the country where he had long lived, Mexico.

For the designer and one of the organizers of HardhFest, Agi Haxhimurati, the poet’s death was a sad surprise.

“This year is dedicated to Bajraj, who is also the godfather of the name HardhFest, which is short for vine,” he told Prishtina Insight.

Together with his wife, Muharrem Kabashi had come from the village of Opterushë to attend the festival. 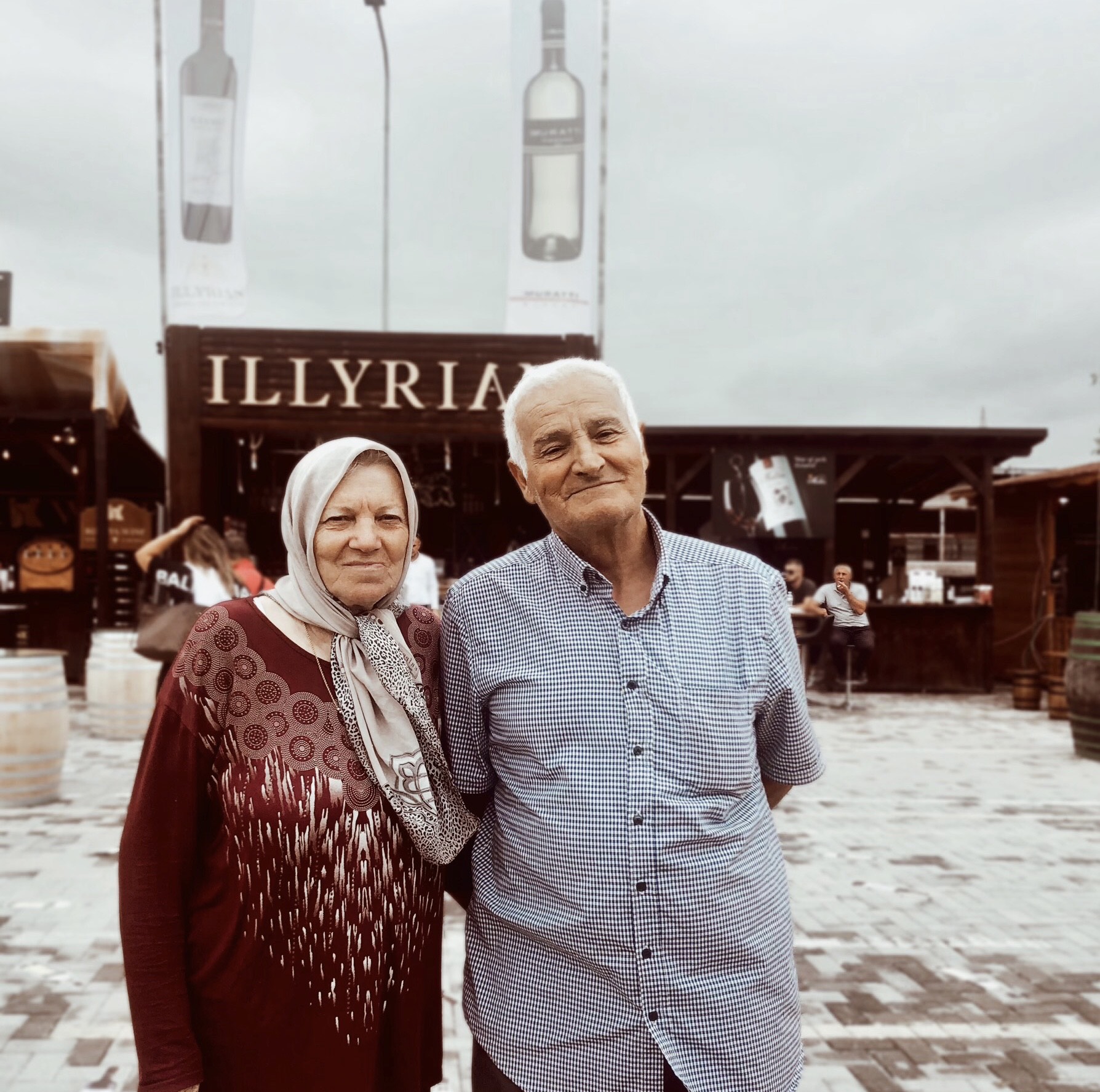 “I have been looking for grapes from France, grapes from Italy, and we have Suhareka nearby, but there are no grapes like the ones of Rahovec in the world,” he told Prishtina Insight, excitedly.

After visiting the festival in the evening, Kabashi said he will bring his nephews and nieces to see the celebration.

“I’m getting old, but I’ve already had a lot of fun. My soul is nourished by this, when I see calmness here…,” added the 71-year-old.

Food as well as drink

Flija, grilled food, sarma with cottage cheese and maize bread could all be found in a corner of the festival. The small businesses of the town see the festival as a good opportunity to preserve and serve the traditional foods of Rahovec, in addition to promoting their businesses at the festival.

Traditional chef Sadik Gashi, while preparing food for the guests of the festival, expressed his happiness that they were bringing their food to an environment with visitors from other cities of Kosovo as well as foreign tourists.

“Through HardhFest we have the opportunity to promote traditional food, as well as grilled food, but we come more for traditional Rahovec food, which is the basis of this festival,” he says. 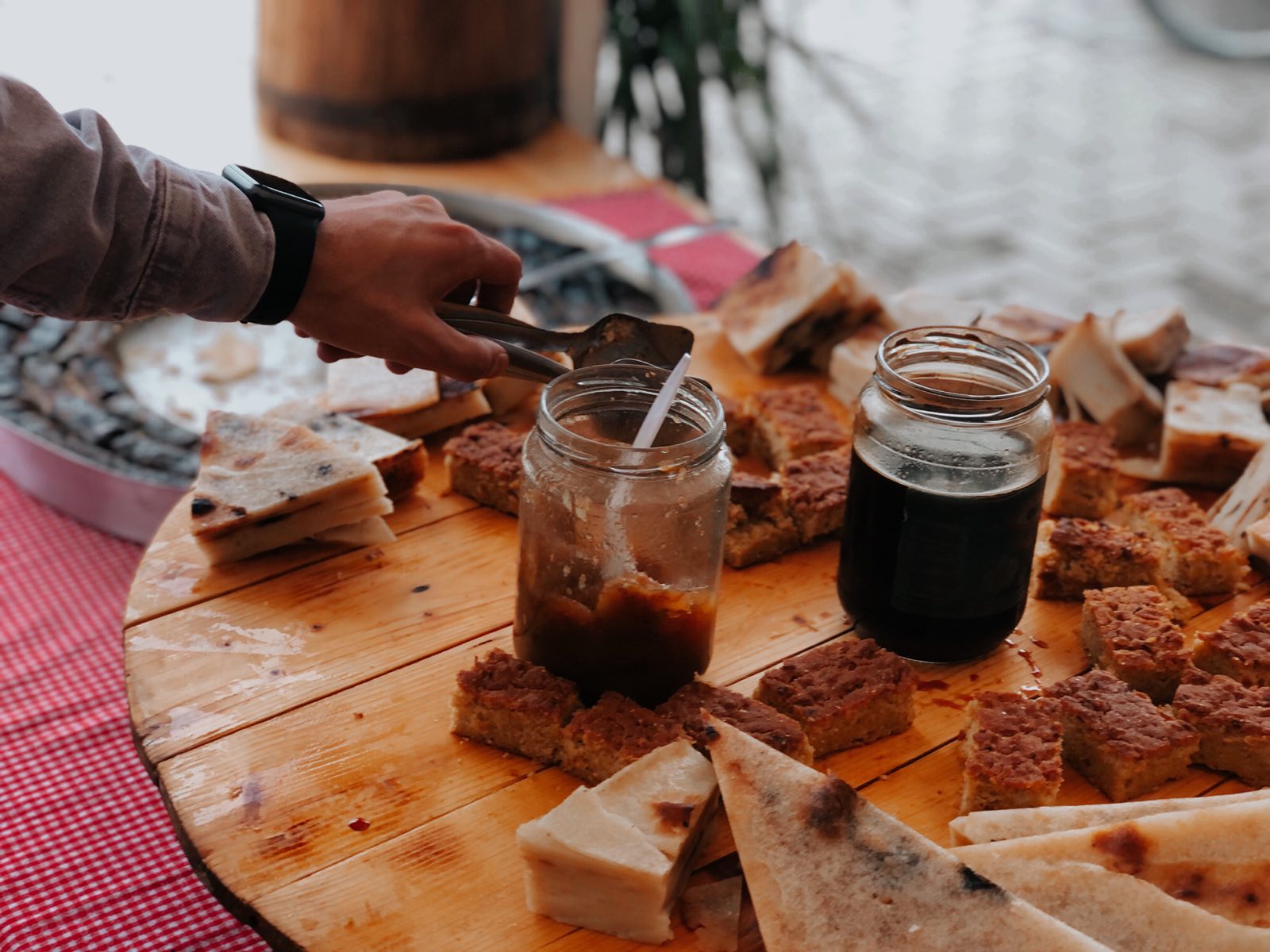 In addition to serving traditional food, in this edition of the festival, for the first time, through “HardhTour”, visitors can ride on tractors to see some  cultural heritage sites and natural beauties of Rahovec.

Haxhimurati said that through this innovation, tourists can visit various places they want to see in four trips over four days.

“The special feature is that they can ride with a tractor to enjoy the experience of a vineyard,” he says, indicating that visitors can see Ura e Fshejt, the House-museum of Ukshin Hoti, Maja e Shkodranit, the cellars of Rahovec, religious sites and many other objects of cultural heritage. 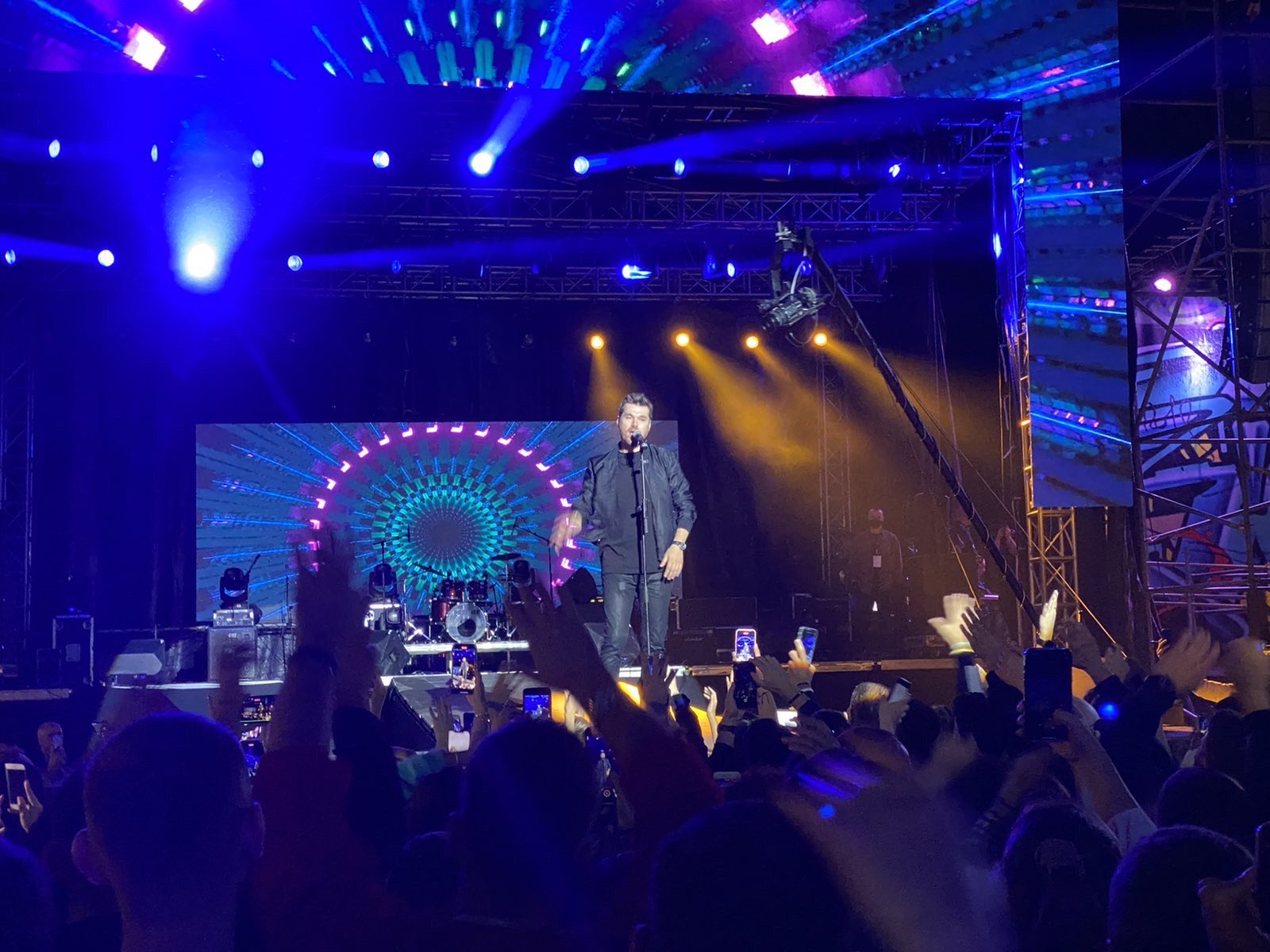 Besides days filled with many activities, the musical evening of the festival was attended by hundreds of people – despite the adverse weather conditions.

Although during the three days of the festival, from September 2 to 4, the weather was gloomy and it was expected to rain at any moment, that did not stop the visitors from enjoying the songs of Alban Skenderaj, Kip Winger, TNT, Minatori, Mentor Haziri and Hysen Kafexhiu. With selected songs, typical of the beginning of autumn, they were entertained with local drinks and music that suited the theme of the festival.