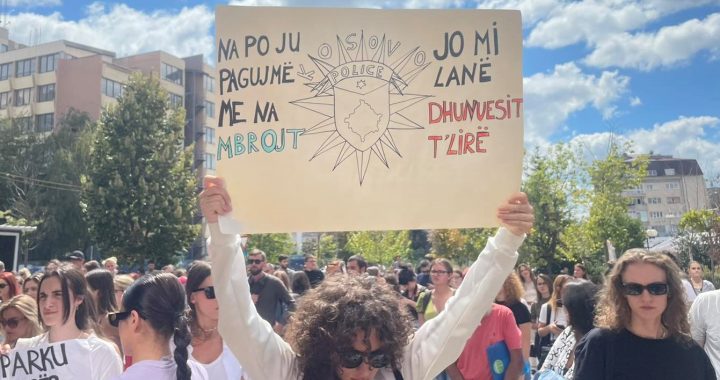 For the third time in a week, protests have been held over the rape of an 11-year-old girl in Prishtina, listing demands for the better protection of girls and women.

Hundreds of people gathered again on Monday in front of the Kosovo government building to protest over the rape of an 11-year-old girl in Prishtina.

The protesters are demanding the resignation of the judges and prosecutors involved in this case.

They also demand legalization of the use of pepper spray, the dismissal of the police officers handling the case and the creation of a specialized unit for sexual violence within the police.

In addition, their placards call for better security, justice, the rehabilitation of victims of sexual violence and the introduction of the subject of sexual education in schools.

Activist Fjolla Muçaj, from the Collective for Feminist Thought and Action, said the government should immediately implement all their demands as a starting point for changing the direction of the state in dealing with the security of women and girls.

“We will remain united and in revolt until all our demands are met and until this state pledges to come to the defence of every woman and girl of Kosovo,” Muçaj said.

The protest continued at the facility of the Judicial Council of Kosovo. Some protesters interrupted the conference of the Council with loudspeakers, making it impossible for it to continue.

This was the third protest within one week organized in response to the rape of the 11-year-old girl in Arbëria park in Prishtina. The crime has shocked public opinion.

Police on August 27 arrested five being accused of having raped the minor in the park.

BIRN afterwards reported that, according to the prosecutor’s file, the girl was reported earlier as a victim of human trafficing, and that six other men were accused of having raped her on June 21, two months before the later case, in different motels around Prishtina. Nobody from this group had been arrested.

BIRN reported that these six suspects were not arrested until the news about her rape in August was published in the media.

According to the Prosecutor’s Office file, the identification and arrest of the suspects followed examination of the minor’s phone. According to the file, it took more than two months for policy to get the results of the phone examination.

After BIRN‘s report on the matter, the six other men accused of the earlier rape in June were arrested and will be held in detention for 30 days.

Two other protests were organized last week in Prishtina, one of them massive, for the same reason. The case sparked protests in Tirana, Albania, and Skopje, North Macedonia, as well.

In total, so far 11 men have been arrested in connection with the case, for the two separate cases.

Police told BIRN that a preliminary investigation has begun to verify the actions of the police who handled the two cases. The head of the police and the Director of Prisons have since resigned.