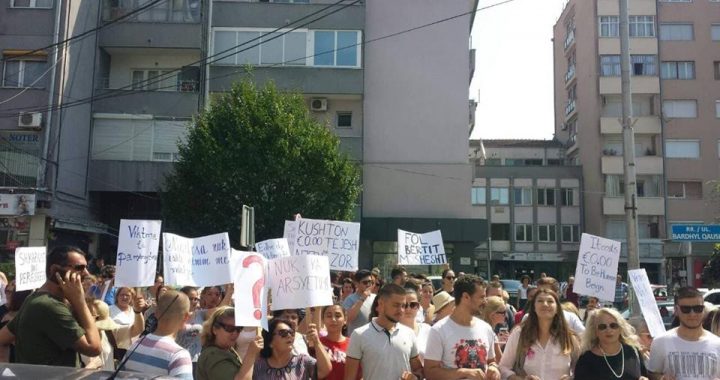 Activists protest murder of woman and child in Gjakova

Dozens of protesters marched in Gjakova today to protest the negligence of Kosovar institutions after a man in Brekoc shot and killed his former wife and daughter.

Carrying banners saying “Don’t justify the culpable” and “React in time,” civil society activists in Gjakova, supported by women’s organizations from around the country marched from the city park to the Small Carshi in Gjakova to denounce the murder of a 40-year old woman and her nine-year old daughter.

The protest was organized after police reported Valbona Nrecaj and her daughter were killed at their home by her former husband Peter Ndrecaj with an automatic rifle by on August 7 in the village of Brekoc.

Police also reported that the victim had sought help from the Gjakova police five hours prior to her murder, claiming her former husband was sending threatening messages. The police tried to find the suspect, but failed.

Marching with the activists, former President Atifete Jahjaga denounced the murders, and wondered how it was possible after so many cases of domestic violence and murders that there are still no measures in place to lead to prevention.

“How many more missed calls do we need to have, how many more lives need to be extinguished, before our institutions react? Who will ensure responsibility for these crimes, which are relentless?” Jahjaga said.

On Friday, Kosovo Police also held a press conference justifying its own actions in dealing with the case of the threats against Valbone Ndrecaj.

“The complainant came to the police station in Gjakova together with her two brothers and told us that she had received threatening messages from the suspect. The police began the search for the suspect. Unable to find him, we tried to contact him via telephone, but this was impossible,” Hasi said.

Hasi also emphasized that the victim did not ask for police protection.

“We continued the search for the suspect until we received the information that firearm shots were heard in Brekoc of Gjakova at 9:00 pm,” Hasi said.

Activists have called for an end to the murders of women and children, a series of cases which have shocked the public in the past few years. In April 2017, Kosovar activists protested the minimal sentencing for the murder of Zejnepe Berisha, whose husband had stabbed her 20 times. The case was appealed and Nebih Berisha was given a prison sentence of 17 years.

On Saturday, August 11, activists have called for another protest in downtown Prishtina.