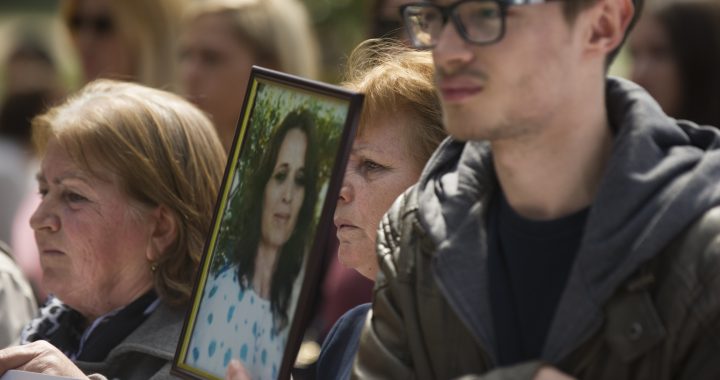 Dozens of citizens gathered in Prishtina’s main square to protest the 'lenient' sentence given to the murderer of Zejnepe Berisha, who was stabbed by her husband 20 times in 2015.

“Our request is very clear and concise: the issued sentence for the killer of a domestic violence victim, of the late Zejnepe Berisha, must be appealed by the prosecution and the maximum sentence for the criminal act must be demanded,” said Adelina Berisha from Kosova Women’s Network, KWN.

On October 23, 2015, Zejnepe Berisha was murdered by her husband Nebih, who stabbed her 20 times with a knife in their home. In the process he also hurt their daughter, who witnessed the murder.

On April 12th, the Basic Court of Prizren found Nebih Berisha guilty of murder and light bodily harm. He was sentenced with 12 years of prison.

“The decision of the Basic Court of Prizren has upset the entire Kosovar society, including us as Kosova Women’s Network. Immediately after the decision, we reacted publicly through a release sent to the media and our partners, to express our concerns that this sentence is very short,” Adelina Berisha explained, adding that Zejnepe Berisha’s case was exceptionally alarming since she had reported domestic abuse to the Kosovo police years before her murder.

“Such a sentence is not proportional to the crime committed by the husband of the deceased,” said Adelina Berisha. The minimum for murder according to Kosovo’s Criminal Code is a 10-year prison sentence, while the maximum is a life sentence. “Since she was a victim of domestic violence for years, we believe that the prosecution did their job poorly. This is a minimal sentence.”

Nevertheless, the defendant’s lawyer Esat Gutaj said that the sentence was too high. The lawyer said that the client had another motive to commit this criminal act, which was not mentioned by the panel of judges. He said he would appeal.

“We hope that the strategy to claim limited mental capacity is based on fact, and not just a justification to lower the sentence. Regardless, we do not justify the murder,” commented Adelina Berisha.

“He deserved the maximum prison sentence. We did not expect such a short sentence. I was invited by the prosecution as a witness, but the prosecutor never interviewed me, nor my husband. We do not accept this decision. We are helpless,” Thaci said. “She lived with him for 16 years; 16 years she lived under duress.”