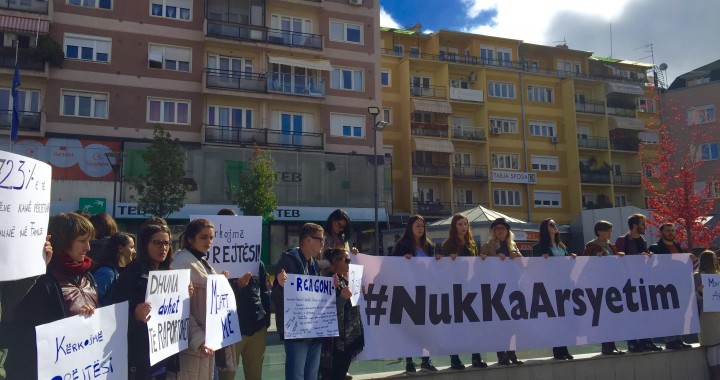 After a video of a young woman being beaten by members of her family went viral on Friday, more than 200 people protested in central Prishtina against domestic violence.

Civil society activists, Assembly members from Gjakova, activists of Kosova Women’s Network, and individuals protested today against domestic violence after a scandalous beating of a sixteen year old in Rahovec.

The beating, filmed from a distance with a camera phone, appeared online on Friday. The video depicts a brutal beating of the minor girl by three men, and spread quickly on social media, infuriating human rights activists. The men are seen kicking a supine 16-year-old girl who lies immobile on the asphalt, and then picking her up and putting her into a car.

The police declared that they were handling the case by detaining the chief suspect, the victim’s uncle, for 48 hours. The victim’s mother told local media that the girl had been skipping class and that she had asked her brother-in-law to help discipline her daughter. “It’s nothing,” the mother said about the beating.

Rallying behind the slogan “There is no justification,” activists gathered in Zahir Pajaziti Square at noon on Monday.

Standing in front of over 200 protesters, Adelina Berisha, an activist of the Kosova Women’s Network, said that they gathered to denounce the violence which. “was witnessed by everyone.”

She said she hoped that the protest will make authorities deal with the case.

“I hope that we don’t have other protests and I hope that citizens become aware of violence and that institutions do their job properly. I know that this can’t happen only with this protest but we started with this one and then we’ll see if there will be [a need for more protests] and how we will continue in the future,” added Berisha.

According to research by the Kosova Women’s Network, domestic violence is present in both rural and urban areas.

“During last year, based on a research that we made, it appears that 60 per cent of Kosovo citizens are victims of some form of domestic violence,” Berisha said.

The research shows that 68 per cent of victims in domestic violence cases are women, while around 30 per cent are men.

“These are worrisome numbers and they show that this phenomenon is widely spread in our families, and that we must fight it,”  said Berisha.

Eighteen to 24-year-olds are most affected by domestic violence, according to the study.