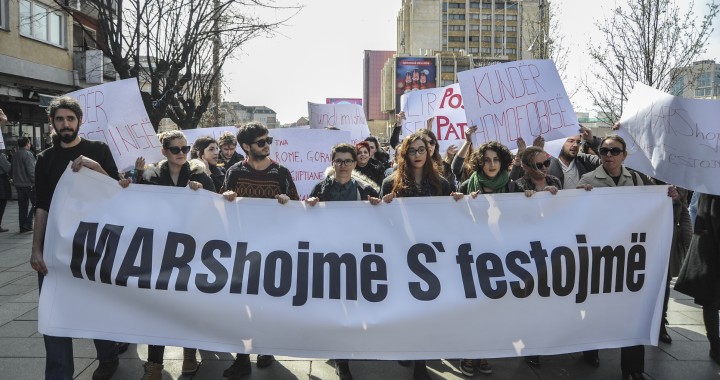 While the country’s leaders lay wreaths to mark March 8, women and men march in protest against discrimination of women in Kosovo.

Prishtina’s Mother Theresa street is lined with flower purveyors selling their wares for International Women’s Day. A group of feminist activists passed by without buying anything, waking towards the government building in an action they dubbed, “We March, we Don’t Celebrate.”

“Today we march, we don’t celebrate, because we have a prime minister that told us yesterday that we graze, while today he calls us symbols,” said Igballe Rogova, director of Kosova Women’s Network at the action.

Rugova, whose organization co-ordinated the march along with the Youth Initiative for Human Rights, the University of Prishtina Program for Gender Studies and Research  Artpolis, the Center for Equality and Liberty (CEL), Kosovar Gender Studies Center (KGSC), and Albanian Feminism, was referring to one of Prime Minister Isa Mustafa’s recent posts on Facebook, which criticised feminist activists by calling them “women who have grazed all possible funds from the West.”

Protesters carried signs with messages saying “Against Homophobia,” “Against Misogyny,” “Down with the Patriarchy,” and “Gender Justice.” Several banners targeted the prime minister himself: “Oh Isa, we have come to graze,” “Isa, we diss ya” and “Prime Minister, we graze because you were asking for it,” referring to a common excuse given for harassment or sexual assault.

“The reason I’m protesting today even though I’m a boy is because I don’t want to see my mother and sisters suffering in a place where women’s rights are not respected and women are seen as a symbol and not as human beings,” said Ramadan Sokoli, a man who joined the march.

Activists also went around in white masks changing the names of streets to honor famous women from Kosovo history. Zahir Pajaziti street was renamed Nekibe Kelmendi, after a lawyer and human rights activist and a member of parliament with Mustafa’s LDK party before her death in 2011.

Rexhep Luci street was ‘renamed’ for Melihate Ajeti, one of Kosovo’s pre-eminent actresses during the Yugoslav era.

“Dear women, Today we mark your day, because you are and remain a symbol of life in its entirety, a symbol of civilization, development and the country’s civilization. I congratulate you on this symbolic day! Every day is your day.With reason it is said that the development of women determines the development of a nation. In our country, you are the symbol of emancipation, a new spirit, not only within the family, but anywhere in society, in the state’s governing and organization, in education, economy, art and culture.

Mustafa also laid a wreath of flowers at the Heroinat statue, which was erected and dedicated last summer in the memory of women who were raped and killed during the 1998-99 Kosovo War.

“As their legacy, women have left the future of the new generations in Kosovo, they left the freedom and Kosovo’s independence, a space where Kosovo people can live very well.”

Kosovo President Atifete Jahjaga also laid flowers at the Heroinat statue before going to a gathering for female police officers with her former colleagues. (Before becoming Kosovo’s first female president, Jahjaga served as Deputy Director of the Kosovo Police.)

Kosovo still suffers from high rates of domestic violence, street harassment, and low female workforce participation. In October 2015, Kosovars were outraged when Zejnepe Bytyqi Berisha from Suhareka was killed by her husband Nebi Berisha, who had previously subjected her to physical and psychological violence for 16 years without intervention from the police.

A recent report from the Kosova Women’s Network found that two thirds of women in Kosovo have been victims of harassment.

As far as women in the workplace are concerned, according to World Bank Data from 2013, Kosovo has one of the lowest rates of women in the workforce in the world, at 21.3%, placing between Saudi Arabia and Lebanon. A recent study by the D4D think tank found that only one in ten women in Kosovo is employed, and that this poses a major obstacle to the country’s development.

While the country has made strides in acknowledging female victims of wartime violence as a separate category in need of assistance, Kosovo has not yet adopted a mechanism to get them the financial and psychological help they need.