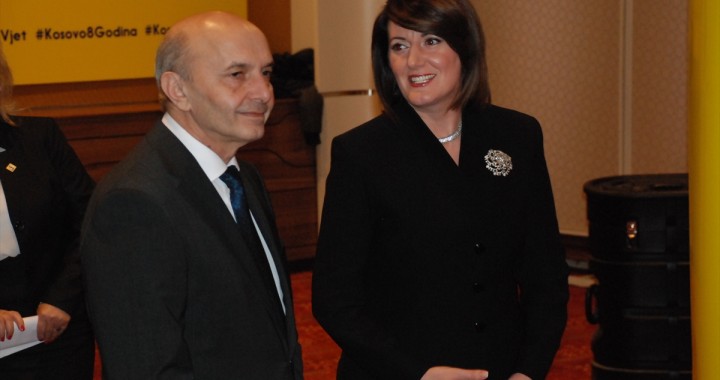 A day after a Kosovo Assembly session was interrupted multiple times by tear gas and held only with the violent exclusion of opposition MPs from the room, Kosovo’s Prime Minister published a controversial status on his Facebook account, which he recently reopened. The status attacks civil society for their reactions to the events which unfolded in the Kosovo Parliament on February 19.

Responding to an online petition for the withdrawal of US Ambassador Delawie, who raised the ire of Kosovars after he called the opposition’s behavior on Friday the 19th “disgusting,” Mustafa wrote a convoluted status calling the petition’s creator “a terrorist” and other petitioners “women who have grazed all possible funds from the West.”

Mustafa’s message also coincided with a reaction published by the Kosova Women’s Network on Saturday, through which the women’s rights group condemned  the violence used against MP Albulena Haxhiu, who was hurt by security personnel in the Parliament lobby the previous day. Haxhiu was taken to the hospital, but her husband was not permitted to visit her, with police present during her medical check up. Civil society organizations including the Kosova Women’s Network (KWN) raised concern about her treatment.

In his status, on Saturday afternoon, Mustafa wrote:

“I’m ‘afraid’ that [those people] are leaving Kosovo because they’ve lost their minds, these are some women who have grazed all possible funds from the West, [and I’m afraid] that they will leave their husbands and go to North Korea (because even Cuba would not accept them) or some nationalist NGO people, that will march/aim towards the East. Either way I respect USA more.”

It is not the first time the Prime Minister Mustafa’s use of Facebook has raised eyebrows. In October 2015, Mustafa deactivated his Facebook account, saying he had been the target of cyber attacks. His withdrawal from  Facebook came days after strange posts about the opposition leaders Albin Kurti (who was called a donkey) and an obscure reference to the Radoniqi Lake and Ramush Haradinaj.