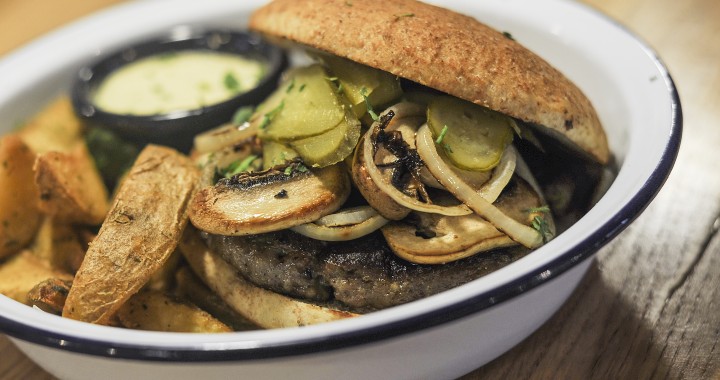 An overview of some of the best and most notorious burgers served in the city’s meat joints.

Having lived in Prishtina my whole life, it is safe for me to say that trying all of the burgers in town would be one a heck of a challenge.  Most burger joints offer practically the same thing: a well-seasoned beef patty sheltered in fresh salad, laden with mayo, ketchup, and mystery sauces, all shoved in a pitalka bread. Yet, there is variety even in a town chock full of traditional pleskavica.

Since I’ve never bothered comparing them before, here’s a select few that withstood the intricate evaluation of my taste buds.

Juicy patty on a whole-wheat bun at Papirun

The first adventure I took my taste buds through was Papirun’s beef burger. Located right across the street from Grand Hotel, Papirun’s new location is very clean and has simple yet pleasant décor. Generally speaking the vibe of a place matters little if the food is up to par, but I must say it did add to the experience. It is worth noting that the staff were very friendly.

Having tried virtually all their sandwiches before (and having enjoyed them), my expectations were quite high. I was truly impressed by how it looked like at first glance: a nice, round platter containing a rather large hamburger accompanied by golden wedges and a seasoned mayonnaise dip. Although small in quantity, the side dish complemented the burger very fittingly. Crispy on the outside and fluffy on the inside, the wedges whetted my appetite for what followed.

It caught me off guard. The first I noticed was the almost impeccable bun-to-meat ratio. The thin bun was a bit dry, but it the fact that it was whole-wheat made up for that. In all honesty, I quickly lost focus on the bun after my teeth punctured the meat: it was sufficiently grilled, good quality meat and frighteningly juicy. Despite the fact that it was tremendously delicious, it lacked proper seasoning. Resting right above the meat was a layer of caramelized onions and fresh pickles that surely compensated for the lack of condiments. Yet, what really made me “wow out loud” were the savory mushrooms that I had missed at first. Although it consisted of many tasty components, the burger was physically solid and not at all cumbersome to eat. At a price of 2.90 euro it is a bit costlier than your average burger in the city, yet certainly worth every penny.

I made my way towards Route 66, a largely frequented fast-food joint, to try their infamous ‘Patriot Burger.’ I had had the burger once before, but it was so calorically overwhelming that I needed to taste it again on an empty stomach to get an unbiased impression. 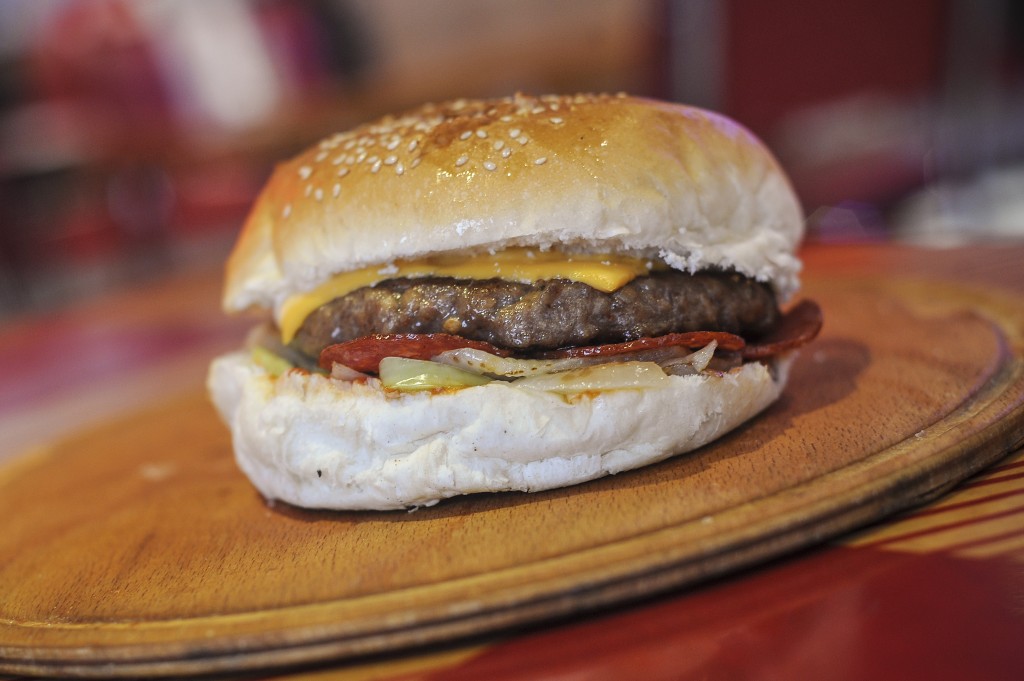 The interior contained scores of red-dominated, US-influenced motifs. Although the staff were very welcoming and friendly, it took a while until I was able to lay my hands on the burger.

When I first saw it, I was genuinely astonished by its size. It had a fairly soft bun and a tremendously juicy midsection. Halfway through, I noticed that the burger had scattered slices of suxhuk tucked between the meat and bun. Along with a few chili peppers and pickled vegetables, this fiery beef burger undoubtedly made me feel Albanian. The side dish consisted only of a moderately-sized bundle of dry French fries with condiments, but it was honestly quite redundant considering the colossal size of the burger. At well over 3 euro, it felt a bit overpriced, yet no less of an adventure.

The final showdown: Aba vs. Skenda

Still reeling from the crippling effects of the Patriot, I set out to try and solve one of the most remarkable culinary dilemmas in Prishtina: ABA versus Skenda. Both ABA and Skenda are located at the beginning of the road towards Germia park, a couple of minutes north of the Clock Tower. Even though they’re literally steps away from one another, their burgers have stirred a fair amount of controversy among habitual burger enthusiasts. For what it’s worth, I cannot exclude myself from this group. 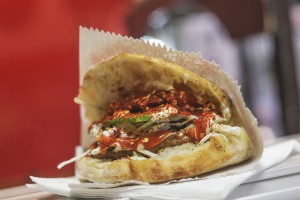 Considering it was midday, I thought my order would be delayed, but the exact opposite happened at Skenda’s. I managed to snatch a small cushioned chair and made my order. Although there were only two people handling all the customers, they were very laid back and friendly. To my surprise, I received the burger in less than five minutes, and I didn’t even have to jump the queue.

The burger looked pretty standard: not too big, not too small. It had no side dish, but since they only served takeaway food, it didn’t bother me too much. The bun was too crispy but the taste was OK. Apart from your ordinary salt and pepper, there wasn’t anything breathtaking seasoning-wise. I did not expect for the meat to be outstanding, but it actually turned out to be rather juicy. I cannot deny that the fresh lettuce and tomatoes – selected and sliced right in front of my eyes – enhanced the taste overall. At only 1 eur per burger, it’s as cheap as it gets. The only downside is that you might be tempted to get another one as soon as you finish the first.

Still (hardly) standing, I was committed to finishing what I had started and immediately went to Skenda’s’ neighbor, ABA. Stomach rumbling and feet shaking, I ordered a burger and a cup of ayran to go with it. It literally took one minute for them to assemble the burger and give it to me (don’t take this speed for granted though, the place is very well known to overflow with high school students at different times of the day). 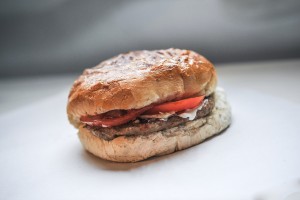 Again, no side dish – the burger was served takeaway style. It tasted almost uncannily identical to its neighbor at Skenda. The meat and vegetables were quite decent, and I liked the fact that they had also added fresh onions to the mix. The bun was puffier than all the others I had tried previously. The decisive factor, to be honest, were the delicious cheese and red pepper sauces that Skenda’s unfortunately lacked. Even though the difference is very slight, the better of the two is the burger at ABA’s.

If anything, when it comes to burgers in Prishtina, the main takeaway is that the chances of disappointment are slight. With regards to taste, style and overall dining experience, Papirun’s burger undoubtedly wins this round. As burger shops pop up on every corner, there are many other qebaptores that are aiming for the crown. Yet, after this culinary marathon, it’s time for me to hit the gym.