Stranded between Macedonia and Greece, 14,000 refugees are stuck waiting for EU and Turkey to broker a new migration deal which could seal off the border and seal their fate outside of the EU.

GEVGELIJA, Macedonia / IDOMENI, Greece— Senaa Suleyman does not know it, but she and her husband, brother and three children are following in the footsteps of many journeymen from bygone eras.  She’s held at a camp, just before she can pass Stone 59, a makeshift border point between Macedonia and Greece, erected recently for her and the hundreds of thousands of asylum seekers en route to Western Europe in the hopes of a better life. It is only the latest border on her journey away what was once a posh life in Mosul, which had become increasingly precarious as ISIS took control over the city.  She kept going to her job as a nurse at the Al Khansaa hospital until ISIS bombed her house to retaliate against her uncle, an engineer who fled to a Kurd-dominated region in the north instead of working for the Islamic State.

“I had a good life, I was friends with my Christian colleagues even though I am Muslim,” she says. “Daesh killed my brother, stole my car, and TNTed my house. I had to leave.”

Suleyman shows a photo of her house in Mosul, which was destroyed by ISIS. Photo: Tim Judah.

Stone 59 has been a key juncture on the road that 90 to 95 percent of legal asylum seekers take to Europe, and now a key determinant of who will reach their desired destination or not. In November, Macedonia abruptly stopped admitted anyone who is not “SIA:” Syrian, Iraqi or Afghani, part of a plan from Western Europe to stanch the flow of migrants. After a new EU plan inked on Monday, Stone 59 is where all of the asylum seekers trying to reach Europe will be stopped. At midnight between Tuesday and Wednesday, Slovenia, Croatia and Macedonia jointly stopped accepting any new refugees.

“The Balkan migrant route does not exist anymore,” Slovenian Prime Minister Milo Cerar announced on Tuesday night in an interview with the state broadcaster. Only those with “proper documents, a valid ID card, a passport and a (Schengen) visa are welcome to come to Slovenia,” he added.

According to the deal, Turkey, which already has 2.6 million Syrian refugees living on its soil, is to accept the return of refugees and migrants who reach Europe in exchange for more money, expedited EU accession talks, and a fast track to visa-free travel for Turkish citizens to Schengen countries. For every refugee sent back to Turkey, Turkey is to send one refugee for permanent resettlement to the European Union.

Ahmad Abdullah Ayna, 29, Palestinian from Syria who is traveling with his 69-year-old grandmother, his cousin and his cousin’s two-year old son.
Ahmad was born in the UAE, grew up in refugee camps in Syria, and then went to Lebanon, where he was not able to find permanent work despite finishing a degree in business, because of the law on employment for refugees.
He found temporary work with NGOs in Lebanon, and became certified as a yoga teacher. He hopes settle in Austria and continue teaching yoga there as a hobby.
“Every morning when I wake up and get out of the tent I see Moroccans and Algerians and so many others just looking at the border,” says Ayna. “It is like a dream for them.”

“The days of irregular migration to Europe are over,” announced European Council President Donald Tusk after the negotiations. Tusk said the deal has been accepted ‘in principle’ by the European Council but needs to be further elaborated at a meeting on March 17.

Stone 59 is about 100 meters from the Idomeni refugee camp in Greece, where some 14,000 are now stranded. The new deal makes it is the front line in Europe’s struggle to close the borders.

“The border of Europe will be on the Macedonia-Greek frontier and we will respect the decisions which were made,” Croatian Minister Vlaho Orepić said as the border closures were announced.

Suleyman, who is a Kurd from Iraq, was lucky to pass Stone 59 before the new regulations. But the 14,000 people sheltering at a camp built for 1,500 are not so lucky. 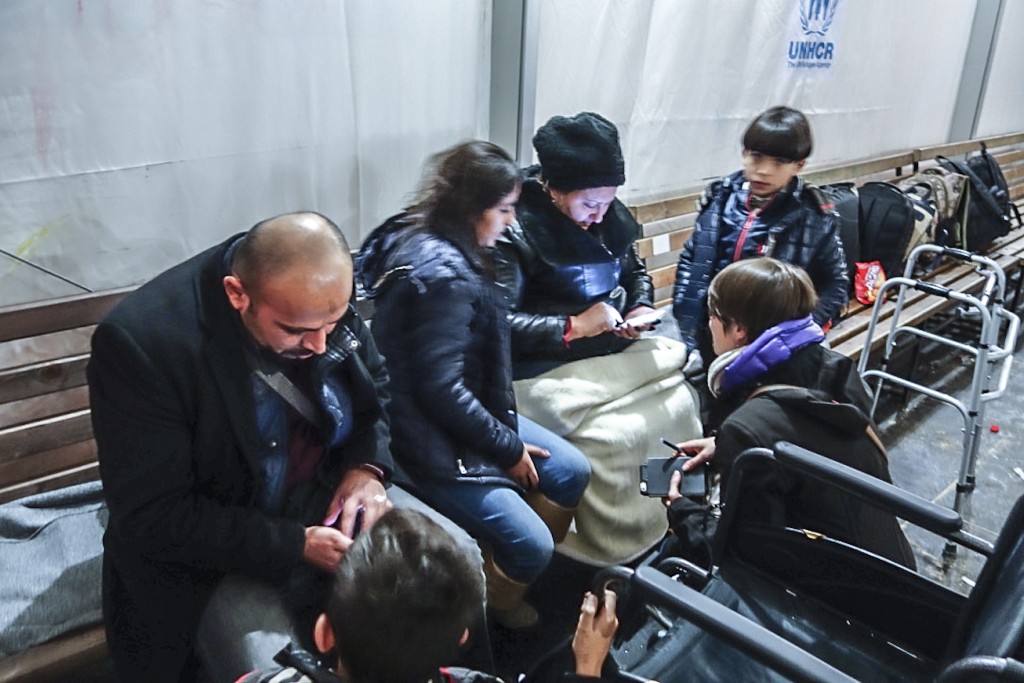 In Idomeni, Qamad Ahmad Noor is pacing around, worried. His and his wife Neelam, who is 9 months pregnant, journeyed all the way from Pakistan, walking across Greece to reach the border with Macedonia because their nationality meant they were not eligible for the buses provided by Greece.

“The Ahmadi minority is persecuted in Pakistan,” he said, with an imploring voice. He says he wants to go to Germany or the Netherlands because they are aware of the troubles faced by his religious community in his home country.

“They told us, you are Pakistani, go home or go back to the camp,” he complains.

Noor is one of the 1.25 million asylum seekers have arrived in Europe since the beginning of 2015. Thousands continue arriving in Greece every day, but it is unclear where they will go now.  According to the UNHCR, the U.N. refugee agency, there are about 1,500 migrants in Macedonia and approximately 1,000 in Serbia, and it is likely that they will be stuck for some time.

Jasmin Rexhepi, of the human rights NGO LEGIS, one of the first to provide assistance to asylum seekers before it was legal for them to use public transport, is concerned that the EU is externalizing a problem that his country cannot handle. Asylum seekers waiting for a train at the Gevgelija camp. Photo: Tim Judah

“Macedonia cannot go it alone. This needs to be done in conjunction with Greece, Turkey, and the whole EU, not only here.”

Macedonia, he mentions, is mired in its own deep political crisis, launched when opposition parties began boycotting parliament sessions and releasing so-called “bombs,” recordings of wire-tapped phone conversations which targeted thousands, with a focus on almost all top government and opposition officials and public servants. The wiretaps, in which leaders discuss plans to engineer elections, rig courts and clamp down on the media, triggered a crisis that is currently being mediated in fits and starts by the European Union, including a largely unimplemented agreement forged last July by EU Enlargement Commissioner Johannes Hahn.

After a brief war in 2001, tensions between ethnic Macedonians and ethnic Albanians, who make up a quarter of the population, remain high. A police raid last year in Kumanovo on May 9 on a heavily armed group of Albanians saw an hours-long shootout, which killed eight police and ten gunmen, and wounded 37.

Ahmad Abdullah Ayna, 29, a Palestinian from Syria, has been waiting in Idomeni for five days because his grandmother lost her documents, and copies are being sent to the camp via DHL before they can proceed to Macedonia. He agreed to show Prishtina Insight around the Idomeni Camp.

Analysts worry that the ruling government, which has been in power for almost ten years, will use the refugee crisis to curry favor with the EU in the hopes that it will help keep them at the helm.

“The refugee crisis is used by the ruling political parties to show how important it is to remain in power,” says Malinka Ristevska, director of the European Policy Institute in Skopje.

Ristevksa worries that the ruling party plays on is the crisis at the European level, encouraging the European mediators to believe that they are the only party who can keep Macedonia stable and therefore control the migrant flows. 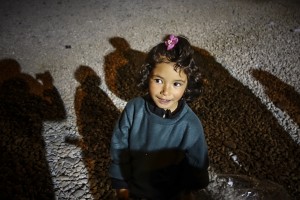 The new deal raises concerns beyond the scope of Macedonia, however. The United Nations has already said that that the new EU plan would violate international law.

“I’m deeply concerned about any arrangement that would involve the blanket return of anyone from one country to another without spelling out the refugee protection safeguards under international law,” the head of UNHCR, Filippo Grandi, said at the European Parliament in Strasbourg. The international organization Save the Children is also protesting the deal because one in four asylum seekers is under 18 years old.

Senaa Suleyman, the Iraqi from Mosul, will likely make it to Germany with her family, but the future remains uncertain for those left behind. At the rundown Hotel Hara, a few kilometers from the Idomeni camp, some sixty asylum seekers from wait for night to fall so they can cross the border with smugglers.

One of them 16-year-old Nadira from Somalia, who was planning to attempt to cross the Greek border into Macedonia for the fourth time with her ten brothers and sisters, who keep returning to the border after being bussed to Athens. She wants to reach Germany or the Netherlands and study medicine.

“Al Shabaab killed my father,” she says, hanging her head when recalling the violence of the east African terrorist group. “How can anyone say my country is not at war? There is serious fighting in Somalia. We knew we had to leave everything because we are looking for peace.” 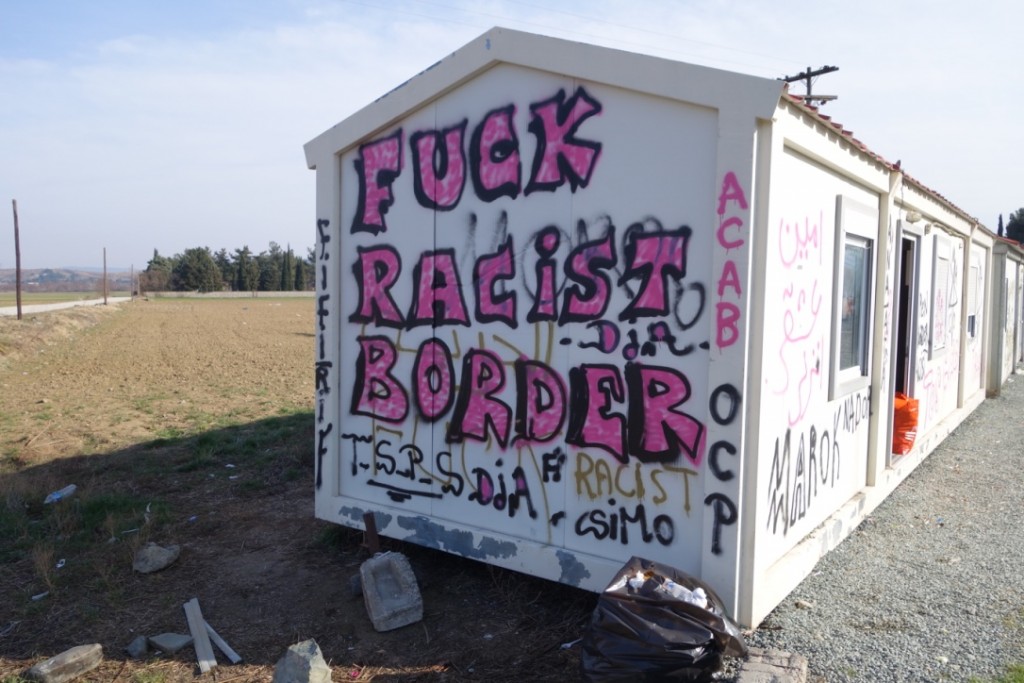 A container near the Idomeni Camp. Photo: Tim Judah.