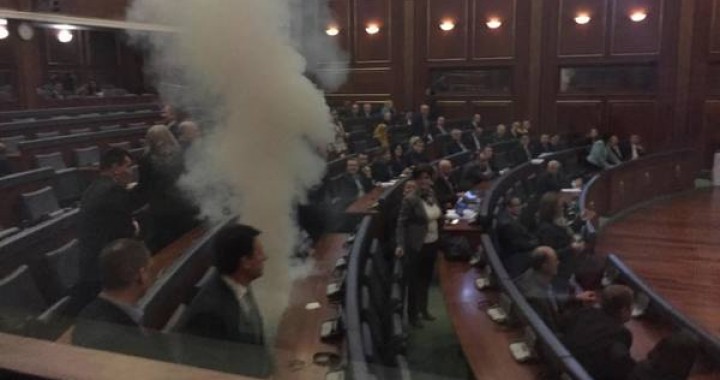 Kosovo Assembly has been interrupted by opposition MPs who, in a now routine course of events, set off tear gas shortly after the session began.

Today’s session at the Kosovo Assembly has been interrupted by opposition MPs who, in a now routine course of events, set off tear gas shortly after the session began.

As the meeting got underway, opposition MPs began banging on their desks to disrupt the session’s proceedings.

Soon after, the first canister of tear gas was set off.

“You could not refrain from doing that could you?”  asked Assembly chairman Kadri Veseli before calling a break.

After MPs re-entered the chamber, PDK MP Xhavit Haliti called for the security to leave the chamber. “There is no need for you to be here,” he said. Shortly after, the session was once more interrupted by tear gas.

After entering the assembly for the third time, opposition MPs directed lasers at Minister of Interior Skender Hyseni and Haliti in order to interrupt their speeches.

After blocking the podium together with his fellow opposition MPs, Ismail Kurteshi from Vetevendosje called on the government to contribute to the normalization of the political situation and also requested Isa Mustafa’s cabinet to resign.

“We will not come back for today,” Vetevendosje MP Shqipe Pantina said before all opposition MPs left the chamber. Another Vetevendosje MP,  Mytaher Haskuka, was seen hurling water towards the prime minister Mustafa. They refused to give statements for the media.

LDK MP Teuta Sahatqija took the podium and spoke about the tear gas.

“I think that we MPs have been poisoned by tear gas at the Assembly for many months. A lot of members of parliament are complaining about respiratory problems, headaches and other medical issues after inhaling tear gas, nevertheless we will continue staying here and represent our voters,” Sahatqija said.

Prime Minister Isa Mustafa also criticized the opposition and commented on the attacks at his residence.

“There is no reason that the opposition is behaving this way and there is no reason for them to attack us inside and outside the assembly, and I think that the law should not allow that. I did not want to publicly talk about the attacks on my house, but if Molotov cocktails are thrown towards a prime minister’s residence, there is something wrong,” Mustafa said at the podium.

The PM insisted that the government has not made unconstitutional decisions, and invited opposition MPs to return to the Assembly.

“I guarantee that we did not infringe upon any article of the Constitution and the government has taken full responsibility to respect the [Brussels] deal,” he said, referring to an EU-brokered deal with Serbia signed in August 2015 that would give Kosovo Serbs more autonomy.  Elements of the deal were found unconstitutional in a December decision by Kosovo’s Constitutional Court.

“It cannot serve as a reason or right for inviting citizens to attack their own country. I invite the opposition to come back to the Assembly and voice their objections for the deal.”

“Our MPs have withstood unprecedented violence and have had their lives threatened. Nevertheless, they have given their all in not allowing the state to be blocked,” he said. “I want to voice my regrets that a part of the opposition are applying the agenda of this country’s destruction,” he declared.

Baki Kelani, spokesman of the Kosovo Police, declared that Vetevendosje MPs Mytaher Haskuka and Salih Salihu were taken into custody.