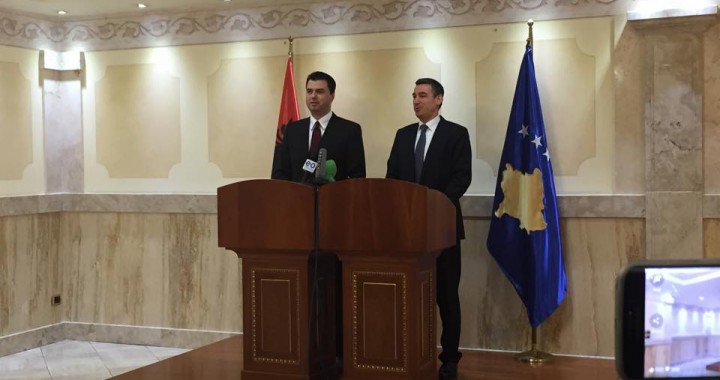 Basha and Veseli at a joint press conference.

Albanian Opposition Leader: Tear gas is not a model

Lulzim Basha, leader of Albania’s opposition and head of Albania’s Democratic Party, says that they will not consider tear gas a model for their activities.

During a visit to Prishtina, Basha commented on the local opposition’s modus operandi at a press conference after a meeting with the head of the Kosovo Assembly Kadri Veseli.

“We will not consider tear as a model and I do not believe that it is a model for the Parliament,” said Basha, whose party accuses the ruling coalition of corruption and disputes on-going justice reform brokered by western diplomats. The Albanian opposition has staged violent protests and has thrown eggs in the Assembly.

Kadri Veseli stated that Kosovo and Albania face similar challenges and that the priority of both countries is EU membership.

“There are no issues that divide us, there are only issues that unite us. There are mutual challenges through which we aim to develop as independent countries. I’m specifically talking of issues pertaining to economic development and advancements in the process of global integration. Our common priority is EU integration,” Veseli said.

He also met with Prishtina mayor Shpend Ahmeti, who is from the opposition party Vetevendosje, which advocates for Kosovo\s union with Albania.

Ahmeti said that they discussed local and national development.

“We had the chance exchange thoughts on the latest local developments in Prishtina and Tirana, but also national progress in the Republic of Kosovo and the Republic of Albania,” Ahmeti said.

Basha added that his regard for the citizens of Prishtina and the the progress of the municipality remain unchanging.