On a bus running from Prishtina to Fushë Kosovë, just outside of the capital, people get on the bus unhindered. Except for a woman who is holding a baby in her arms. The door shuts in her face, right before she can get in. The bus starts, leaving behind both the crime scene and the victim, a beggar woman with dark skin, a Roma.

It is a windy day in Fushë Kosovë. Per usual the sidewalks are busy with children going to school. The Roma, Ashkali and Egyptian children walk in groups until they approach the school, where they separate and each goes to his or her class. While they walk, one of them asks a shopkeeper if he could drink some water from his water hose with which he’s cleaning the ground. His hand gestures and his facial expressions signal that the child will be helped, but the shopkeeper turns the hose towards the child’s head and makes him all wet. He stands in the wind, soaking wet, and with open arms he wordlessly asks, “Why?”

The answer is a cynical smile.

These are some moments that separately revolted us, the two authors, and inspired us to find a way to fight the disgusting racism in Kosovo. 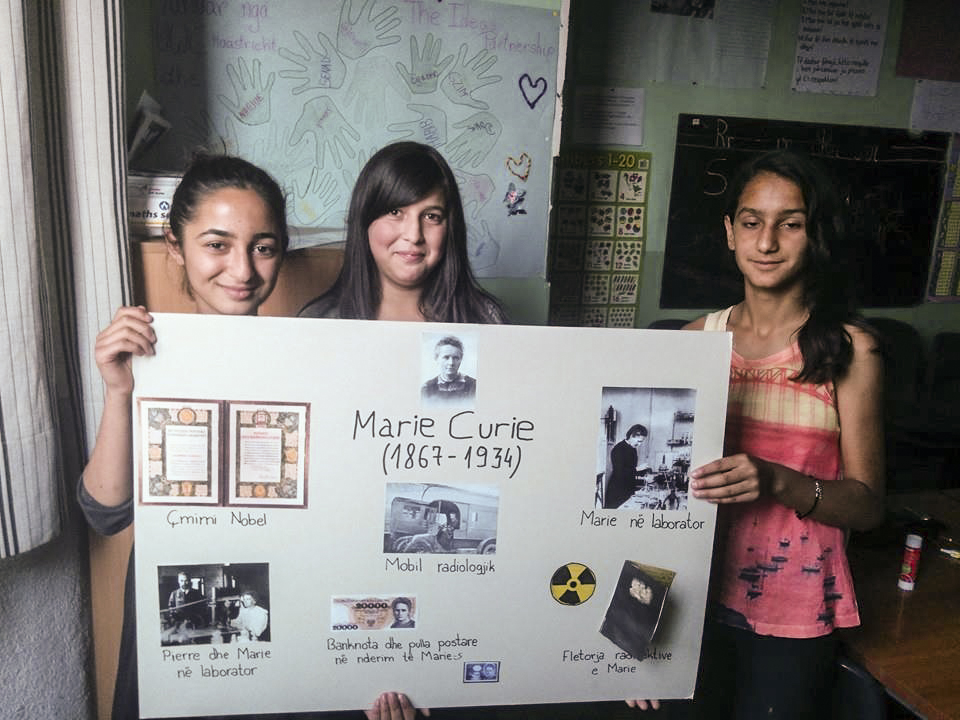 The Little Teachers’ girls presenting the life and work of Marie Curie.

Now we volunteer through an NGO called “The Ideas Partnership” teaching a group of 15 children.  The group is called “Little Teachers,” and they were selected because of high test scores. In addition to taking extra classes from us, these pupils also serve as volunteers for other children of their community, teaching reading and writing to children from their community who don’t go to school. For us, they are the future intellectuals that will represent the Ashkali, Roma and Egyptian communities of Kosovo. We want them to be better prepared than their Albanian colleagues when they go to university.

We, the authors, met each other during a student protest and started to discuss the desperate political situation, the typical banter exchanged by Kosovo youth. Endless problems. Any commitment today is just one brick in the wall that will be built in the next 20-30 years. But is there anything that can’t wait? Is there something more urgent? 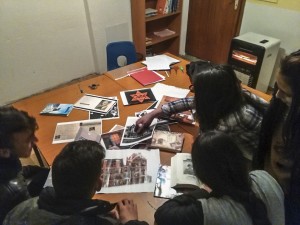 Yes. “Our Negroes.” The fact that our society has incorporated racist behavior. One can hear frustrated parents complaining to their spoiled children by saying “don’t be like a magjup.”  In Albanian, “magjup” an offensive term used to describe Roma people. When one wants to offend the other, he might call him “magjup” as well. Even in more sophisticated discourse, locals and internationals often make no distinction between Roma, Ashkali and Egyptian communities. They’ve gone that far that now they include all three identities in just one by calling them RAE. The origin of these communities in the Balkans is described in many studies and there are a lot of disagreements over it. Commonly it is assumed that these communities  belong to a nomad population that moved from India in fourth century BC. The roots of Roma, Ashkali and Eyptians in Kosovo is supposed to be the same but the difference is that the Egyptian community were originally nomads who first stopped in Egypt and then continued on to the Balkans. Ashkali people stopped first in Persia and then came to Balkans, while Romani people seem to have come to the Balkans directly.

We both have been poor. In the ‘90s when our parents weren’t allowed to work, when we lived in  apartheid – we were poor. We were the equivalent of “negroes.” Our schools had separate classes for Serbs and Albanians. We were 40 “negroes” crammed into a class of 20 square meters.

We marched against apartheid. At the age of 8 we participated in dangerous protests.

We were refugees. We were ashamed when the teacher would come to our “home” during summer vacations with all our classmates to congratulate us on our birthday. Ashamed to be the little birthday boy with a fake smile between a burned house and a garage that he now must call “home.”

Two years ago we started volunteering with children of various ages, from 6 to 15 years old of Roma, Askali and Egyptian communities in Fushë Kosovë. Then we selected 15 of them for our philosophy course. Most of them are 13-15 years old. We’ve been through a lot.

Arian Maloku explaining the center of mass while balancing a triangle.

Together with the children we chose an unconventional way of learning. We jointly pick some topics and then elaborate them carefully.  Our position in space, language, and general cultural knowledge are the three key sources we learn from. The first one includes all the mathematical and logical actions necessary to determine the position of a point in space. Every one of us is a point, staying somewhere in space in a particular position towards other points. We communicate with the other points through language, which enables our ability to think. Points speak as much as they understand. They should be able to express with words everything they think. “I don’t know how to put it,” doesn’t exist in the world of points. They learn about the history of crucial sociological and scientific moments. They must know what has been thought until today, so they can think about innovations.

We have become one with the group. Some time ago while asking the children about a person in their neighborhood one of us said: “Is he from our community?” The children laughed. One of them put his hand on the chest and said, “Yes, he is from our community” putting an emphasis on the difference between “us” and “them,” while smiling full of admiration.

We are both students, one studying electrical engineering, the other philosophy. This way we make sure that the children learn how all the scientific understanding starts with the mere amazement of the critical mind. 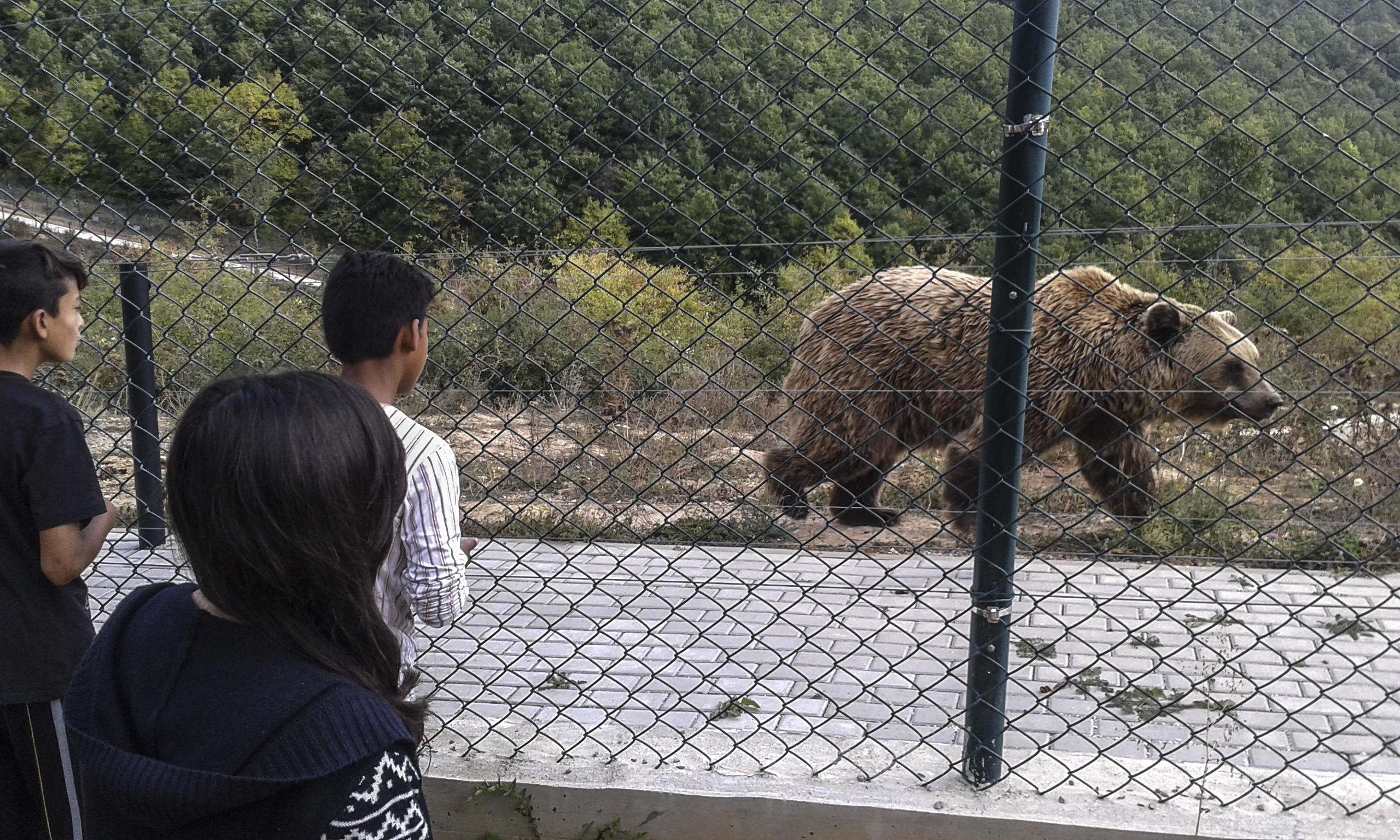 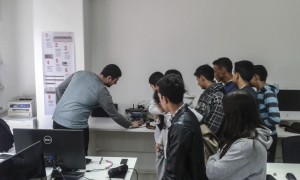 The Little Teachers observing a 3D-printer at the Innovation Center Kosovo.

Some months after we started, the British Embassy in Prishtina decided to support our group. Now we have a small but greatly helpful fund for study visits. Through these excursions,  “the Little Teachers” get to know more of Kosovo and its history. They’ve learned about 3-D printing and the latest technology innovations and what it means to be a developer in a visit to the Innovation Center Kosovo; they’ve learned about bears and the human impact on nature by visiting the bear sanctuary at the artificial lake of Badovc. They now know more about the history of religion after visiting the Monastery of Visoki Decani, the half century old Mosque of Sinan Pasha in Prizren, and the Tekke of the Halveti sect in Prizren. Soon they will visit the Kosovo Assembly, in whose seats they might very well sit one day.

Some months ago they were privileged. For the first time in their life they were sitting in seats reserved only for them. The Kosovo Philharmony reserved 15 seats for our group and we listened to a concert of classical music. The oppressed of this society, privileged to such an “aristocratic” event. More than that, surprisingly we saw that the children were welcomed by everyone. People were saying hello to them. People were accepting them. Somehow they felt good about children’s presence. Maybe it was a rehabilitation of their own consciousness.

The little teachers are eager to learn and they absorb everything. They themselves asked for our classes to be held twice a week. Isn’t this a strange request from teenagers? It is rare to find teens that want to have extra lessons after they finish their day at school.

Our group also watches movies together. We go to the cinema. Inside Out taught us how our emotions are produced.  We saw Brad Pitt as Achilles in the movie Troy. We also watched Die Welle, a German movie about a professor who decides to simulate a fascist movement in order to show his students that it is possible to recreate one, since his students say it is impossible.

Through movies and history lessons, our little teachers now know the difference between anarchy, autocracy and democracy.

The Little Teachers chose to have a monarchy. Watch the coronation here. Shortly thereafter, the group chose to transition to democracy.

While learning medieval history, little teachers decided to declare their class an absolute monarchy. We had a coronation ceremony for a King. Soon the need for a revolution emerged. The queen plotted against her own husband. Protests took place in our class. Similarities with the play Animal Farm that we watched at the National Theater were obvious. Then we analyzed and compared events in our class to historical moments such as the French Revolution. But in our class heads didn’t roll: “Habemus pactum” (We have an agreement). Soon the “Magna Carta Libertatum” (The Great Card of Liberties) of “the Little Teachers” group is going to be signed. In March, new elections will be held. For the first time we will start functioning as a democratic group. A president with a limited mandate will be elected.

We have learned about the Roman Empire and about ancient Greek civilization. We have studied mythology. We are ready for philosophy now.

Sophie’s World is the book we will read in the next three months. Each chapter represents a philosophical moment and we are going to write essays related to every chapter. We will find out to which philosophical school of thought each of us belongs. Our discussions in the future are going to be of a higher intellectual level.

Compared to other children of Kosovo, our “Little Teachers” will go to university knowing about philosophy, movies, historical events, innovations, theater plays and more than that, about solidarity. We share what we know, our modest knowledge, because it is the only thing in the world that when shared gets bigger and bigger.

Albanian Opposition Leader: Tear gas is not a model

by Amire Qamili
Next: Features