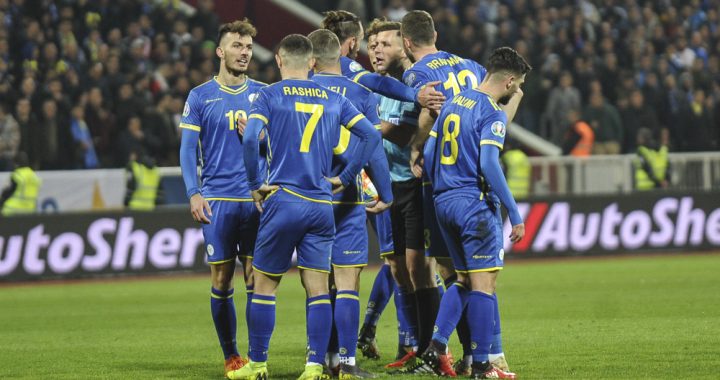 Smatterings of applause mixed with boos and whistles as the full time whistle rang out at the Fadil Vokrri Stadium in Prishtina last night, bringing to an end a 1-1 draw between Kosovo and Bulgaria. The hostility was mainly directed at the match officials, who had allowed Kosovo’s Bulgarian guests to waste time with impunity as the game drew to a close, but a sense of deflation also prevailed.

The hype surrounding Kosovo’s qualification campaign for Euro 2020 had reached fervent levels in the days preceding the opening game with Bulgaria, with a hugely encouraging performance in a warm up match against Denmark only adding to the anticipation.

While Kosovo Head Coach Bernard Challandes had been attempting to play down expectations all week, by the time kick off came around it seemed few had been heeding his advice. Amid an explosive atmosphere, a stadium wide tifo display was unveiled as the teams took to the pitch, encouraging Kosovo’s Dardanians (the team’s nickname derived from an ancient tribe that settled in the region) to dream on.

In many ways, it felt like Kosovo’s genuine debut in a qualifying competition for an international tournament. The campaign for World Cup 2018 had been full of historic firsts, but it was also riddled with obstacles and positives were clung to, but rare. This time, Kosovo were playing on home soil, rather than making four hour trips across the mountains to Shkoder, and qualification was beginning to be spoken of as a genuine possibility.

But only 45 minutes into the campaign, that prospect was already looking fragile. While Kosovo had enjoyed the majority of possession and played by far the more creative football in the first half of the game, their more experienced and organized opponents were 0-1 up.

It wasn’t a situation that had looked likely in the first ten minutes. It took Kosovo less than nine to carve open the first chance, with Celina playing a perfectly weighted pass to leave Rashica bearing down on the Bulgarian goalkeeper, Nikolay Mihaylov. Only a desperate slide from full back Anton Nedyalkov that cleared the ball from the goalline prevented Rashica from opening the scoring for Kosovo.

But as the half went on, the Bulgarian side grew in confidence, becoming a compact and disciplined unit that allowed minimal space for Kosovo’s forwards. Ugly confrontations between the players broke out after a series of reckless tackles, the referee reaching for his yellow card four times in the opening period.

Eventually it was Rashica whose frustrations led to a mistake, the winger playing a nonsensical backwards pass to concede a corner. As the ball was delivered into the penalty area, Bozhikov outmuscled Kryeziu far too easily and headed Bulgaria into the lead.

Kosovo fought back immediately, Rashica stinging Mihaylov’s palms before Mergim Vojvoda placed a header too close to the goalkeeper, but they went in trailing at the break. A palpable sense of disappointment hung around the Fadil Vokrri Stadium.

Vojvoda had another opportunity early in the second half, his shot deflecting wide after Vedat Muriqi had hit the post, but it wasn’t long until Kosovo were level. Another magnificent run from Arber Zeneli ended in another spectacular strike into the goal in front of the stadium’s northern stand housing Kosovo’s Dardanet fan group, just as it had against the Faroe Islands, just as it had against Azerbaijan. This was the best of the three.

Chances came to win the game in the final half an hour, a Zeneli free kick left Mihaylov standing statuelike but drifted wide of the far post, before Rashica had a third chance to add his name to the scorers but could only find Mihaylov’s gloves.

After the game, Challandes told the press of his mixed emotions at what he had witnessed, disappointed with the result but proud of the team’s courage and fluid football. Kosovo now find themselves in third place in the group, behind Bulgaria and runaway leaders England, though both have played a game more. But the point also ensures Kosovo sit above Montenegro and Czech Republic, who have both had their goal difference significantly damaged by conceding five goals to England.

While it is a dignified position to be in for a side entering the first qualification tournament played on their own soil, it’s hard not to imagine how much better the standings would look if one of Kosovo’s numerous opportunities had been converted into a second goal.

June’s trips to Montenegro and Bulgaria now seem that bit more pressured, even if Challandes insists it is good performances rather than good results which he seeks. For now, the Dardanians dream is not yet dashed, but it does seem slightly more distant.