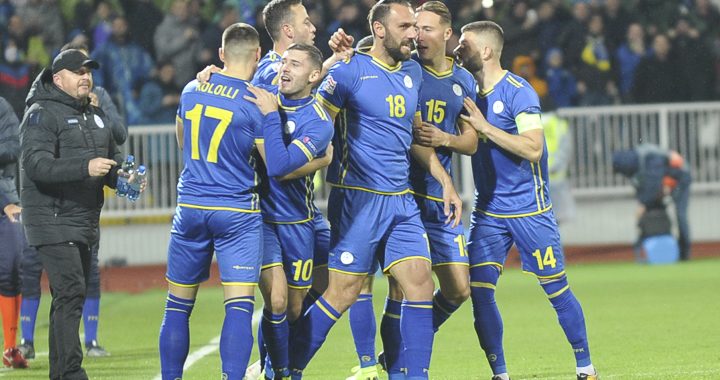 Only two days after a five-nil victory against the Maltese national football team, Kosovo secured another major win on Tuesday against Azerbaijan at the ‘Fadil Vokrri’ stadium in Prishtina, scoring four goals and conceding none.

The Azeri goalkeeper yielded to three shots by midfielder Arber Zeneli, scoring the first in the second minute of the game, and another shot by center-back defender Amir Rrahmani in the second half. Despite higher possession and two shots on target, Azerbaijan scored no goals.

The first match between Azerbaijan and Kosovo, played in Baku in September, ended with a 0-0 draw.

Dominating League D, group three, with four victories, two ties and no losses – gathering a total of 14 points – Kosovo was promoted to League C of the UEFA Nations League, leaving behind Azerbaijan, Malta, and the Faroe Islands.

Alongside the Kosovo national football team, Georgia, Belarus and Macedonia were also elevated to League C. These four teams will face each other in March 2020 play-offs to determine who will take one of the four remaining places for UEFA Euro 2020, a European men’s football championship that is organized every four years.

Kosovo will face Macedonia at the one-off semi-final at a date yet to be determined. If victorious, Kosovo will play against either Georgia or Belarus for the spot at the European championship that will be held between June 12 and July 12, 2020.