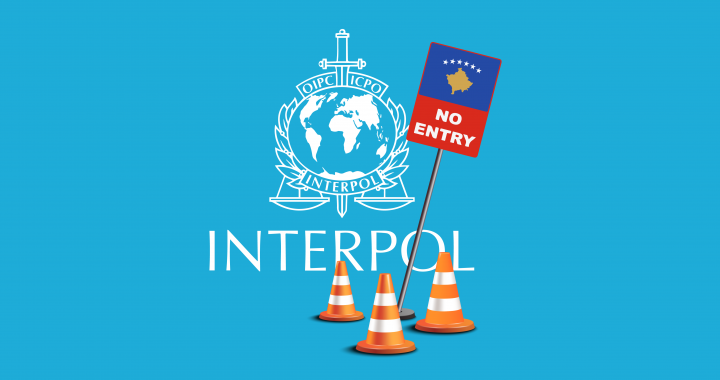 Kosovo’s failure on Tuesday to join Interpol should serve as an example to Kosovo politics. The dialogue with Serbia needs to change, and politicians should build new internal momentum for unity.

Kosovo’s bid to join Interpol failed to muster support from the members of the biggest criminal information sharing network in the world.This marks the second large-scale defeat for Kosovo in foreign policy since the failure to secure membership in UNESCO in 2015.

Unlike with UNESCO, membership in Interpol was considered a purely technical process led by the Kosovo Police through the technical working group actively preparing the application, liaising with international partners, informing member states and promoting globally Kosovo’s bid in Interpol. Otherwise, votes would be secured through diplomatic channels of Kosovo and its supporting countries.

In principle, with Kosovo in Interpol, the benefits would be multiple. Kosovo would benefit from the proactive exchange of information to successfully fight transnational organized crime, terrorism and other security threats.

Indeed, this diplomatic failure marks a significant setback for Kosovo, requiring a serious re-consideration of Kosovo’s foreign policy, but also the internal functioning of the country.

The voting results at the Interpol General Assembly reflect what we – as citizens of Kosovo – have been witnessing in the past years: the diplomatic obstacles, the lack of new recognitions, withdrawal of recognitions from the concerning number of countries that have reconsidered their decision, and stagnation in the efforts to join multilateral mechanisms.

Failed membership in UNESCO, Interpol, lack of progress for visa liberalization and non-existent perspectives for EU or Council of Europe membership are clear indicators that Kosovo does not have a clear and concise foreign policy strategy, and more importantly, it does not have the capacities to successfully deliver on its own foreign policy objectives.

In addition to the failed diplomacy efforts, there are other key factors behind the Interpol debacle in Dubai, and three main elements have played a crucial role in the voting process.

Firstly, look to geopolitics and new realities at the global level. The weaker presence of the United States of America in multilateral platforms has had a significant impact in the process – especially in the case of Interpol, where the US has led the process of securing votes. The strength of Russia’s opposition and that of its allies comes as a response to what Russia could not block internationally in 1999, namely the decision for military intervention in Serbia, and then in 2008 Kosovo’s declaration of independence.

Secondly, consider the small country element. With almost no presence in international organizations and weak economic and financial capacities, Kosovo has very little to offer in exchange for a vote. This becomes particularly important considering the methods that Serbia, a UN member with stronger economic standing and political sway, has used to decrease the number of countries voting for Kosovo membership.

The ongoing EU-facilitated dialogue with Serbia resulted in complete dependence of the process on Serbia’s attitude towards a membership bid. The aggressive diplomatic moves of Serbia against Kosovo’s Interpol membership, paired with Russia and China’s influence, are the key factor behind this process. The political combination of this trio resulted in effective negative influence over some Latin American, Asian and African countries.

Interpol is a pure result of Kosovo’s lack of clear strategy and weak approach to the dialogue with Serbia.

If back in 2011 Kosovo had administered an independent foreign policy in which dialogue with Serbia represented only one factor of many, today Kosovo’s success in foreign policy fully depends on its relations with Serbia and the outcomes of the EU facilitated dialogue.

It is imperative that the political leadership in Kosovo take a step back, carefully analyze the current circumstances, and create a common platform that will consist of a set of conditions in the dialogue process.

There is a need for change in approach, even if that includes the change of the chief negotiator. It is important to think beyond the three alternatives – the status quo, the Association of the Serb Majority Municipalities following the Republika Srpska scenario, and the partition or exchange of borders – which have been served to the citizens to create the perception that there is no solution beyond these alternatives.

If Kosovo continues to keep its borders on the table and subject to discussion in Brussels, there will be little to no chance for Kosovo to succeed in the international arena. Reaching closure with Serbia is a political necessity but that does not imply that Kosovo should sign another “ambiguous” agreement pushed by the EU without clear implementation strategy or an international guarantee that the agreement will ensure full explicit mutual recognition.

The possibility for border corrections that have circulated in the last few months may have influenced the drop in support for Kosovo’s membership in Interpol. After the vote Kosovo President Hashim Thaci immediately hinted that without an agreement with Serbia, entry into international organizations will remain a challenge.

As the responsibility for the defeat of the bid becomes attached to the Kosovo government, Thaci’s solution for the dialogue may be bolstered by this failure and legitimized in turn.

While Kosovo has been recognized by more than 100 countries, and the support for its membership bid could not achieve even 70 votes in favor, it seems that support for Kosovo as a player in the international arena is fading.

Under these circumstances, anything that is less than recognition will give Serbia the tools and the political power to further block Kosovo’s participation in multilateral mechanisms – the only platforms where Kosovo as a small state can assert itself internationally.

Indeed, Serbia has been listed as the main reason behind this failure. While this is partially true, it is also true that this argument has been widely used as a political shield for those who yesterday, following the debacle in the voting process, should have resigned and taken full responsibility for the failure.

This result should be a wake up call for the all institutions in Kosovo, who share the burden of failure, and should take responsibility in the process of the dialogue with Serbia.