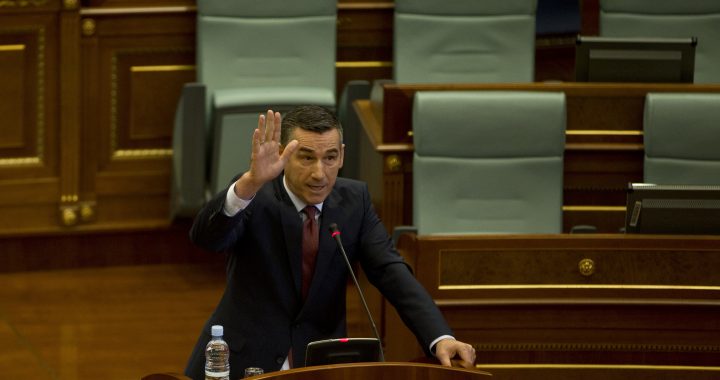 Kosovo Assembly Speaker Kadri Veseli is pushing for a new resolution on the dialogue with Serbia, while opposition parties LDK and Vetevendosje opt out after failed attempts to approve a resolution against the president's involvement in the dialogue.

Members of the government coalition in the Kosovo assembly convened last Saturday, invited by Kosovo Assembly Speaker Kadri Veseli, to draw up a draft resolution on the Brussels-mediated dialogue between Kosovo and Serbia, aiming to involve representatives of opposition parties in the process, and send it to a vote.

The six-point draft resolution starts off with a reference to “the tragic past and the struggle of our people for freedom and independence,” and sets out that the dialogue delegation mandated by the assembly should have four representatives from the opposition, one each from Vetevendosje, Alternativa, the Democratic League of Kosovo, LDK and the Social Democratic Party, PSD.

According to the draft resolution, the core delegation should be made up of Deputy Prime Minister Fatmir Limaj as leader, Foreign Minister Behgjet Pacolli as deputy leader, and members Dardan Gashi, Mahir Yagcilar, and Avni Arifi, who would be obligated to report to the assembly during the course of the dialogue.

The main point made by the draft resolution is that the dialogue between the two countries should ultimately lead to a “legal agreement that is internationally mandatory” and that would result in mutual recognition. Further, the draft reads that Kosovo’s territorial integrity is inviolable and that the country cannot be partitioned.

The last point asserts that all matters regarding territory, peace, alliances, the army and political issues, including all possible agreements between Kosovo and Serbia, need to go through the assembly and have approval by two thirds of members in order to be ratified.

Veseli, said last Sunday that the resolution should not be seen as a political move by the coalition, but rather a proposal that is in the country’s interest.

“We have tried to encompass and harmonize all positions and statements expressed in this period regarding the final phase of the dialogue with Serbia,” he said. “I invite my colleagues in the opposition to put aside their party differences and become part of the dialogue process.”

Today, Veseli once again gathered several members of the assembly to discuss the draft resolution. While the major opposition parties, LDK and Vetevendosje, were not part of this meeting, PSD and Alternativa responded positively to the invitation.

After the meeting, Veseli said that the draft is open for further additions that may be in the interest of the country.

“The resolution that we proposed includes everything that the coalition and the opposition talked about,” he said. “[It] is open if there is a need to add things that are of interest and that can strengthen our confrontation with Serbia.”

Foreign Minister Pacolli wrote on Facebook that the content of the resolution creates possibilities for a consensual representative structure that involves the whole political spectrum.

“The elimination of the possibility of infringement of Kosovo’s territorial integrity and sovereignty  positions the country in every format and context of the dialogue. It is time to project a new energy, and become stronger than ever before from the internal debate about the dialogue,” he wrote.

Reacting to the proposal, Leader of Vetevendosje Albin Kurti said that President of Kosovo, Hashim Thaci, who has been vocal on the possibility of “border corrections” between Kosovo and Serbia, wants a resolution in order to violate it.

The opposition has already proposed two resolutions regarding the dialogue in the past, both of which have not been voted on.

The first resolution, proposed by PSD, was discussed among members of the assembly, but did not amass enough support to make it to the vote.

The second resolution, initiated by LDK and supported by all opposition parties, and which specifically countered Thaci’s involvement in the dialogue, was scheduled for discussion and vote in early September, but never made it to the floor due to consecutive delays and lack of quorum.

There has been no plenary session at the assembly for the past three weeks, and it is unclear when and if the resolution will make it to a vote. While the assembly presidency has the competence to schedule sessions, member of the presidency Aida Derguti said that she did not receive an invitation for a presidency meeting.